Thoughts on using your device to charge batteries

Going away for a couple days without the family. I was going to leave the battery charger here for my wife to use and take my Triad so I don’t have to worry about a charger. I’ve read all kinds of opinions on charging through your mods. Just curious how the community here feels about it.

I don’t like the concept. I have no empirical data to qualify that. In my mind those batteries are little rocket engines waiting to go off. There is one shit ton of power in those little things. I don’t know how robust charging circuits are in mods but I feel safer using a unit that is specifically designed for the task and nothing else. Are any of those feelings real? I don’t really know. I’m sure they could put a crap circuit in a fancy looking case on a charger as well. Maybe some mods have a great charging system. I carry a charger in my to go vape bag.

I feel safer w/ single battery and parallel devices, not trusting the balance charging in series ones. I look at it as an emergency kinda thing and keep in mind the usb will be damaged over time and have seen one pull completely off the board of a Pico, now she aint there for upgrades if u desire.

The way it was explained to me is, the pass through is only for emergencies. The heat of charging going through the chip, especially if you’re charging and vaping, is going to shorten the life of the mod. Do you have an older, kinda shitty mod you don’t care too much about? You can take that one for charging while you vape with the one you’re using.

That is a great idea. Clever.

Not a big fan of charging in the mod. Don’t get me wrong, I have done it in emergencies luckley with no issues. I should point out that I’ll only ever charge in the mod if it uses a DNA board. Not sure that helps.

Personally I would just pick up a two bay charger and away you go. I don’t trust mods to do the right thing.

I am not sure why people (reviewers) say “don’t charge in the mod”. where did that even come from?

My reason of thinking is that they dont put all the tech in a mod for charging that they do w/ an external charger. Monitoring it not to overcharge, topping it off slowly, etc. I have heard that the dnas do a better job at it tho. Even still for someone that did, i would still suggest swapping the arrangement of the batteries so they wear evenly.

Personally, I would feel more comfortable charging in a DNA mod where the chip is probably configured for balanced charge than I will with most cheap Chinese chargers, but that is just me.

a decent 2 batteries charger is cheap, and small enough to put in your bag, I think. If I have to charge my batteries through my mod, I will only do it if it have a DNA or maybe a YiHi chip.

I think a lot of manufactures also say it, at least the ones with some responsibility to their customers do.
Some will just want to sell their shit and will say how marvellous it is that you can charge it but they will also claim incredible TC performance where it is definitely lacking.

According to what I have heard the DNA boards actually have a very good charging circuit and does excellent balanced charging, whereas it varies much more on other mods. There is however also another problem, and that is that the USB port is a weak point on a mod, if you charge daily through the USB it is only a matter of time before it will fail.

For a short term solution I wouldn’t have any problems charging through the USB, I will however recommend that you don’t vape while charging even if the mod supports it, as the batteries can get very hot this way.

I did not know that DNA boards did that good of a job, good info. My gut instinct was that you get what you pay for, and that was in reference to a stand along, quality battery charger, BUT, whos’ not to say that good (probably higher priced), well built mods, can’t do the same. I wonder if mooch has ever done a comparison like that ? r/electronic_cigarette - Mod USB charge testing - the how, why and a little...

r/electronic_cigarette - Charging in mod vs. on charger?

Charging replaceable batteries in the mod

I frequently hear that charging replaceable batteries while still in the mod is a no no, but I'm curious to know why. I mean, how is it any different...

Just bought a VOOPOO DRAG. Loving it so far. It might sound stupid but I hate external battery chargers. They're inconvenient. What are your thoughts...

Charging your batteries - USB or external battery charger, which is safer? - The...

If your device takes 18650 batteries, it's more efficient to charge them with an Efest or Nitecore battery charger than in your vape mod.

If you choose to charge in your mod beware the power source. Charging from a laptop USB works but it’s painfully slow (overnight?) I have charged my DNA devices OK multiple times with the small Apple (iPhone iPod?) AC->USB Adapter block while traveling, but I fried a mod charging using my Droid Turbo charger phone AC->USB Adapter. Charges my phone super fast so obviously too much voltage.

Having a DNA device as my main weapon of choice I quite often have it plugged into my PC for extended periods. Because I love fiddle-fucking with the Escribe and Theme Designer software the device needs to be plugged in to validate the settings and such. And it cops a charge in the process, usually between 0.5 - 1.0 amps.

Honestly I’ve seen no adverse effects from USB charging and I’ve done this with all my DNA’s over the last few years. But I don’t disagree with anything already said here either.

Too much voltage would fry your phone actually so it’s too much current that was being pulled by the mod. I use the apple ipad charger (1.5A) for emergency recharge at work, and it works flawlessly.

The thing to mind with chargers that can output a lot of current is that the current is not being pushed into the device, but the device pulls the current from the charger. Good devices can regulate the amount of current they pull. Bad (or less good) devices will pull too much current, overload the capacitors, and burn out.

Too high voltage in a USB charger would be bad for anything connected to that charger since the USB standard is 5V, with maximum of 5A for battery charging (3A on USB-C)

I have stopped charging using my mod and carry around my charger. Reason being daily abuse of the charging port. 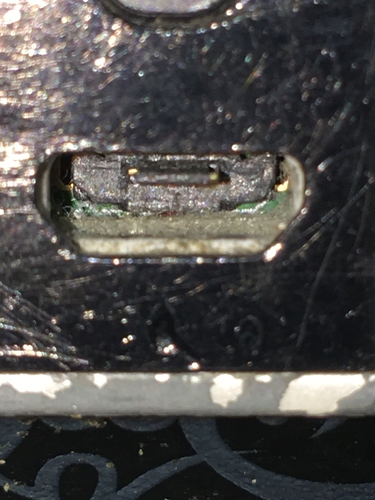