I hadn’t done any burn tests with my xCube until today, and I thought this might tie in well with the discussion of wire.

The argument I’m making when it comes to wire safety is that Nickel and Titanium are only safe to use with temperature controlled devices. Below I will try to demonstrate why I feel this way. But first let’s discuss this. We need to establish “normal” operating temperature. Most TC mod manufacturers are making mods that will go from 200F - 600F. I’ve heard of some that will go higher. Well 200F is useless, you can’t even get the slightest wisp of vapor from it at that temp. Conversely, 600F is for me a little too hot. In fact I’m finding the “range” for me is 400 - 520. I don’t typically go higher but sometimes maybe a bit lower. So how effective is temperature control in those ranges?

I ran tests on Nickel and Titanium on two different RDA decks. The Ti build was fine. The Ni one seemed problematic as the ohms were jumping around a bit. I ran some cotton through and added juice, did a couple of burns with it hence the discoloration of the Ni coil before dry burn test.

Titanium - 22ga. I used dry cotton. Did not pulse, I held the fire button until it timed out. Cotton pulled to the right after each dry fire. First sign of cotton getting singed was at 500F. 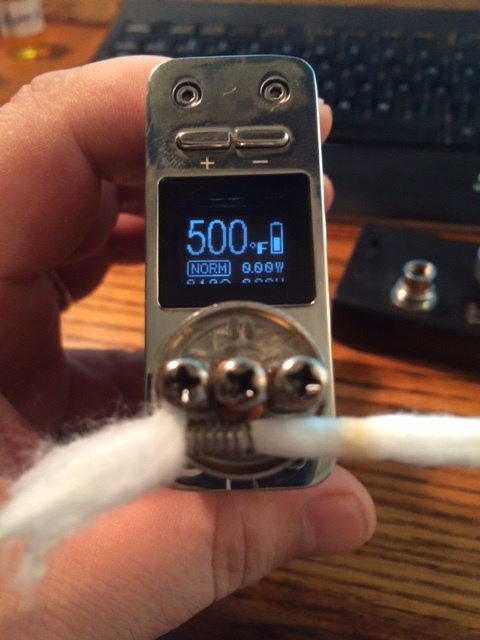 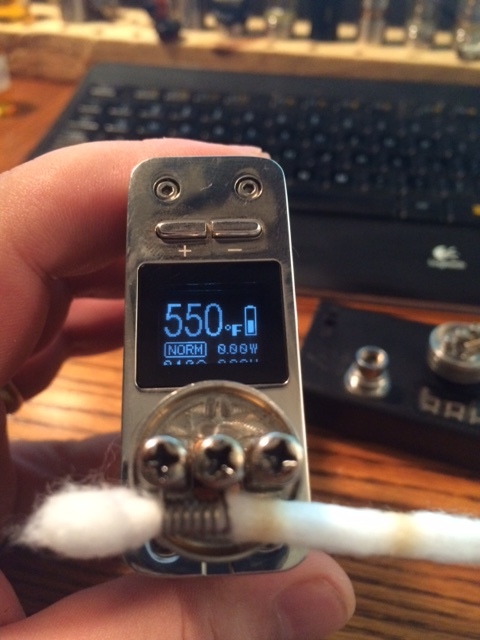 At 600 it burned practically through it. 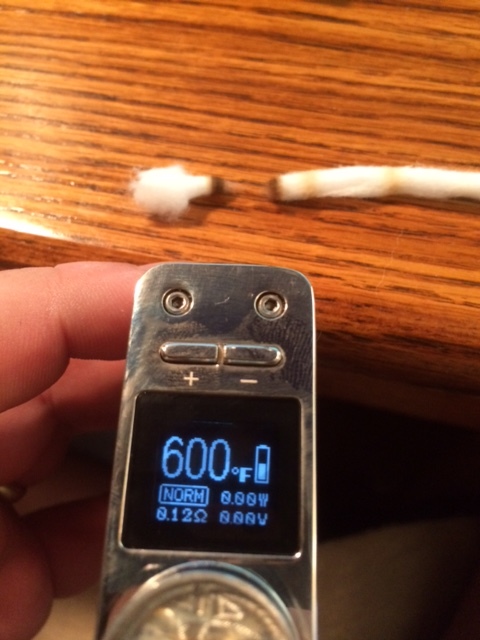 I don’t know what the temperature is where cotton will scorch. However, it reasons that it will not scorch under TC mode with the xCube II using Ti under normal vaping temperatures. Of course this also means that even at 600F where my cotton was nearly burned in two that it still wouldn’t scorch because we’re vaping wet cotton aren’t we? Still, one of the advantages of TC is that if your wick runs dry then nothing burns. A visual inspection of the coil after the dry burns does not reveal any discolored wire or any of that dreaded whitish chalky substance. I feel as a vape wire with TC that Ti passes the test for me. How about using under wattage mode?

I started at the lowest watts and again held the full 10 seconds until timing out. I then went to 10 watts and repeated with 5 watt increments. I finally got some glowing at 25 watts and subsequent discoloration of the wire. 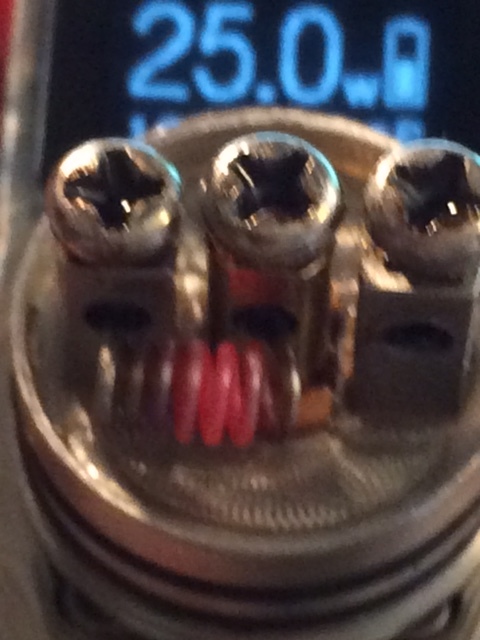 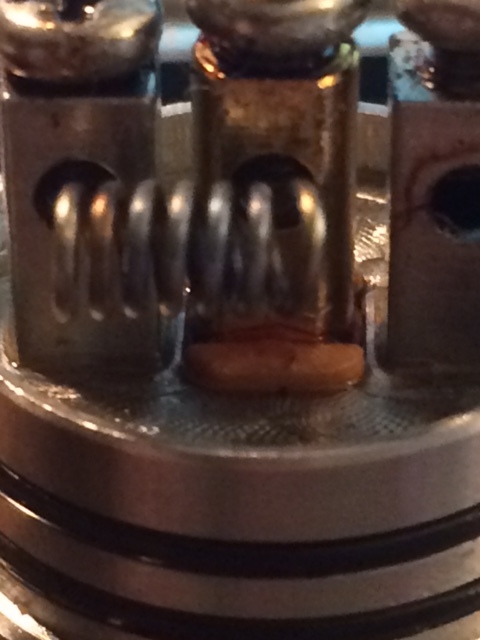 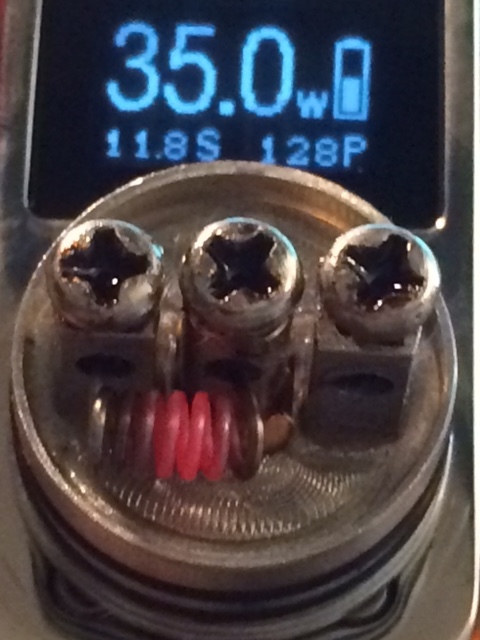 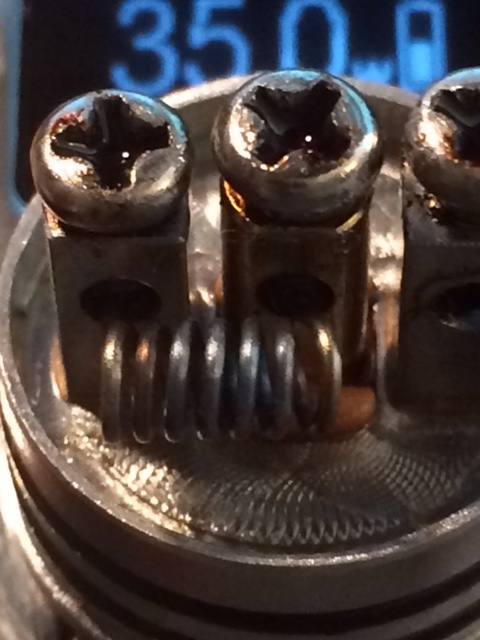 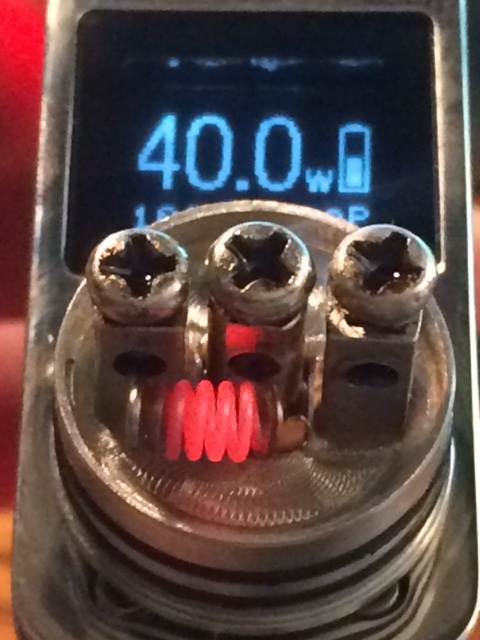 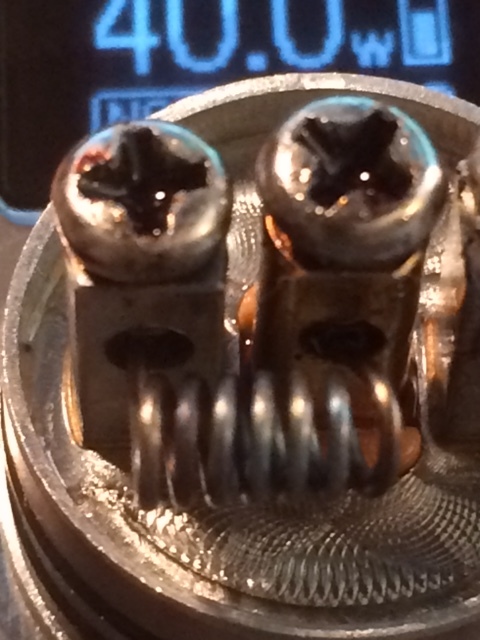 I don’t have a way to test the area where the overheating occcurred, nor was I even interested in touching it so I don’t know what the surface is like. The point is that below those temperatures where Ti starts to glow there appears to be no substantial impact to the wire from being heated under TC conditions.

The same tests with Nickel. These were done on a coil made from 26ga Ni200. 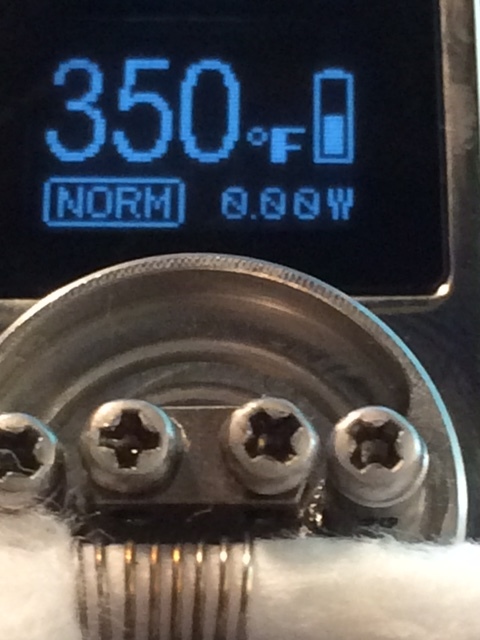 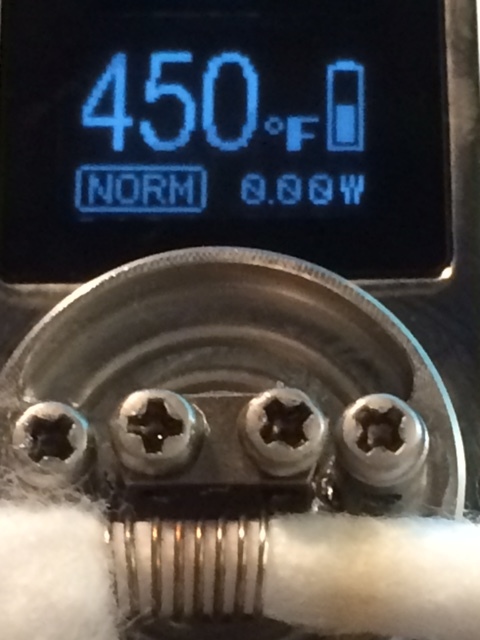 At 500 it was basically burnt. So I stopped there. I concluded that the xCube was not function on Ni nearly as well under TC as it does with Ti. This should not be viewed as a test between the value of either Ti or Ni as a TC wire though. All this result tells me is the mod thinks that Ni is cooler than Ti so it’s allowing more power to flow at the same temp setting where Ti is not scorching.

The dry burn in watt mode with Ni - 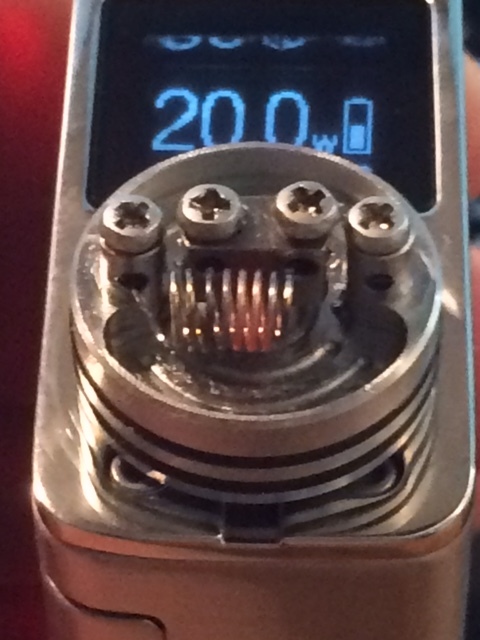 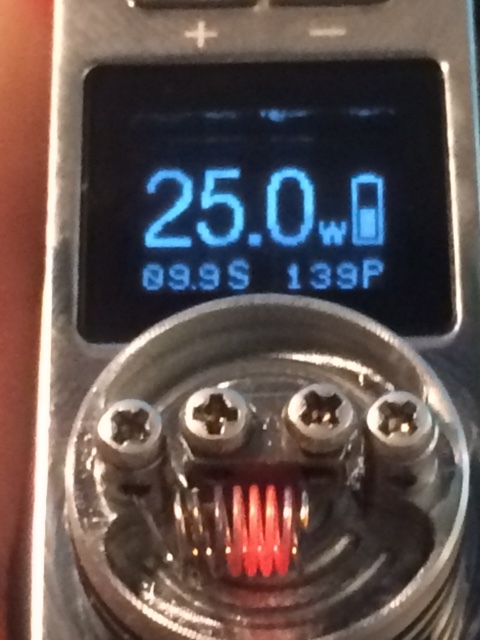 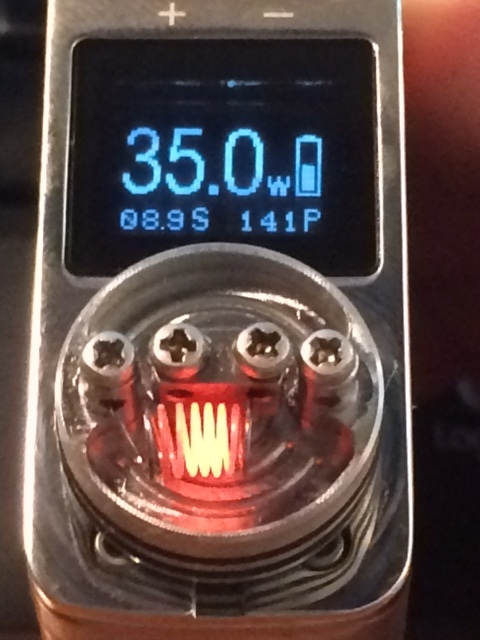 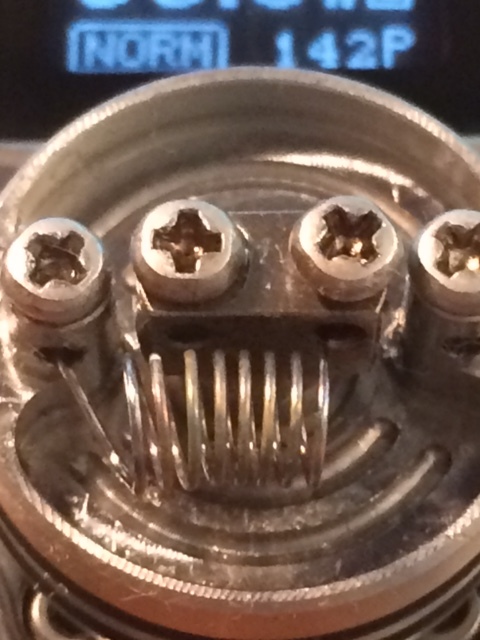 As you can see, nearly the entire coil has changed to an almost gray/tan like tone. However it did retain most of its reflective luster and feeling the coil it does not appear to have any residue at all. I also straightened out the coil and wiped with an alcohol prep pad. Nothing visible came off on the pad nor did the wire look any different after the wipe down. Neither did it feel different. It was a malleable as when installed and did not have any brittle or degraded feel to it.
I would also like to add that at no time during either of these wattage tests did I detect any odors coming from the coils. Now this is not to say there were no fumes or other noticeable thing emitted; there very well could have been but I stayed at arm’s length the whole time for safety purposes.

Of course I cannot claim that these tests mean that vaping either of these wires is harmless or safe. My conclusions are this -

For the xCube II that I own the device does not control temperature with equal effectiveness on Ni and Ti.
It appears on this device that it is more effective on Ti
Wattage mode will cause overheating of the wire at lower watts relative to each other and to Kanthal.
Ti wire develops a visible residue after reaching temperatures high enough to cause the wire to glow
Ni does not appear to change other than in color when reaching temperatures high enough to cause it to glow.

All in all I feel very comfortable vaping in TC mode with Titanium wire. Aside from the benefits of taste and temperature control, it appears under normal vaping conditions to be a very stable resistance wire. I do not feel comfortable with vaping with Nickel on my xCube. I feel I need to repeat these test on another mod and will do so and report back here.

Excellent @SthrnMixer I am so very glad you did this little test. I’ll admit I will still stay away from nickel (still don’t like the taste reaction with juice). I love that you have confirmed my feelings with Titanium. No visible residue in TC, Wonderful !!! I appreciate your efforts and look forward to you doing your thing with SS wire…

Curious if you think the wire gauge had any effect. Your Ti was substantially larger than the Ni and my first argument (were I debating you, which I am not) is that wire of the same average (eg bulk/assumed throughout) temperature being dispersed over a wider area might be a factor in your results.

That said, you didn’t mention the coefficients you are using, the coil resistances, or if you have done any direct measurements of the coil temperature to make sure “500F” really is 500F for both wires.

Hey, anyone can throw stones. I have the same mod but no nickel with which to test. If this (IMO mis-focus on wire-as-(potential)demon) continues I will buy some and measure coil temperatures using multiple independent techniques. . .but I am travelling abroad just this minute.

You know over the last 48 hrs I’ve thought a lot about it. I wish I hadn’t done any kind of testing at all. I’m not unintelligent by any means, but I’m also no scientist. The reason I did anything even resembling a test was to have some form of visual evidence of where many people’s concerns are. Aside from what you mentioned (which I have no way or knowledge of testing actual coil temperature…probably some infrared thingy needed huh?) here are particulars I feel should be part of a test such as the one I was attempting -

Rather than do any of these things, I again repeated my “test” until I knew without a doubt that the (is it Titanium Oxide, or Dioxide?) formed. For what it’s worth, 95 watts was the last dry fire I could do without this occurring. What I thought was happening yesterday was merely my bad eyesight and discoloration which I assumed was the substance. There is no mistaking it when it forms though -

Still only discolored at 95 watts 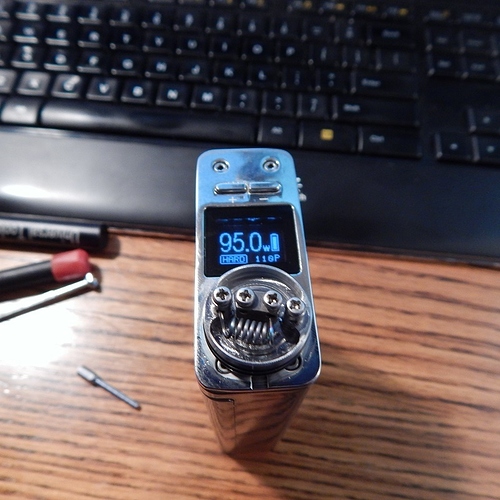 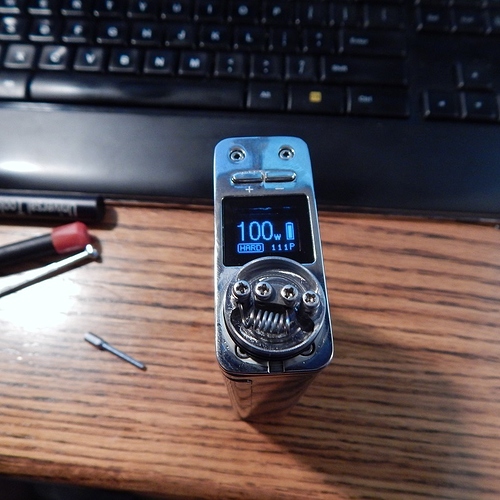 At 120 watts - totally covers the width of the coil 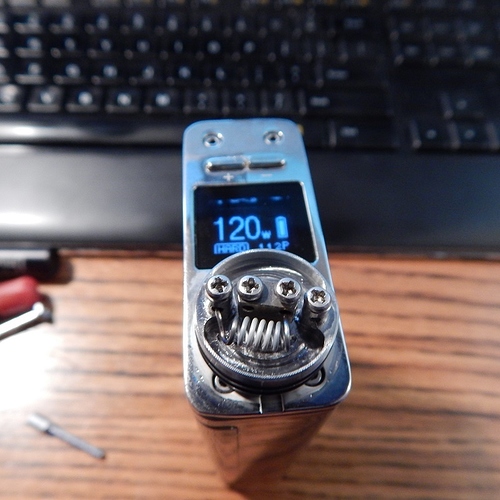 I share this only to reveal how I was mistaking what I saw yesterday for what people are actually warning against. As @Pro_Vapes said if were to get the coil hot enough the burning wick would cause you to stop long before the coil could glow - which I’ve discovered it will do across a fairly wide range of temperatures before it begins to turn white. How does this help anyone…hell I don’t know. At this point I just wish I had kept it to myself because now I feel like an idiot.

You know over the last 48 hrs I’ve thought a lot about it. I wish I hadn’t done any kind of testing at all. I’m not unintelligent by any means, but I’m also no scientist.

I hate for you to feel you wasted your time because I feel you did not. We all wanted to know what you would see on that coil. I probably would have done it myself had I had some RDAs laying around. All I have are RTAs. You satisfied a curiosity both for yourself, and for others. Don’t knock your willingness to help out…

Yo dude, lots of first experiments seem a little wacky after the fact. It’s called the hindsight bias. In no way did you waste your time. You gave us a launching pad for all kinds of experiments.

I experiment for a living. What you did had value and you should not be discouraged. I typed out a much longer reply, but lucky for all I lost it cuz I can ramble. But in short, I applaud the effort. It takes balls to be the first to try something. . .as a group we should now refine and iterate. Thank you.

oh, and your second iteration already proves my point. You are now a scientist and have demonstrated truth in pictures not so talking head no proof or citations YouTube video. Fist bump brotha.

I, for one, appreciate the effort. I think we all have the same concerns that you set out to address and I think you did an admirable job. Thank you.

You all are too kind. Thank you for the encouragement!