Tips to help you identify a fake smok tfv8

A friend of mine just dropped into my house with a smok tfv8 and three sets of coils he bought off ebay. He was having trouble opening the top hatch to fill up his newly aquired cloud beast.

I looked at it for a bit and we eventually got it open with a micro micro (smallest one i could find) screw driver anyhow I thought this was a bit strange as it didnt appear to have the same build quality as my tfv8. On closer inspection of the packaging I came to the conclusion it was a fake here are some of the things that led me to that conclusion. 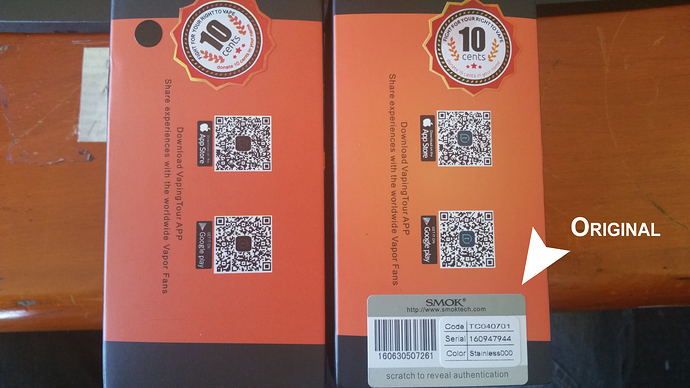 Note the lack of the security sticker the orange on the box is a slightly darker shade and the fonts are just a bit off the center of the q-code is almost black on the fake while it is green on the original.

The three boxes of coils he got are also fakes 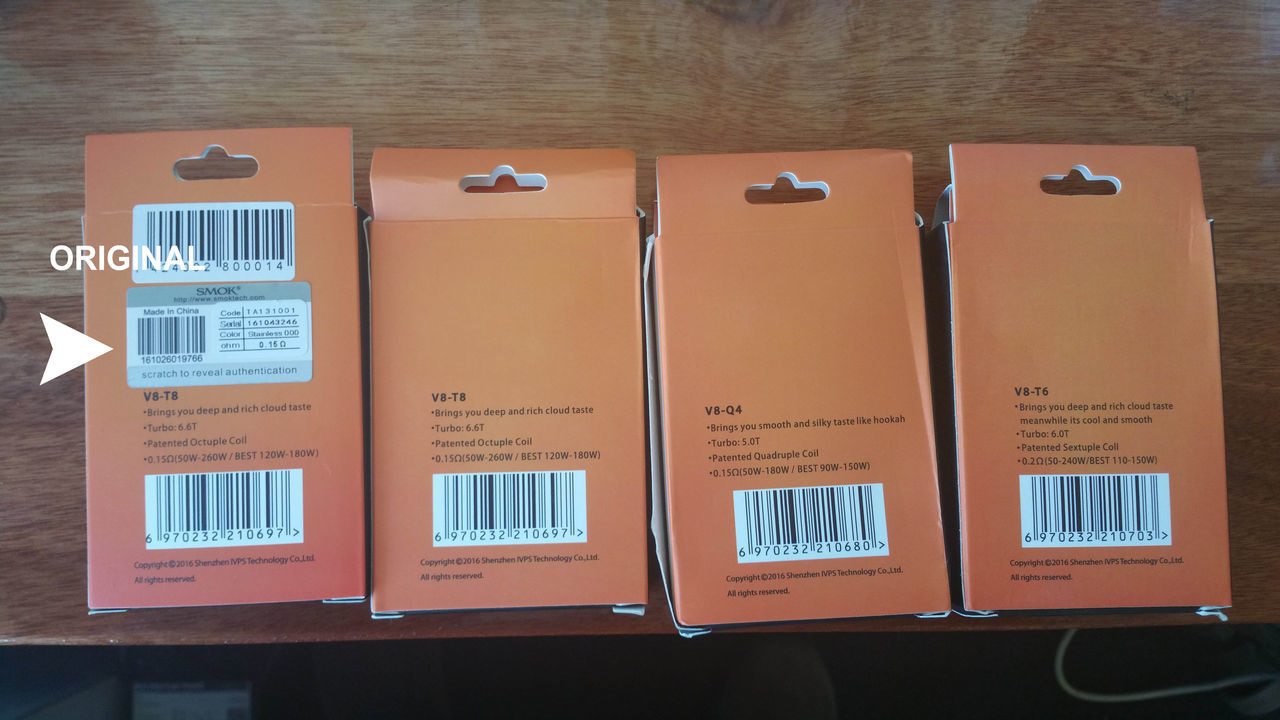 Lack of the security sticker and again slightly different fonts and the orange on the fakes is not a gradient as it is on the originals.

He also bought an eleaf ijust 2 kit which did have the security sticker and when entered into the eleaf website the product number came back as fake.

The price didn’t ring any alarm bells when he bought these and the seller had a good rep. It may be possible that the seller was also duped although I am leaning towards he knowing sold fakes due to the fact that when he was contacted through ebay my friend was refuned within an hour (although this was not proof of anything he may well be honest).

I think this could have been avoided had he had bough off a seller that is well known and has a good rep - I have pointed him at a few so hopefully it wont happen to him again.

I am posting this so others don’t fall into the same trap and if they do they can at least look at the images here and id that they have been scammed.

If there was not a market for fakes they wouldn’t be made (and the price of the authentic item may drop lol ok that won’t happen) so my advice is to look carefully at where and who you are buying off.

Here is a pic of the actual unit. The black is the fake (it has an original RBA-16 deck in which is why it looks a little diff in the coil area). 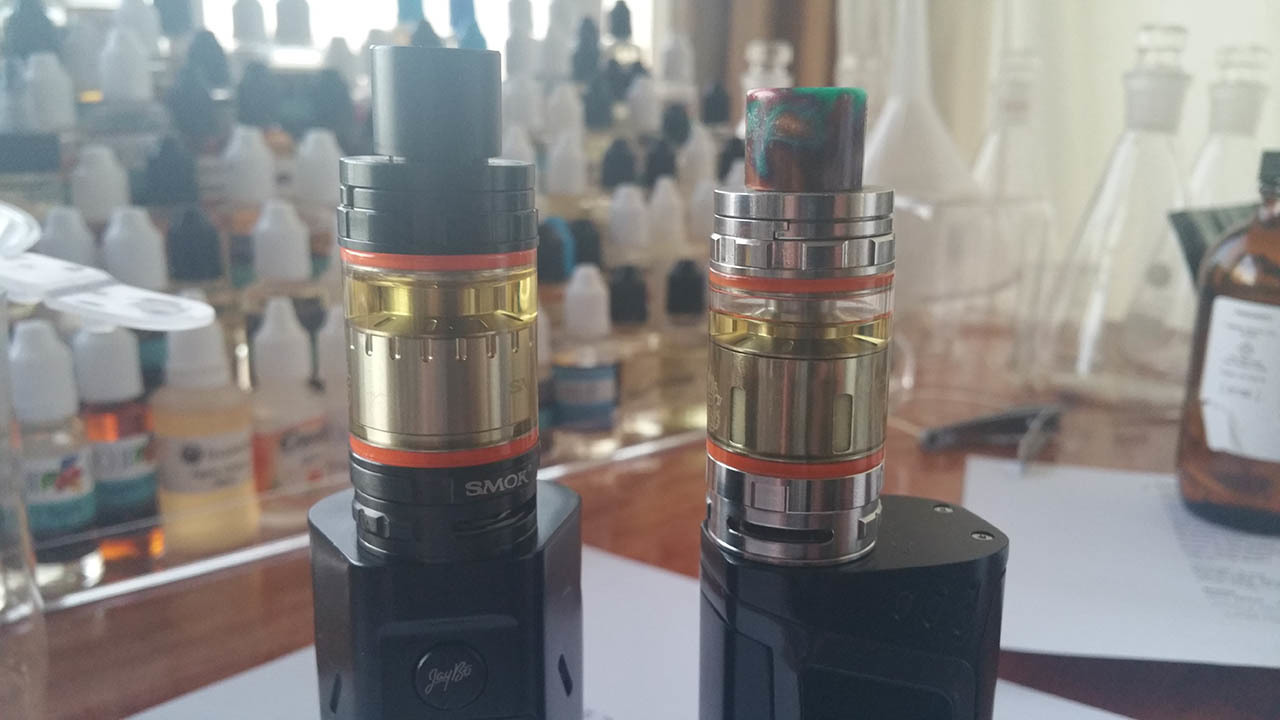 Cheers hope this helps someone out sometime

While I understand your notion that the seller might have been duped as well, given that there were three separate items which proved fakes, I’d say it would be OK to drop the name of the seller here, so that folks can at least know who to be wary of for a couple of months. If they are legit, one would think they would want to stop selling the fakes immediately, and would have to wait awhile for getting restocked.

Nice heads up though! Ty

I wonder if the item was advertised as clone, genuine, or what. he may be able to get his money back if it is advertised wrong.

I just heard back from my buddy and all of the items have been removed from ebay totally as in it is now not in the store that sold it not sure if it was voluntarily removed or ebay did it. They are based in china and only appear to sell into Australia. I was sent a couple of screen caps a few mins ago (he cant get to the full item anymore)

He did get a refund already for the tfv8 but not for the coils or the eleaf (see what happens there).

The coils should get a refund because they are advertised as authentic. ebay i think will do it if the seller does not.

Ya I agree - will wait and see what happens.

Back in the days of yore with the Kanger pen batteries and and the original aspire tanks (and everything was REALLY expensive) about 75% of the stuff on ebay was fake stuff. You gotta be careful.

I had one seller that was selling knock off coils and he was a huge seller that had been doing it for a long time. He knew I wasn’t kidding about getting him in trouble over it so he actually called me, double refunded my money and told me how I could make a lot of money doing it myself

Most people don’t know the difference and there is A LOT of knock off stuff out there.

Happy news my mate got a full refund for all the items. I was kinda satisfying smashing the fakes with a hammer i didnt trust they wouldnt explode in his face so we smashed em.

I have since hooked him up with all the same stuff but all genuine. He is now a happy camper and it makes me feel better that his hand and face won’t become a crispy black mess down the track also has the added bonus of removing a few fake items from circulation.