From what I have seen around, a lot of tobacco recipes use a mere 2.5 to 5 percent of flavor. I have Desert ship and cowboy blend, looking to make one, the other, or mix the two but I have no idea where to start with tobacco flavors. I chose these two as I read they taste like American Spirits (used to smoke, kinda missing the flavor).

Any help would be appreciated!

If you go to the flavourlist at the recipe section you can type in any flavour you want info about and see how much the average mixing and standalone percentage is for that flavour.
http://e-liquid-recipes.com/flavors
It all depends on which brand you are using. Inawera and FA are usually very concentrated and don’t need much, but there are exceptions, all depending on what flavour you’re using. I do not have cowboy blend so I don’t know about that one but I wouldn’t recommend using the desert ship at 5%, it is a strong flavour. I suggest you start low and work your way up according to taste, you can always add more if it is too weak. Don’t forget tobacco’s need a good steep before they get vapeable. Give it at least 3 weeks and some need more.

That’s funny you posted this question, I have been wanting to ask the community this very thing.

I’ll tell you now, it’s very hard to find a concentrate (or combination of concentrates) which provides the same flavor as the tobacco you used to smoke. I went down the same road for quite a while.

About the only way to achieve the same flavor of an American Spirit cigarette will be to produce a NET (naturally extracted tobacco) version from scratch. Check out the NET threads if your interested.

I don’t mean to be a Debbie Downer, but FA Desert Ship and/or Cowboy won’t really get you there. They are quality tobaccos, don’t get me wrong; the flavor profiles are just not the same as American Spirit. The FA Desert Ship is much too gingery/spicy. The FA Cowboy could be used at a low percentage as a mixer with another tobacco if you like the flavor, but by itself, not so much.

If you can make your flavor stash public, we can see what else with which you have to work; that way we don’t have to ask you a bazillion questions about what’cha got for mixers.

I just got my other flavors in let me populate my list then I will make it public.

I didn’t want to say this or discourage you… I have had a kind of a hell with tobacco flavor. I’ve never been able to get it right. The key may be in using micro percentages (like you have to do with the coffee flavors) so it stays sweet and mild with just a “hint” of it in there but again - I have never been able to get it to my satisfaction so it fits me and taste good.

Didn’t you used to smoke American Spirits? Or am I thinking of another forum member?

So, first off, have you made single flavor test batch mixes with the tobaccos in your stash? You don’t have to go big…a 3ml test batch is typically enough for you to understand and/or figure out the flavor profile of the tobacco. With FA tobaccos, typically, somewhere around 3% is a good starting percentage; true flavor requires a couple of weeks worth of steep time. 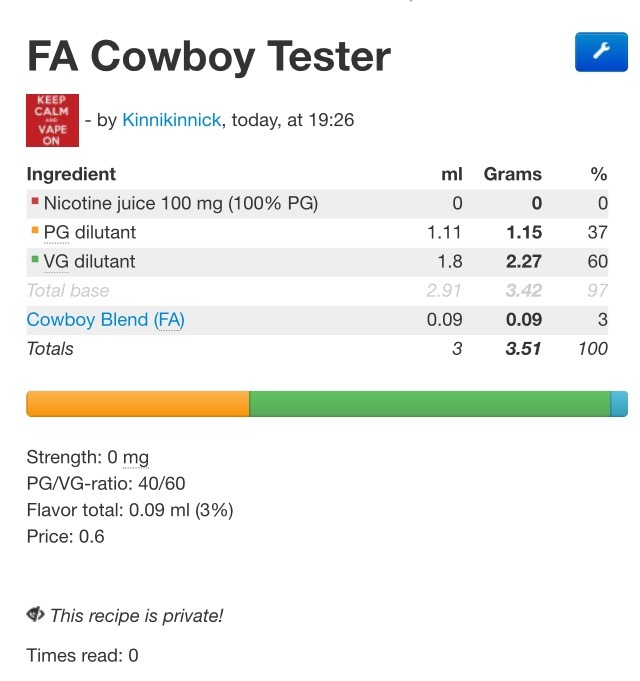 Yes, that would be me, but I haven’t found a tobacco flavour that tastes like it. Even making a N.E.T gave me a different result. It is a lot sweeter due to the VG I suppose. I don’t mind though, I enjoy my tobacco vapes. If I wanted something that tasted exactly the same I would light one up

I enjoy my tobacco vapes.

That’s where I fell as well. The NET of my Peter Stokkebye London Export was tasty, but without the combustion part of the tobacco, it’s not the same; INW Dirty Neutral Base helped a bit, but still, not the same thing!

So, I just enjoy the myriad of other tobacco flavors which are out there in liquid form.