Is this like asking for a miracle? Here’s what I’ve bought in the last three months. Smok Baby Beast Brother M2-Q2 coils less leaky of the others but coils burnt out in three days (yes I primed, yes I bought from three different places to make sure it wasn’t bad coils). Captain iJoy subohm S leaked like Niagra falls. Freemax Fireluke … three days in starting to leak already … oh and the Tobeco Supertank LEAKS! I’m so seriously ill with all these tanks and not one that works with a crap. I have my mesh RDA which thankfully works but I need a dang tank too!

Not sure what’s up with the tfv12 family . They all seem to leak when being used. 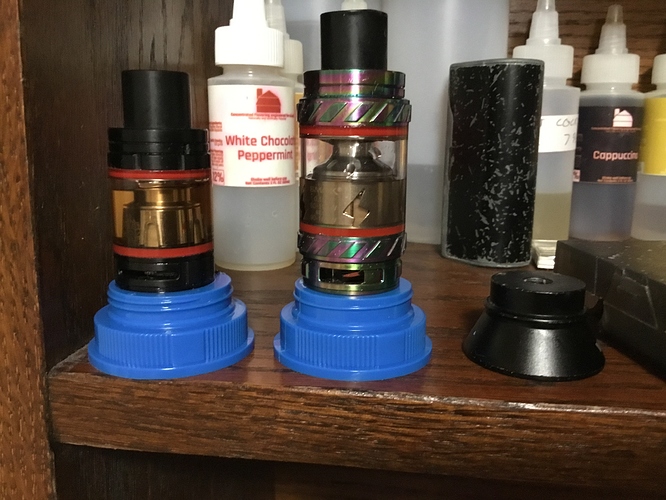 My tfv8 and tfv4 don’t leak when in use.

Wife has been using tfv8 baby beast and that thing’s AFC is dryer than a desert. I haven’t seen that leak once. knock on wood

For all it’s other semi-faults, the Vaptio Frogman doesn’t leak around the AFC.

I put in a vote for the Flow. In case you haven’t read any of my other posts about it, I’m pretty much in love with it. It uses the same style of coil as the Baby Beast, but I much prefer the Flow coils. They last longer and the Baby Beast coils do have a little seepage from the AFC every once in awhile. The Flow coils it came with never did that. I have a pack of authentic Flow coils as well as a pack of “compatible” coils from eLeaf coming. We’ll see.

uwell valyrian seems to not leak , but its a beast of a tank and coils are expensive on top of that it is for high wattage vaping 100watts plus of course you can go below that but the best flavor from it comes at 90watts minimum

@authormichellehughes I have several Big Baby Beast tanks and a Prince from Smok. The only time I have had any issue with them leaking is if the o-rings were not seated correctly when I put it back together. Also, make sure the coil is not cross-threaded when you install it. I use the Q2 coils as well, both the .4 and .6. I have yet to burn a coil out or have leaks. I am running rather low wattage though (22W to 35W with the .6 and 30W to 40W with the .4), not sure if that might make a difference in coil life. I have actually seen more leakage from my Crown 3 than any of the Smok tanks. You may want to take them apart and make sure all of the o-rings are seated correctly and there are no imperfections in the material. If they are, it is possible that you just got a bad tank or bad coils, as I have seen others complain about the same thing. Good luck in fixing them or finding a good replacement.

With my Smok the thing was the coils. the tank was the best out of the four if only the coils hadn’t burnt out so quickly.

ya my max is 70watts

A friend of mine was using the Big Baby Beast and he was going through a coil every day. So its not just you.He did the same thing, tried all the different coils and bought them from different places. He ended up buying the Valyrian. He isn’t crazy about the high wattage either but the coils last a long time and he really likes it so far.

If you get in the mood to build, the RTA deck for the Fireluke is one of my favorites. Really good flavor and easy to work on. Good luck in your search.

i don’t have experience for real with tanks that use manufactured atomizers anymore…from the products you mentioned i only use Smok TVF8 (but with the RBA, the manufactured atomizers just don’t bring flavor for me on this thing, sorry people, just personal opinion… the rba works wonders) i found my last years of vaping getting more satisfaction with RDA/RBA/RDTA/RTA tanks in general… in this case imho if you know how to wick them, there’s is no leaking unless something goes really bad with the tank itself. in the case of manufactured coils one tip i could give is to completely close the aiflow (or juice control) when you’re filling them up and after that open them again and this usually works for most people

but let me explain you something please…
top fill doesn’t mean that they don’t leak… for real. the biggest role in these tanks is mostly on atomizer! ofcourse they can’t leak because there are no holes to let the ejuice escape from bottom BUT they can spit back the liquid (for example Cubis 0,5ohm atomizer is a known and good example for this),
another thing is if you can get satisfaction from it… top fill means usually top airflow and i am not a fan of it! yes i know that probably a tank like Nautilus 2 is a top filling tank, but since it has bottom airflow means that it could sometime possibly leak…but in general the typical “top filling” tank concept has NO bottom airflow (see for example OBS, Nautilus X, Cubis pro etc etc)

since you’re able building coils yourself (since you mentioned the RDA) i would suggest you buying an RTA of your likings… the capacities are 2ml up to ???ml… after learning to wicking them properly there are hardly any leaks or whatever

i hope i helped you

At the suggestion of @VapeyMama I tried the Blitz Warcraft and other than it being a bit small 3ml it just doesn’t leak on me.

vote for the Flow

Bought one today on your recommendation

ETA I use the X4 coils

iJoy RDTA 5S won here in a giveaway several Months ago …still using original Claptons that came with. All other tanks parked. One Con is central fill hole requiring glass eyedropper or Chubby Gorilla with long tip. Never leaked and since I use CG 30ml on the daily (and 30ml glass) the fill thingy isn’t either