TRPR (TPD) Implementation: As of 20th May 2017 the full regulations of the TRPR (TPD) have been implemented.

The regulations mean major changes for the European vaping industry as a whole.

Vape store can no longer offer eLiquids containing nicotine in bottles larger than 10ml, however, they can offer multipacks of 10ml bottles.

All nicotine containing eLiquids have to go through product testing and notification. All eLiquids containing nicotine on thier site have met these

Tanks and kits containing installed coils, such as subohm tanks, also require product testings and notification. They can also currently have a

maximum of 2ml liquid capacity in their sold as state.

Vape store can no longer offer eLiquids containing nicotine in bottles larger than 10ml, however, they can offer multipacks of 10ml bottles.

They can also currently have a maximum of 2ml liquid capacity in their sold as state.

These two rules were already implemented in the Netherlands in februari 2015, didn’t stop me from getting my shit elsewhere

The TPD is not in UK law as the TPD, for what I have seen it’s been adjusted and brought in under the TRPR, Tobacco and Related Products Regulations.

It is basically the same except for a few small changes.

Some places in the EU (Germany) will still sell tanks bigger than 2ml as most tanks are not single use or classed as disposable. - in disposable electronic cigarettes or in single use cartridges

I know, I’m just saying there are ways around it.

Affirmation of the universal Politicians and Bureaucrats credo: We don’t know what the fuck we are doing, but we WILL stick our head up YOUR ass.

How complicated can one law be against something that almost certainly saves lives.
#ROBBED

This is very sad

All my local vape shop is doings is selling you it in a two part mix it yourself 30m 100ml kit.
And they probably make there own nicotine shots and get it wholesale.
Crooks sticking it to tax payer again.
If there that desperate for cash they have chosen to hit vapers trying to save a little cash.
Wouldn’t surprise me if they legalised weed before long just to create more revenue from taxes.
Story boy become man gets a job pays taxes on his wages,needs clothes pays taxes on them,needs a phone to get in touch with friends and family pays taxes on that.gets his first phone bill got to pay tax on that.
Decided to go out for some hot food taxed on that.
Nice pint to wash it down taxes on that.
Needs a car for work tax on that.
Got to put fuel in (heavily taxed)
Buys a home taxed.
Family gets bigger more bedrooms more tax.
Decides to vape instead of smoking to save a little money TAXED,tax on tax on tax on tax on tax on tax on tax.
If they could bring a tax on tax they would.
Instead they raise income tax.
They say we’re better off than when Henry 8 was taxing commoners.
We still pay for the queen it’s just there are more of us and more taxes than politicians that the money goes a lot further

Tanks are banned or sale of?

In the UK you can not buy/sell a tank bigger than 2ml capacity.
I think in the future company’s will try to get around this by selling or including extension kits like the Ammit or Kylin tanks.

I posted that same thing about extensions last week

.
Not illegal to walk around with a bigger tank than two mil?
I onl ask cos this government will make all sorts of strange laws up at the drop of a hat.
And ignore important things like putting more money into catching real crooks

Btw anyone know which of the parties that are up for election soon are standing by vapers ??? 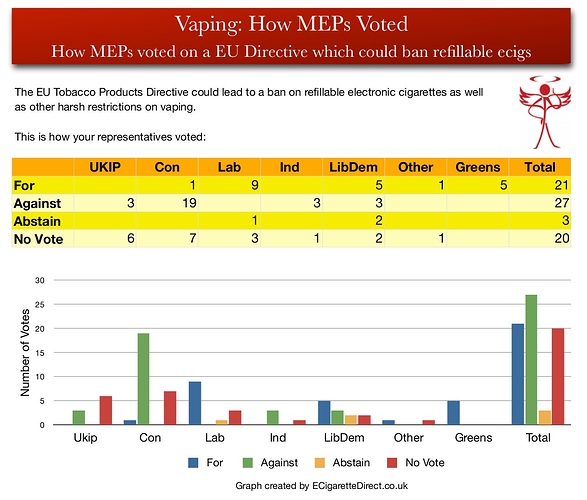 Just out of curiosity. What did your local government representatives tell you when you contacted them about the TPD/TRPR?. I’d be interested to know how they explained it to you, if they even bothered to address your concerns.

That’s why I asked the question @DrChud.
I don’t have enough daylight ours to fit a BBQ in never min visit a lying politician and talk to def ears.
Just wondered if anyone new what different parties polices were on vaping if elected.
As it’s down to the politicians we’re even discussing tpd/trpd or without the terminology ppl keep sticking down my throat.
Ordinary vapers been screwed over