Truiva (Stevia) - Anyone Tried Using it?

I bought a jar of Truvia which is a Stevia Leaf Extract. The ingredients are Erythritol, Stevia Leaf Extract, and Natural Flavors. I know @Mofogger has been using Pyure with success at making his fruit flavors better for him to vape.

But reading up on Stevia, I don’t think it’s a good sweetener to ingest as far as in food. It seems the ingredient Erythritol is a processed corn sugar extraction that uses all kinds of bad stuff to extract the natural sugars. It seems the whole FDA approval was based on pressure from Coca Cola and Pepsi, and most of the Stevia is from China. Most people think it comes from Peru. But the commercially available stuff we buy here from Truvia, and Pyure and other companies comes from China (along with everything else!).

So my thoughts? I plan to use it. I will probably make a liquid from the powder just like I do my Malic acid powder. Dissolve 1 gram in 10ml of PG, and see how this works as a sweetener. I doubt I will use it much anyway. But I have made some fruity recipes that I had wished were a little sweeter, even though I added some Marshmallow to the recipe. I don’t particularly care for Sucralose in my liquids. The reason I thought of this was a discussion with Mofogger, plus I have tried Capella’s Concord Grape with Stevia and it is pretty darned good.

So what do my peers think? I would love to hear any thoughts on this stuff.

I would not expect that erythritol is ideal for e-liquid. It’s in this mix to make the stevia product have more bulk and a more similar mouth-feel to table sugar, which isn’t really what we’re looking for in an e-liquid sweetener. I don’t know if it’ll cause any problems, but I don’t think it would bring much benefit to an e-liquid.

When I eventually try Stevia, I’m either going to use Pyure or a similar product (like Kal Pure Stevia Liquid Extract Unflavored or Now BetterStevia Glycerite) that doesn’t contain a bunch of bulkers.

So now you tell me lol. I am sitting here shaking a bottle of PG and Truvia I mixed up. I was looking for the Pyure, but they didn’t have it. I guess I will drive to Walmart tomorrow and grab some.

I just assumed the liquid stuff was the granular stuff dissolved in PG.

While I have my doubts, I don’t know that it won’t work. You can be our guinea pig!

As soon as I get these damn granules dissolved I will be squealing like one of those little retarded monsters.

Don’t do it! Delete this thread! It’s farkin NASTY!!!

I meant to reply to @daath

The coil sizzled. There is a very bitter, burnt taste. Instead of deleting this, add it to the Do Not do This Stupid Shit thread lol.

Sorry, I am going to go vape some horse shit to get this taste out of my mouth!

Haven’t tried Truvia but Pyure also uses Erythritol as a medium for stevia. I don’t really have any concerns to express on Erythritol but I’ve been considering making my own stevia blend with Rebaudioside powder suspended in PG just to eliminate extra unnecessary additives, based on suggestions from the community. For the moment, I’ve been extremely pleased with Pyure Stevia but the pursuit of a perfect sweetener is never over.

I’m including some excerpts as additional reading material from Pyure FAQ and Wikipedia - Erythritol page for anyone interested.

F.A.Q.
What goes into Pyure Stevia?
Stevia is a high intensity sweetener; more than 350 times sweeter than sugar…
Because we are in a single serve industry, to provide an easy to use product we needed to pair stevia with a bulking agent to add some substance.
We put a lot of time into finding the perfect partner for our stevia and have chosen to pair our Reb A extract with Agave Inulin, and Erythritol.
We do have plans to create a solo stevia product in the future.

What is Erythritol?
Erythritol is the only easily digestible polyol derived from corn, and is 70% the sweetness of sugar. Pyure was the first to introduce Organic Certified and NonGMO Verified Erythritol to the market.

Wikipedia - Erythritol
Erythritol ((2R,3S)-butane-1,2,3,4-tetraol) is a sugar alcohol (or polyol) that has been approved for use as a food additive in the United States[1] and throughout much of the world. It was discovered in 1848 by Scottish chemist John Stenhouse.[2] It occurs naturally in some fruit and fermented foods.[3] At the industrial level, it is produced from glucose by fermentation with a yeast, Moniliella pollinis.[1] Erythritol is 60–70% as sweet as sucrose (table sugar), yet it is almost noncaloric, does not affect blood sugar,[4] does not cause tooth decay,[5] and is partially absorbed by the body, excreted in urine and feces. Under U.S. Food and Drug Administration (FDA) labeling requirements, it has a caloric value of 0.2 kilocalories per gram (95% less than sugar and other carbohydrates), though nutritional labeling varies from country to country. Some countries, such as Japan and the United States, label it as zero-calorie, while the European Union currently labels it at 0 kcal/g.[6]

I just found these sites too for some more reading… 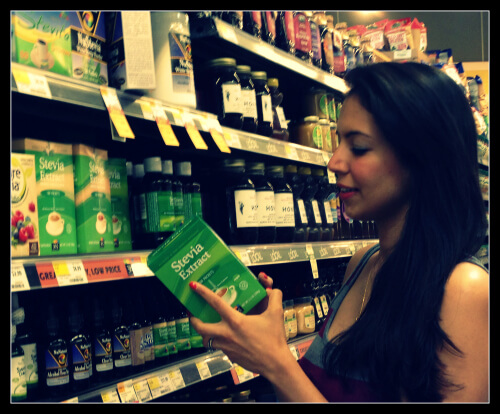 ...it's exciting to know there are alternative sweeteners made in nature, like "stevia," that don't wreak havoc on your health - or do they? That's what I went on a quest to find out. Here's what happened... AVOID! The Toxic Truth About Stevia

By Jane Barthelemy. Stevia is marketed as a healthy sweetener. But surprising new evidence indicates all stevia sold in grocery stores is highly processed with methyl alcohol or other toxic chemicals. Healthy Solution: Look for natural zero-sugar...

Food for thought, best part was at 9minz in, wasn’t expecting that…

Haven’t tried Truvia but Pyure also uses Erythritol as a medium for stevia.

You may be looking at something else, they do make several stevia blends. The ingredients for Pyure Liquid Stevia are: Water, Organic Stevia Leaf Extract (Reb A), Organic Apple Cider Vinegar, Citric Acid.

That’s the thing I was running into in the grocery store. Almost all of the products had some sort of binders or fillers, and I couldn’t find anything on the shelves that looked like it would work for me. Not because I thought they were dangerous, but because it would be hard to aerosolize enough of it into a vapor without burning.

Bottom line, the ingredients list is more important than the brand. The thing you are looking for is Reb A AKA Rebaudioside A 95% AKA pure stevia leaf extract. Anything else that we use in our liquids like water, PG, VG, alcohol, citric acid, apple cider vinegar, etc are OK, but if it’s something like erythritol or maltodextrin listed before the Reb A, that might be an issue.

Re: that video you posted, he could have been talking about chili peppers for the first minute, so that person lost my attention real quick. I did skip to the 9 minute mark, and frankly, I could source a tub of 100% natural organic arsenic, we could all have a scoop and go out Jim Jones style, a nice, natural death! The notion that organic equals healthy is well-intended, but sadly things aren’t that simple.

You may be looking at something else, they do make several stevia blends. The ingredients for Pyure Liquid Stevia are: Water, Organic Stevia Leaf Extract (Reb A), Organic Apple Cider Vinegar, Citric Acid.

You are correct Sir… The liquid Pyure I use doesn’t have Erythritol in it. I had forgotten that’s the reason I grabbed it instead of the other brands they had. I transfered the contents from the original bottle to a better squeezey bottle so I didn’t have an ingredients list to refer to but remember it now.

. I do recall now, standing in the aisle at Wally World with several bottles and comparing ingredients. Some of them had an extended list of additives and Pyure didn’t.

i have been mixing my e-liquid for 6 months. i use skinny girl liquid Stevia, i use it very sparingly, it comes in a squeeze bottle one small shot to 30ml mix. it has worked great for me, i guess that would compare to 4 or 5 drops to 30 ml
Gives my mix a pleasing sweet flavor. however to much is bitter, and will gunk up the coil, i get about two weeks
out of my coils using it, in my baby beast tank i fire mine at 45watts to get the best flavor blast. now i do clean my coils
in boiling water once a week, to prolong their life…