I emailed US Senator Bob Corker from Tennessee for the latest CASAA call to action and it doesn’t seem as if he’s gonna give us any support. It sounds as if the Big Tobacco Propaganda machine has already gotten to him. He quoted a couple of the standard antivape anti-facts and brushed my ass off. I’ll remember his sorry ass when it comes time to vote. Here his sad ass response. Excuse the Mr. and Mrs. part… I wanted him to think I had more votes. 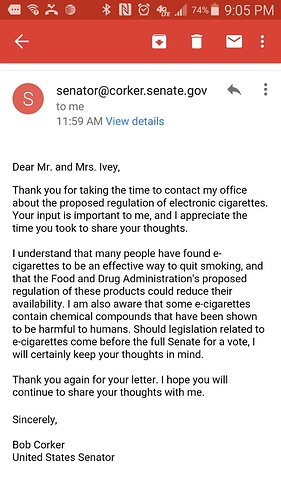 I will continue to email him weekly to share my thoughts with him. I will also attach some of the false info being fed to public about vaping.

We as a group should make a petition and testimonials so we can bombard their emails. Maybe in numbers we can be persuasive.

Almost word for word response that I received and I’m in CA. These people that work for us are all using a standard response (probably written for them by a secretary at RJ Reynolds or Philip Morris). Crap like this just brings me one step closer to voting for the “other guy”.

Ditto here in Alabama. Only my guy didn’t even mention anything about it other than to quote back to me the name of the bill that is up for ‘committee review’ (a $0.25/ml tax on e-liquids).

DAMN!!! Good thing you make your own.

I’ve been reading a lot about the blanket letter from Sen Corker. I’m here in Tn and just can’t wait to get mine. eyes rolling as I feign sarcasm. It’s all about the benjamins anyway. we could have freaking 20 yrs of data that it cures cancer and if it doesn’t make them more than the tax on a cigarette then they aren’t helping.

Curing cancer would make it even worse! Then Big Pharma would really get involved and not only would you not be able to get e-cigs, they’d arrest you for owning one. How dare you cure cancer and put others at risk of being cancer free! You’re hurting our pockets! Greedy idiots the lot of them.

Thats the truth! They are really worried about cancer rates going down due to people quitting smoking. Thats where the real money is, cancer drugs!!! I have seen countless reports on what is truly made on cancer drugs not only for big pharma but the doctors who administer, the most recent being on 60 min. I’m a news magazine junkie. I’m hoping VICE will do a story about vaping soon. They are the ones that took the basketball delegation to North Korea and the president to the prison. Love those guys…

Ditto here but I didn’t get anything saying he welcomes my feedback and concerns, just quites the bill…
I jate to be a Debbie downer but I believe the cold hard truth that there is nothing we can do outside of providing them with MORE money then they would be getting through taxation/BT/BP…
It’s so heartbreakingly disgusting

Yes it is, but we have to keep voicing our opinion by letting the “representatives” know how we want things to go and should go.

All the research is not in just yet, but pushing “harm reduction” through vaping is what we can do to further the cause of keeping vape products available for smokers to try.

Curing cancer would make it even worse! Then Big Pharma would really get involved and not only would you not be able to get e-cigs, they’d arrest you for owning one.

Big Pharma is already involved in a big way. We are giving people a alternative to their nicotine patches and gums, and their anti-depressants they call cigarette smoking deterrents. Not only that people with healthier lungs won’t be needing their inhalers and drugs to help them breath better. Nor will they need their high dollar drugs to combat lung cancer. Believe me, they are also a big part of this. Let’s face it, even the AMA is spouting out propaganda. It’s ALL ABOUT MONEY…

It’s ALL ABOUT MONEY.

So now is the time to make your money talk. I got an email today about money in politics in the US and they have started a great initiative, at least I think so. It is time to buy a stamp folks.
http://www.stampstampede.org/pages/money-in-politics

You know, that most likely is just another gimmick to make money but, I like it. In fact, I like it a lot. If it was n’t for the money floating around in politics (bribes, election funds, ect), Vapors wouldn’t be in this mess in the US. I can’t think of a better way to protest. I’m seriously thinking of get one !!!

most likely is just another gimmick to make money

It might be, but it will get attention. Everybody uses money and it changes hands rapidly. If people don’t want to spend 10 bucks on a stamp, we used to make stamps from potatoes when I was a kid. Make your own and stamp your bills.
I’m almost sorry I don’t live in the US, I would certainly get one, or make one.