(upload://mxnPCLrAog0lDGcrMpSN1lmwq2l.jpeg) I don’t have all the equipment but I do have a drill! With a metal pipe cleaner attached to the end! It works, all these recipes are for me anyway rn.N I don’t mind. But how long should I be mixing for is my quiestion?? 30sec 60 sec? How do you know?

We all have tried a bunch of things, the coffee frother was popular a long time ago. Unless you have a homogenizer your better off just mixing and shaking your mix for 60 seconds and putting it aside to steep.

Not really a good idea using a drill. It’s very un-wieldly and may be difficult to control . Unless you have it on a super slow setting the drill is going to introduce millions of microbubbles and turn it all milky. Using a milk frother will produce the same results. Why not just give it a good shake for a few minutes manually?

I never thought shaking it by hand was enough

@ladycrooks I love your ingeniousness but don’t forget the easy(ier).

@ladycrooks, I also use a drill. Spin it a good 30 seconds- and let steep. Now only if we had “something” decent besides pipe cleaners to work with.

Another thing to consider is the drill looks used. For sure it has some left over sawdust and what not in it, the last thing you want is that getting in your juice. I bought a brand new rotary tool for my game changer homogenizer even though I have 2 or 3 in my tool box for that very reason.

Yeah I hate shaking by hand, although I’ve not used the drill method myself, I’d have to agree with @D.Sims, 30 seconds should be enough, then at least an overnight steep for fruits (longer as needed)
I have arthritis so hand shaking is a pain. I Do have a homogenizer, but honestly haven’t used it yet.
I do use an old Tornado paint shaker though, that I made up some fixtures to hold bottles from 10ml up to 240ml. (It will hold up to a gallon, but I haven’t got to that point yet!) 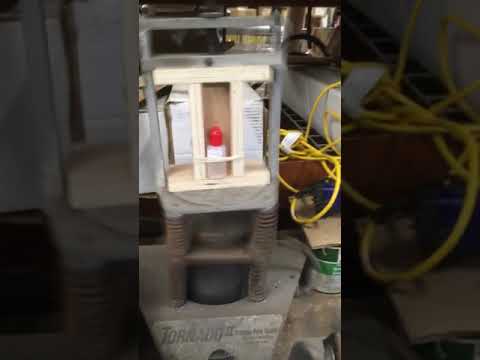 That’s great!! Lol! I love it,! N hey is that u or me? There’s no way you listen to D.J slink?
(huglife)This popped up after your video…

So a rotary drill/Dremel is ok to use? What do you recommend to use as an attachment?

@Rocky02852 - you have a clean room for your DIY? Yeah, definitely jealous. LOL

a rotary drill/Dremel is ok to use

Is it ok ?? Sure it Is, but its not gonna do anything for ya at least not from my experiances …It will introduce unnecessary oxygen in your mix …Ive used every type of speed steeping thing you can imagine …The only thing that has actually made a significant impact was a homogenizer…

I freakin love that video

I’ve seen paint shakers at local hardware stores and thought “how fn perfect…” not just spinning some rotating bit, they actually duplicate the motion of shaking by hand.

I’d bet there’s gotta be some kind of smaller, less commercial-priced device that some company produces that utilizes the motion but for a different application - for home use.

I can’t think offhand what home gadget would use that mechanism/movement, but you know it’s gotta be out there somewhere.

Might even be smaller paint mixes made for home use because the full sized commercial machines are - less than ideally priced for home use.

Ya I love Rocky set up bc he made it lol…Id actually rather shake by hand but what he did is awesome …As for rotating bits as ling as its a homogenizer ill use it knowing it will so4eed up the process , its an amazing tool and not just the Gamechanger but any homogenizer …I like the GC bc it was crested by one of our own and its a fraction of the cost for hand held devices

I’ve got two dremel and a cordless drill here, but honestly haven’t considered using them since I just don’t know whether they’reas any need to be mixing them THAT thoroughly.

I mean the actual mixing of liquid ingredients in a bottle together seems to be accomplished with simple shaking, and I dunno that a high speed rotary bit would really be doing it better past that initial point: easier than hand-shaking I guess, but even 30secs of shaking has always left me with a uniformly mixed liquid

And, well mixed is mixed.

Like stirring sugar in my coffee: once it’s dissolved, further stirring ain’t gunna make in any more dissolved.

If the drill bit also homogenized, I would be on it like white on rice but mixed is mixed.

If the drill bit also homogenized,

Agreed…I was skeptical at first , trust me i went round and round . I figured it was another hype item that happens too often in vaping . I had to get one because well i have to try everything lmao and after the initial testing I was sold . I dont use a USC to clear up the liquid faster , instill let it sit for a day or 3 but the next day a liquid that needs a week or two is ready …

@Guido_Possum yiu alwsys get me talking at my bed time lmao

Ya I love Rocky set up bc he made it lo

Well a proper paint mixer sloshes the shit round so well and you could easily attach a flat tray that could easily hold as many bottles as can fit: then you’ve only gotta find a way to secure them and you would definately have a better way of mixing - simply because you could leave 20 or 50 or however many bottles fit on that tray, and leave them to slosh as long as you like.

That certainly would be better than hand-shaking - automatic batch mixing.

They move like a mechanical bull, which would also mix brilliantly if you happened to have one um, just laying around: strap that bull with mixes and start her up - 'cause we all got a mechanical bull in the back shed doing nothing…

Actually, thanks to @deltrapp making me check what post he’s on about I just re-read this and the word “Agitation” came to mind, which make me think that another - much cheaper - device that could mix similarly, would be one them stupid little vibrating exercise blocks I’ve seen on TV etcetera - the ones that look like a set of bathroom scales but are meant to vibrate fat off fat people just by standing on them (god some of the horseshit people believe hey) - that made me further think that while they might not move the bottles around enough to replicate a paint mixer, there’s so many of those dumb exercise gimmicks around you could probably find a TV advertised vibrating exercise gadget that’s similar moves more - just strap the bottles to something like that set on ‘low’… and come back in an hour - they’d be like whipped cream though if you got the wrong kinda gadget.

Certainly, because they’re stupid gimmicks you could find them cheap in lots of places.

@Guido_Possum get me talking at my bed time lmao

Happenstance: too busy lately to be hovering 'round all day and this time of night (5:00PM - 6:00PM) I finally get a little window of time to sit and focus a bit before getting back up again for the nightly cook/eat/shower/bed routine

I get about an hour in the mornings too, but even just starting to reply, I’ll tap a few lines out then check the clock and the hour’s suddenly gone while I’ve not even started getting ready, so I avoid the reply button completely in the AM,