The Vandy Vape Triple II RTA is the second Triple Coil option from Vandy Vape, and designed by VapingwithTwisted419. What? If you noticed the name change, it is due to the recent crackdown by Youtube on rather informative and helpful channels. This collaboration has given way to a beastly rebuildable. The Triple II RTA was given to me by Vandy Vape for the purpose of this review. Let’s do this! 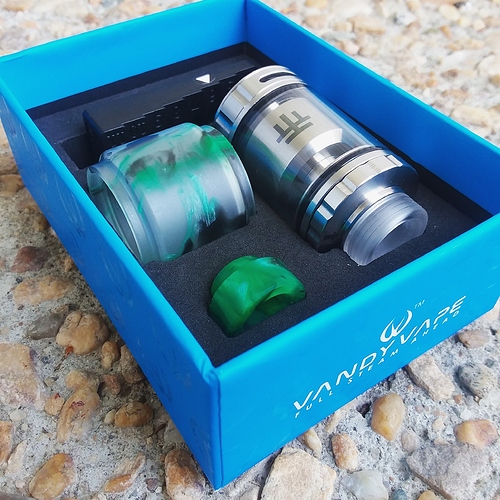 My kit actually came with a coil leg length Lead Guide, but I am not sure this will be available for the kit. It is shown alongside Vandy Vape’s Capstone RDA, so it may have been placed with my kit accidentally. If not, it’s a nifty little tool. 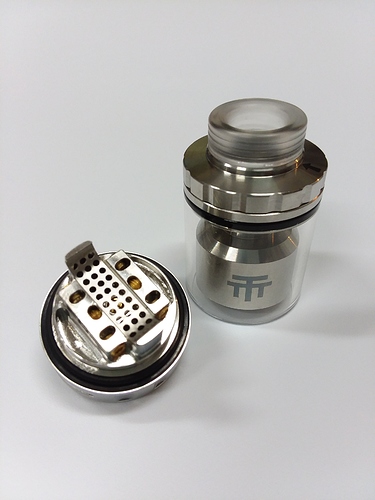 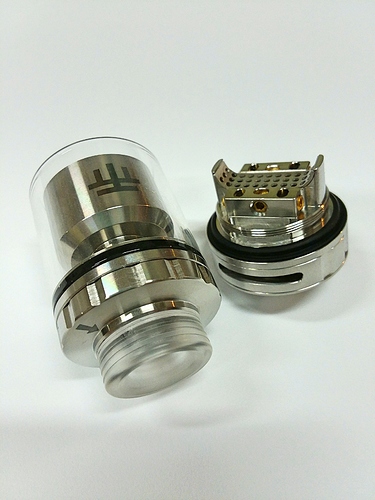 I don’t think I have liked the look of a tank more than I like this one. The basic SS version has a 3 T pattern on the chamber, and like many tanks has a simple branding design. It has some slight lined pattern on the top and base, but for the most part it is simplistic. The first thing you will notice is its sheer size, a whopping 28mm. For some, this makes no difference, especially if you have used a 30mm or larger tank like the Mason Dumptank or the Aromamizer Plus .

There is a bit of a length difference between the original Triple RTA, mainly because the chimney on the V2 is slightly longer. That isn’t a trade off, as the barrel seems slightly reduced from the original. That may seem like it would impact the flavor, but it doesn’t. The original Triple length was 41.9mm while the V2 is 45mm. A welcome change between the two is the short, white, translucent drip tip. It has a nice edging that runs the diameter of the tip, making for a nice texture, although really subtle. I prefer it over the Ultem and Doc Drip Tips of the original. It just makes for a much sleeker appearance. 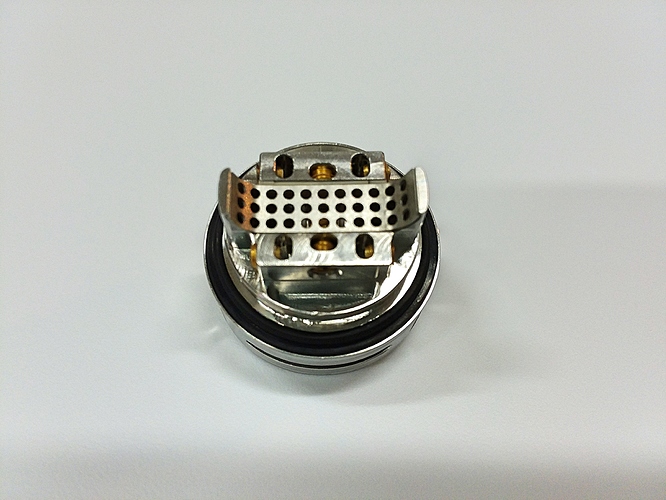 For its outward appearance, the greatest thing going for this tank is the ability to customize. In addition to the translucent drip tip, there is also a resin tip, as well as a resin bulging tube. I personally like the resin tip with the standard glass. I don’t quite like the look of a bulging tube, be it glass or resin, I just have never found the appreciation for them. I do like the option for a larger e-liquid capacity, just not the style of it. All in all, the body and style of the Triple and Triple V2 only have minor differences between them. The deck is where the real fun begins. 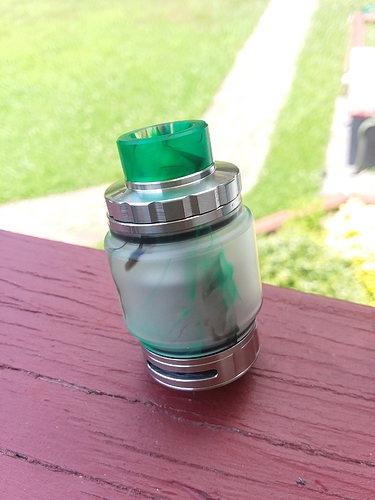 Before actually building on the RTA, I looked it over carefully, and what stood out was the wicking holes, as well as this white separator that sits carefully inside the airflow. This separator sits at a slightly diagonal angle, directing the airflow precisely under the honeycomb airflow. The wicking holes on the Triple II are pretty massive, in fact a single coil option would be looking at a bigger diameter just to accommodate the wicking hole. The airflow is enormous, and can be used fully open for a crazy airy vape, or closed down for a nice, restrictive flavor-fest. As for the top-fill, the hole is massive, so you can fill it without pushing the air around and forcing a leak (in case you are a fast filler). It is also butter smooth to open and close, and creates a strong seal.

The deck itself is quite different than the original, which used an elongated, horizontal airflow underneath the coils. The newer deck consists of a skateboard style platform with a honeycomb pattern of holes for the airflow. This pattern not only brings the airflow up under the coils, but along the sides of the coils as well at each tip of the deck. The style deck used is also similar to the Kylin Mini RTA, just larger and more elaborate. With the barrel being reduced, and the top of the chamber being so rounded and dome-shaped, there is little to no flavor loss. The deck is post-less, with 6 holes for the coil legs held in place by Allen grub screws. Regarding leg length, honestly, you can eyeball it. It is so simple to cut the legs to proper length, as long as you just don’t cut too much at first.

Let’s talk coils for a minute. This deck will fit a whole host of coil configurations, but if you are going to take advantage of the triple coil, I would keep the ID 3mm or below, just to make things easy. You could probably get away with 3.5mm, depending on the coil type, but sticking with a 3mm will ensure you have no touching, and also allow the cotton to fill the wicking holes perfectly. The first build I actually used on here was a 2.5mm ID Triple Core Clapton, and did a dual coil configuration. It actually wicked perfectly, without any changes to the tails on my cotton. You don’t really want to stuff the cotton into the wicking holes, but they are large enough make any fiddling with coil tails pretty unnecessary (for a dual coils at least). 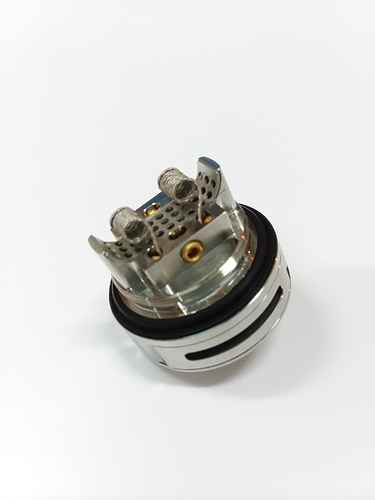 My next build on the Triple II was a triple coil, using a 2.5mm ID and the same Triple Core Clapton (32x3/40). Because of my diameter, they fit with plenty of room. The wicking did need a little combing, just to get the fit ‘lightly placed’ instead of shoved in there. I also tend to make 2 upward (vertical) slits in my cotton tails, just out of habit to avoid dry hits. It’s probably due to the Griffin wicking days, those very frustrating days. My resistance sat at 0.26Ω with the triple coil configuration. The wattage needed to be above 70w to really kick this build into gear, anything lower was just not enough power to really let the build shine. The flavor from the triple coil setup was intense and warm, and even with back to back vaping, I never got a single dry hit. I would definitely suggest that you have a good pair of batteries to accommodate the triple coil configuration if you choose to use it. 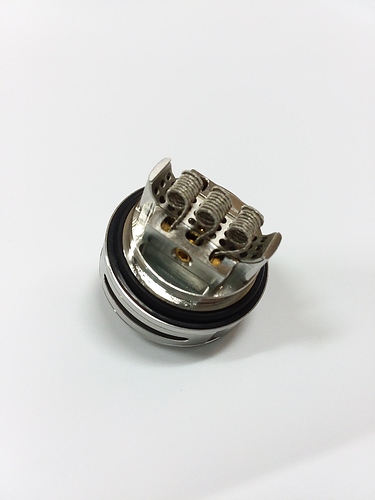 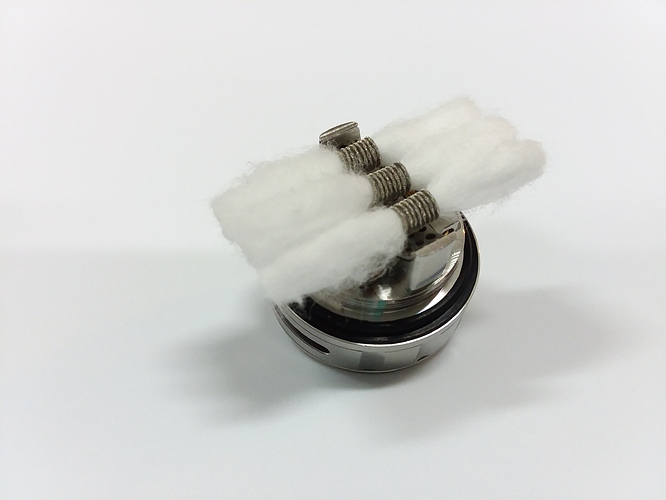 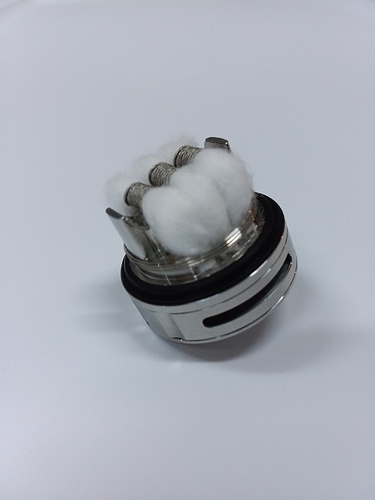 For a single coil setup, you will definitely want to use a larger style coil than what I have used for dual and triple, or at the least a larger diameter. Even a standard Fused Clapton, such as 26x2/36 would be appropriate. I have yet to use a single coil on the Triple II, but I plan on using a larger coil type to accommodate the wicking holes.

So, honesty time. I’m not a tank person. I really enjoy drippers for the flavor and ability to control my wicking precisely. I have owned several RTA’s that just could not keep up with chain-vaping without a dry hit. I was really quite surprised at how the Triple II checked all my boxes for an enjoyable vape. The airflow holes are really quite large, and a bit longer than on a traditional 22-24mm tank. This allows the for a really airy vape, and I even found myself closing it down about a quarter of the way.

The flavor from the Triple II is just gorgeous, I mean really close to what I get from my RDA’s, and I have even found myself using it more than my RDA’s since I have gotten it. Due to the unique airflow, the flavor is really intense and satisfying. That isn’t the only thing that really draws me to this RTA though. The wicking is just impossible to get wrong on the Triple II because the holes are just massive. They would have to be to accommodate 3 pieces of cotton. You would probably have to fan out the cotton a bit for a single coil, but I had no leaking at all using dual coils, even at a smaller diameter than most use. The Accessory bag also gives the option to use Phillip Head Grub Screws if you aren’t quite a fan of Allen Grub Screws, so that’s also a plus. The absolute winning feature here is the flavor that this RTA provides, as well as its ability to suck up juice and keep the cotton really saturated. The flavor is really dense and full, and being that it wicks like a dream, each hit is consistent. I haven’t had one dry hit during my usage of the Triple II. There are two tiny cons with this tank, and I hate to point them out, but I have to.

Even with these little minor cons, I have loved using the RTA, and they certainly aren’t reasons to dislike or not use it. The Triple II is certainly a juice guzzler, that’s a given, but the sheer flavor it provides is so worth it. I find this RTA totally worth a buy, even if I am constantly refilling it. Even if you don’t want to do a triple coil, the flavor from dual coils is superb. It’s a stellar RTA, which is something I haven’t thought of an RTA for a long time. With some users comparing the flavor of the original Triple RTA to an Aromamizer Plus, I can only imagine their thoughts on the V2. I have really enjoyed using it, it’s a fantastic RTA. 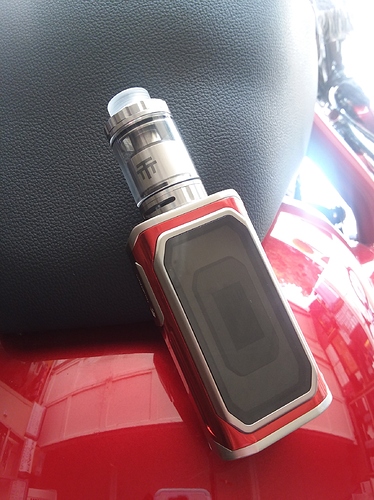 Thanks for the review. I’ll have to keep my eye on this one. I am not a tank person either. Though, when I am driving, I want a tank, and this one sounds like a good one.

Another fine review, Great looking deck, I like phillips screws too so that’s a nice inclusion.
It’s not too expensive, Preorder on VapeSourcing is only $29.00. I could save that up, duno if i could build such fine looking coils x3

.
Thanks for the review

Really great review! Nice to know more about the tank. Always wondered about that one.

Very good review and the pics are excellent too.

Outstanding review, covering all the bases, and left nothing unanswered @Silhouette !!

Thanks y’all! Yeah driving with an RDA is a pain. I usually end up just holding my mod with my legs and drip at a light. Good thing is I can get about 6 or 7 hits before needing to Drip with a 24mm RDA. The tank is certainly much easier, even though it guzzles like an old Chevy.

I have to say I’m pretty impressed with how far RTA designs have come. I remember getting the Moonshot when it came out, and absolutely hating having to wick it, it was a nightmare.