I’m gonna throw this out here because this is what I’ve been doing recently. I’ll make a new recipe, usually 15-30ml depending on how confident I’m feeling (and how familiar I am with the flavors involved). I mix it and test it right away. If I’m not happy with the immediate result I’ll set it away and re-test in 3 or 4 weeks. If I like what I’m tasting right away, I’ll go ahead and make a bigger batch, 120-240ml depending on how much I like it. (For reference I’m currently going through about 20ml per day, so a 240ml bottle would last about 3-4 weeks if I’m also vaping other recipes.) Then I continue to vape it throughout a 3+ week steep and see where I like it best along the way, taking notes as I go.
I used to try really hard to steep every new recipe for a minimum of 1-2 weeks before doing a true test (although I’ve always had a hard time waiting for that first little sample… Lol), but recently I’ve been really busy and have liked to be able to know right away if something is shake and vape worthy so that when I’m either running low or simply getting bored of what I already have steeped, I have options for instant gratification.

Does anyone else do this? I know it’s not considered “standard protocol”, but it seems to be working well for my needs!
If you have recipes that you like immediately AND throughout a thorough steep, would you post them here? I’m always looking for new ones, and I feel like those kinds of recipes can be helpful at some point or another to everyone! Cheers!

Lots of people do. Some people don’t even believe steeping helps. I vape trough it too on occasion. If it gets better, that’s great. But if it tastes pretty good before the reccomended steep time, I have at it. I make small bottles first then make larger batches. There’s even times where I get sick of something I thought was great before finishing the bottle.

I pretty much always only steep overnight (1day) before testing, (always 20ml testers) then may put away for awhile if needed. Had some so-so then go back to after long steep (sometimes 3 mo) and great. Vape bout 30ml+ a day, so got some that are great off the shake that I’ll mix up 30ml every 3 days, but then after steep either one flavor fades or another intensifies. Example; I like Brandy (FA) but only off the shake then it fades, so for longer steep times I’ll add it later, just before vaping. Can’t say I have any that are good off the shake and throughout a thorough steep, Yet.

If you do SFT (single flavor testing) before ever mixing a recipe, and refer back to the notes you took, that whole process could probably be avoided because you’ll already know what to expect from a given flavor.

I always steep for a month before trying a mix. Including my sft.

I has at least 30-40 bottles ready to vape, for if my friends suddenly wants some mixes. So it doesnt bother me too much.

I wouldn’t fault your methodology. If it works for you. Great! That’s what matters. Personally.l, I just mix every two weeks and steep everything 3-4 weeks. I always have something new in the works and mixes I really enjoy.

Now that I am ready this morning figured I’d post a pic. 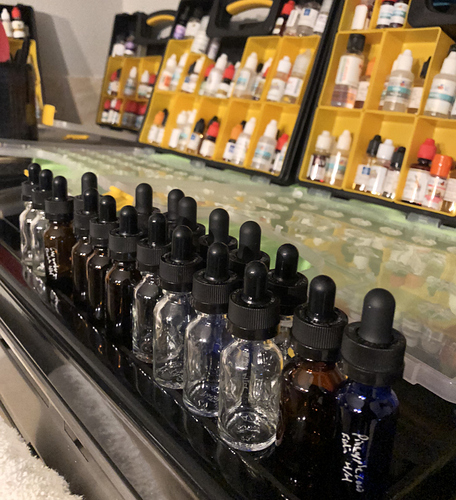 Most times I try to stick to the 2 week rule @Ths1MxrChk. Sometimes I give in.

First 125ml batch, I’ll vape through. It will last about a month. I’ll gauge subsequent batches per results of the first. Most of my mixes show little or no improvement after 48 to 72 hours. They all show improvement after 24 hours.

I have several recipes I do that with because I like the taste right away and then a week later I like the new taste and the next week there are new nuances and I like it then also. It levels out after 4 months.

It totally depends on the flavors used and at the % too. Some juices are literally shake and vape, a lot are vapable after a night’s “steep” and some really need weeks to mature or even taste OK.
When I shake and vape, most juices are a little “airy” though, they lack body. I don’t recommend doing it with flavors that contain alcohol as a flavor carrier… they’re usually very harsh to vape even if the flavor is OK. Maybe that airy experience is because I mix a lot with super concentrates and ultras… whenever I have a mix with concentrates like TPA, CAP or FW I’m not getting that very often.

True, and I do that often. The only thing is you’re not always sure what more than one flavor combined will taste like. But 100% keeping sft notes helps the process a lot.