VapeyMama's "is that a pod in your pocket..?" review of the Vaptio C-FLAT Pod Kit (And a giveaway!) 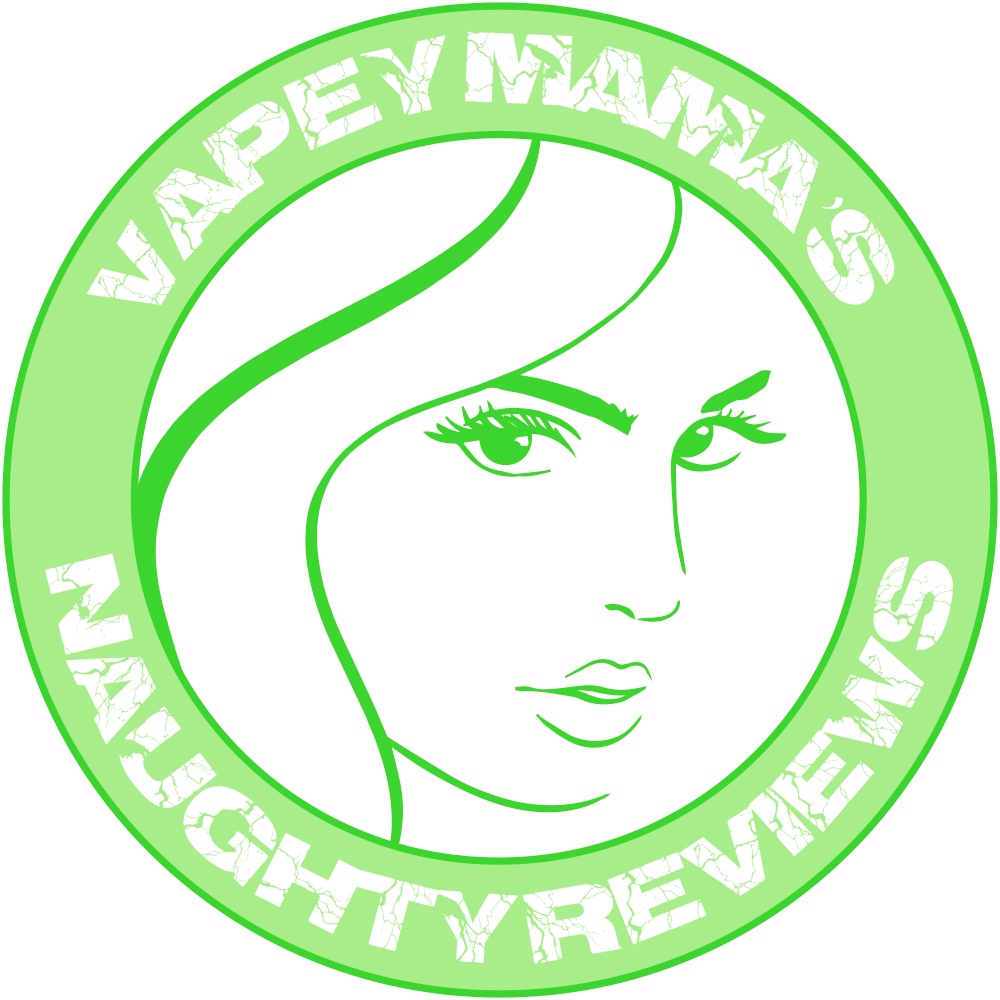 Hello friends! Why yes, it is a pod in my pocket (but I am also happy to see you 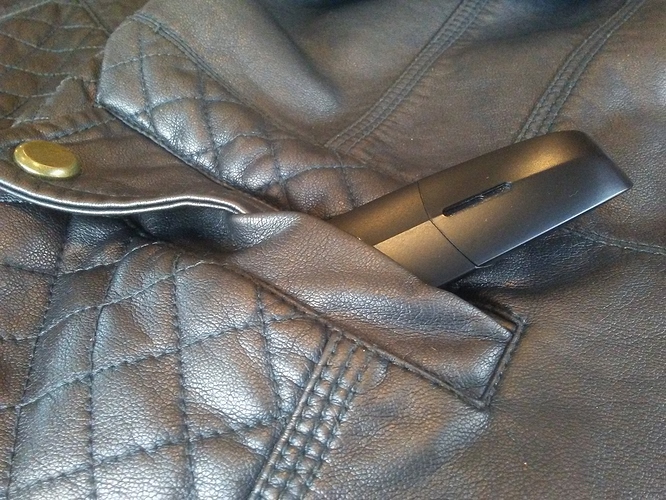 Today I’ll be sharing with you the C-FLAT Pod Kit which was sent to me from Vaptio for this review. If I can find it…it’s quite small. Now lets admit, sometimes good things come in small packages. So I set out to give the C-FLAT a fair shake.
First of all, its small. Yeah, we covered that. But that’s the point of an all in one kit like this so we’ll count that as a plus! Its pocket friendly as fuck. Part of it’s pocket friendliness is that there is literally one button to press. And the button is ever so slightly recessed so it’s not likely to accidentally fire in your pocket (although I’d still recommend that you lock it before you pocket. 5 clicks off/on). There are no controls other than the fire button so no worries about pocket dialing your wattage or anything. With a fully charged battery (which has a tiny capacity of 350mAh) you can expect up to a whopping 15 watts of power. Wooowee calm down there buddy! (Sorry, that was a bit snarky…) And speaking of small, the coil in this little guy is about the size of a pencil eraser…if that.

As you can imagine, I didn’t have high hopes for this device but I have to say, the amount of vapor that this itty bitty coil can produce actually impressed me! The flavor is ok, nothing to write home about, but it could be worse. On a scale of 1 (no flavor) to 10 (OMFG flavor), I’d give it a 5. The refillable juice cartridge is not really able to be cleaned and the coil is built into it. So ideally you would vape one kind of juice (or multiple juices with complimentary flavor profiles) until your coil needs to be changed. At that point the entire cartridge/coil gets thrown out and replaced.

Vaptio claims that this can be used for mouth to lung or direct to lung vaping…by flipping it over…?

Hmmm… I flipped and flopped all over the damn place and didn’t really notice much difference other than if your button is riding on top the mouthpiece delivers the vapor toward your tongue rather than the roof of your mouth. Apparently with the button on the underside its DTL and with the button on top its MTL. Really though, since there’s no way to change the airflow it really just boils down which finger you like to flick your fun button with.

As I mentioned, the battery capacity is only 350mAh, so don’t expect to get away with an all night marathon of chain vaping on it. There is pass through charging though, so that’s a saving grace. From completely dead, the battery takes about an hour and a half to charge (assuming you’re not vaping on it during that time. Seriously, give the poor thing a breather already. Geez…).

So let’s have a closer look at this little guy. 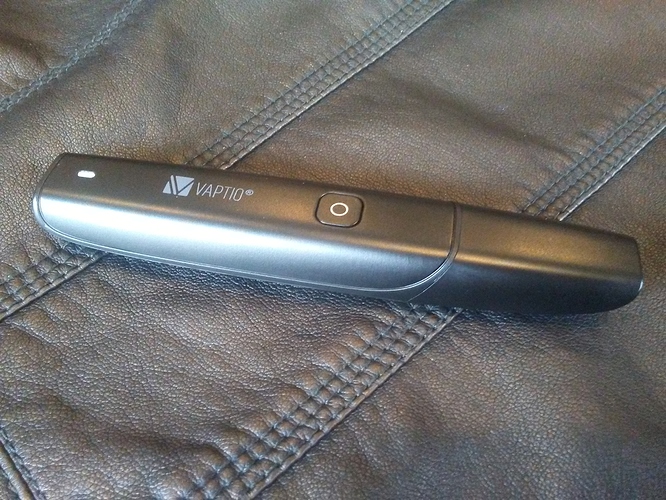 The coil/cartridge snaps down into the top of the battery section. Two metal prongs make the connection with the bottom of the cartridge, providing power to the coil. 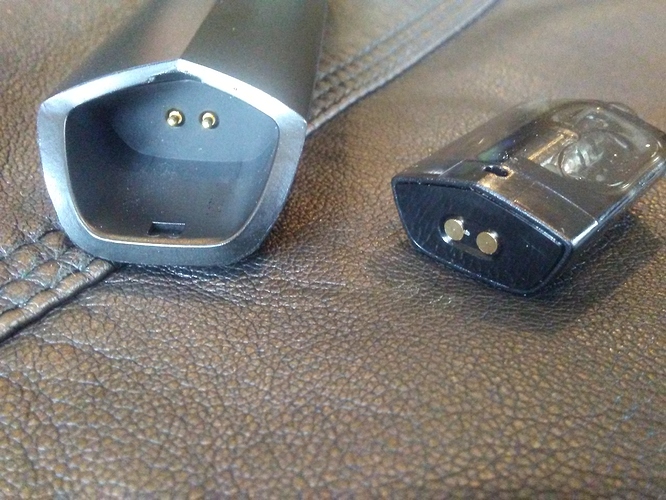 The top cap/mouthpiece snaps down over the coil/cartridge. On the top (bottom?) of the cap there is an open slit that doubles as your airflow opening and a window to see your juice level. Unfortunately its so small that unless you shine a light into it, its very difficult to actually see how much juice you have left. Not a big problem though, since you can just pop off the top and take a peek. 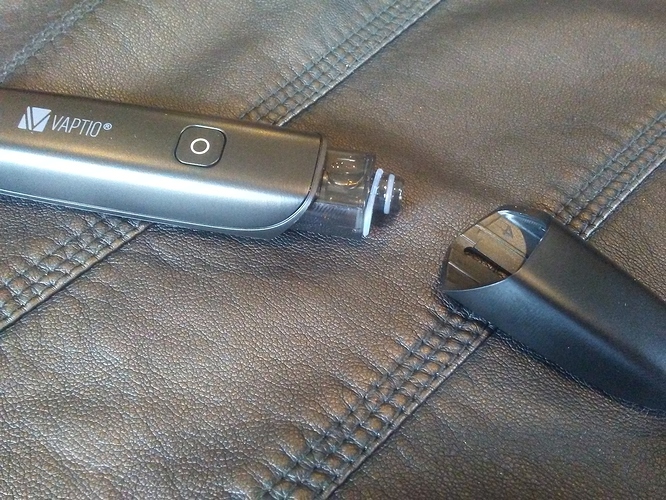 There is a green light down towards the bottom of the battery section that is lit while you’re firing and charging. And the charging port is on the very bottom end. 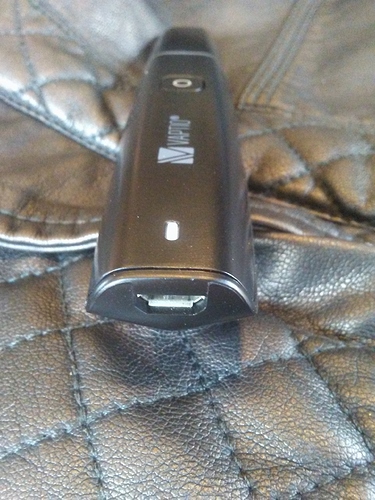 And that’s about it! Nothing fancy, nothing complicated, definitely nothing extra.
Now, who would a piece of gear like this be good for?

I can think of two main groups of people:
1.) Stealth vapers. With a high pg, high nic eliquid, you could easily get away with vaping here there and everywhere. The higher pg will reduce the amount of visible vapor and since you get such a mild vape from it you can easily bump up your nicotine for a quick fix without a nasty throat hit. I vape mostly 1mg nic eliquid and my throat had no problem handling a load of 9mg juice from this setup.
2.) New vapers, and especially those with cigarette damaged lungs. This is a gentle vape. A lot of starter kits being put onto the market are actually quite powerful and may be too much to handle for people who’s lungs are damaged from years of heavy smoking. Its also obviously simple, so a new vaper trying to kick the cancer sticks won’t have to worry about multiple options and settings. With the snap in coil it couldn’t be any easier.

If you’d like to try the C-FLAT out for yourself or pick one up for a friend who wants to quit smoking with vaping, you can find it for $39.99 here:
https://vaptio.com/productbuy/productbuy_558/
Or… win one!
I will be giving away a C-FLAT Pod Kit to one lucky little ELR member. If you’d like a chance at the drawing, head over to my C-FLAT review on the Steampugs site and leave a one word comment that you feel best describes the C-FLAT, as well as your ELR screen name. The drawing will take place on Friday, October 27th right here. Good luck!

And while you’re there, take a few minutes to check out the rest of the steampugs.co.uk site for some amazing reviews of all kinds of sweet vapeology! And don’t forget to meet the Steam Team!

Bravo, very well done! Comprehensive run down of the poor little thing. I guess he should be happy there wasn’t a load of ridicule all over him😜

So basically leave it on the shelves?

For most vapers… Yes. It serves very specific purposes, but unless you fall into one of those two categories that I mentioned its probably not for you.

Might be good in a pinch, but for $40 I will save that for my squonking set up. Nice review Mama.

It does break the string of reviews with the mention of the word “girth”. Poor little guy. Maybe if you turn it sideways?

This little guy is the anti girth! Well done VM.

I am sure it would be perfect for a new vaper that laugh coughs.

good to keep in your glove box for emergencies

I did read that as love box - where are my glasses

No news man…still waiting, we thought it was gonna be last night but Jo slept straight through

She just doesn’t wanna come out

Good job! You really covered every aspect of this little guy! Fun read!

Dammit I knew I forgot something…
Sideways would be girthy!
Thanks TM