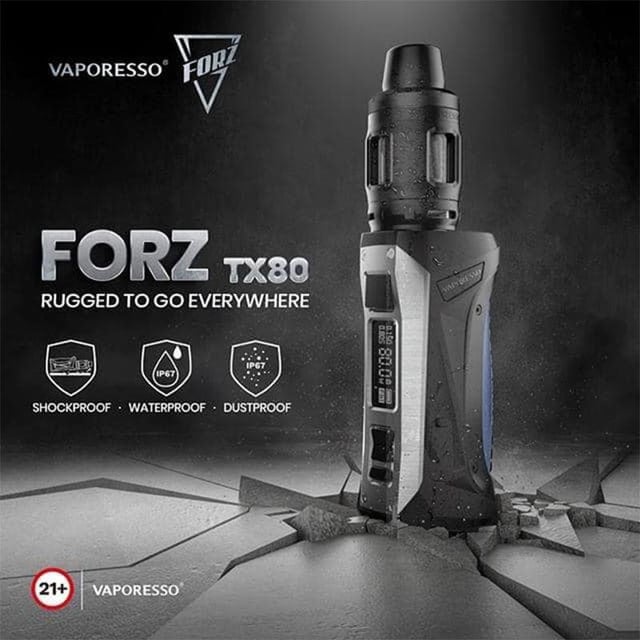 Vaporesso sent me this kit for a review. I’ll post info and my thoughts about it.
Vaporesso has been on a roll this year. The Forz TX80 kit is a single 18650, IP67 rated mod and a tank that also has protective elements. There’s cut outs to see your liquid level but the rest of the tank has a rubber like protective layer. Even the drip tip comes with a sleeve to keep water or debris out. The kit is the first of it’s kind even though the mod is similar to another.

Let’s start off by what you’ll get with this kit.
Whats Included:

The Forz TX80 mod
I know what you’re thinking. Vaporesso copied the Aegis Solo. I’ll admit I see similarities, but I’ve also noticed improvements. This mod is slightly smaller, and also has way more features. It just simply vapes better IMO. I’m not saying the Aegis Solo is a bad mod, but it’s very basic compared to this. Like most of Vaporesso’s mods, the Forz is packed with features. It has their latest Axon 2.0 chipset. They’ve introduced another new mode this time. In addition to having Pulse and Smart TC, it also has F(t) mode. The new mode is actually the default mode for this mod.

The mod has a pretty basic but bright old school screen. It’s pretty easy to navigate once you get the hang of it. In addition to the fire and up down buttons, there’s a menu button. It’s located just below the up down buttons. To enter the menu you can click the mode button 3 times quickly or just hold it for a couple of seconds. In the menu you’ll find these features-

VW is basic wattage with a soft, normal, or hard pre heat.
VT is variable Temperature or TC.
VV or Variable Voltage is similar to setting the dial on a potentiometer. The mod will fire at the voltage you select (0.0 to 9.0V).
BP (Bypass) is direct output mode. It’ll perform similarly to how a mechanical mod would.
SP stands for Super Player. It’s a mode meant to fire super low ohm builds like 0.05Ω.

Brightness for adjusting screen brightness.
Smart Wattage can be turned on or off. It reads the resistance of your coil and automatically sets the wattage to where it thinks it’ll be best.
Flip Screen is self explanatory.
Auto Eco can be turned on or off. When on, it’ll warn you when your battery gets low and ask if you’d like to use economy mode.

I’m not going to go over all the modes that have already been in previous mods. The new F(t) mode is interesting though. I can actually tell the difference between this and Pulse mode. F(t) is more like a TC or replay type hit. At least that’s what it feels like to me. Its a smoother hit. The power seems to be delivered on a more level plane than in Pulse mode. I’ve been alternating consecutive hits in F(t), then in Pulse. It might be in my head but I think I get slightly better flavor with the new mode. It’s nothing drastic, but still nice to have options in performance. I’m usually a strait wattage vaper, but I’m having a good time with Vaporesso’s new modes.

The mod is Aegis like for sure. It has a screen & screen frame section among other areas. The screen frame is brushed stainless (or a light gunmetal?) The Aegis Solo has no such frame. The majority of the body has a rubber or silicon layer covering the actual frame. Towards the back is another frame (Geekvape usually colors these.), and inside that frame is a leather section. This time, I think it’s actual leather. There’s some stitching and Forz branding.
I took a size comparison photo vs the Aegis Solo.
I also took a picture from above showing the 510 connector platforms.

The battery cover is located on the bottom of the mod. It unscrews by lifting a little latch on the cover itself. It takes two full turns before you can lift it off. It gets sealed up by a beefy o ring just above the threads.

The buttons are clicky but not loud clicky. It’s a softer click but I doubt anyone cares. There’s a charging /update port located on the side. It uses Type C and has a cover that blends into the rest of the body well.

The tank has a rubber type frame covering the glass. The top cap and (Triple slot) airflow ring are regular metal. The drip tip is “TFV8 styled”, meaning it’s 810 but with double o rings on the bottom. It has a nice taper to it and an included cover. I love these for keeping dust, or pocket lint out. Uwell does this with their Nunchaku tanks and I’ve always appreciated it.

The top cap is threaded. It’s only takes about a third of a turn and it comes off. With the top off you can see your fill ports. They’re a bit strange because there’s a ledge right below the openings. I’ve had to refill slowly in fear that juice will spill. It can clog up easier with that ledge there. The bottom section is also threaded. I noticed the threads were rough while taking the bottom off and on. So yeah, not the best threads there. Taking off the bottom section reveals your plug n play coil. They slide in pretty easy but some people might want the provided tool to remove the coil head. I had no trouble just using my fingers though.
Here’s an exploded view of the tank.

The kit comes with one coil in the tank and a spare. Ones aimed for around 70W and the spare is around 50W. Both are singular mesh coils. They look to have the same inner diameter, for airflow to travel through. I took a pic trying to show the mesh designs of each coil, .4Ω on the right.

When I first saw these I thought and hoped they’d be the same size as their Cascade tank. Unfortunately, they changed the size/design so they’re not cross compatible.

Even though the other one is right in my preferred wattage range, I liked this coil better. I used it all the way up to 80W and had no trouble. The flavor is pretty great but I noticed a similarity to Freemax’s Mesh Pro 2 coils. The sweetness of my juice really comes out with the flavor. I asked Vaporesso what the material the mesh is made out of. I suspected stainless steel but they told me they told me nichrome ?

These are really good coils but I think they’re not a great choice for this kit. Any single 18650 battery will struggle to power 75W. I tried it on my Gen mod at 75W, and it hit a lot better. More power, more flavor, and it had more vapor. The tank drains rather quickly with this coil but the flavor is awesome. I used it primarily at 75W on another mod.

This was another good coil. It’s also an airy coil since the opening is the same. I found myself cutting the adjustable airflow ring down quite a bit. I think maybe they should’ve narrowed the inside bore of the mesh coil to avoid this. It vaped great though and had better than average flavor.

This coil is more fitting for the kit. It uses less battery, and burns less liquid. You still get a nice satisfying, flavorful vape with this coil.

Conclusion:
I enjoyed the kit for the most part. The mod is the star of the show but I like the tank better than I thought I would. I like that it’s protected and how well it performs. It’s got some quirks but Vaporesso has always been great at making coil heads IMO.

Back to the mod, I love it but I’m a little baffled. I don’t get why this isn’t a single 21700 mod. Size would increase a bit but the bigger cells are proven performers. Maybe in the future I guess… The Forz TX80 is still a nice compact mod that’s built tough. I would recommend it to anyone looking for such a device.

Vaporesso is also releasing an RDA version of this kit. Instead of the subohm tank it comes with their new Forz RDA. It’s sort of a Dead Rabbit/Drop Dead type RDA. I’ve been testing one out for a few days and can tell you it vapes great. It’s also constructed really well. I’ll be posting a review for that soon.

I want to say thank you to Vaporesso for sending this kit my way. I’ve been enjoying using it. Big thanks to anyone who took the time to read. If you have any questions, I’ll try to answer the best that I can.

Nice review. You covered all the necessary info. I have to admit that I’m not that interested in the mod mainly because it doesn’t take a 21700. I found it odd that Vaporesso didn’t go for the knock-out on this. I wouldn’t mind getting my hands on this tank though. Might be good on an Aegis Legend while out and about. Thanks for the review!

I’m not that interested in the mod mainly because it doesn’t take a 21700.

I told them that too. I asked if they planned on making a series of them or one that could take a 21700 at least. I didn’t get an answer. Sometimes they listen to us, but most times they just make whatever they want. This probably would’ve sold so much better if it was 2X700.

The tank really does vape great. The bottom threading could use some work but otherwise it’s a solid tank.

I do like the looks of the Forz mod better than the Aegis equivalent. It has a cleaner look IMO. Let’s hope the V2 is a 2x700.