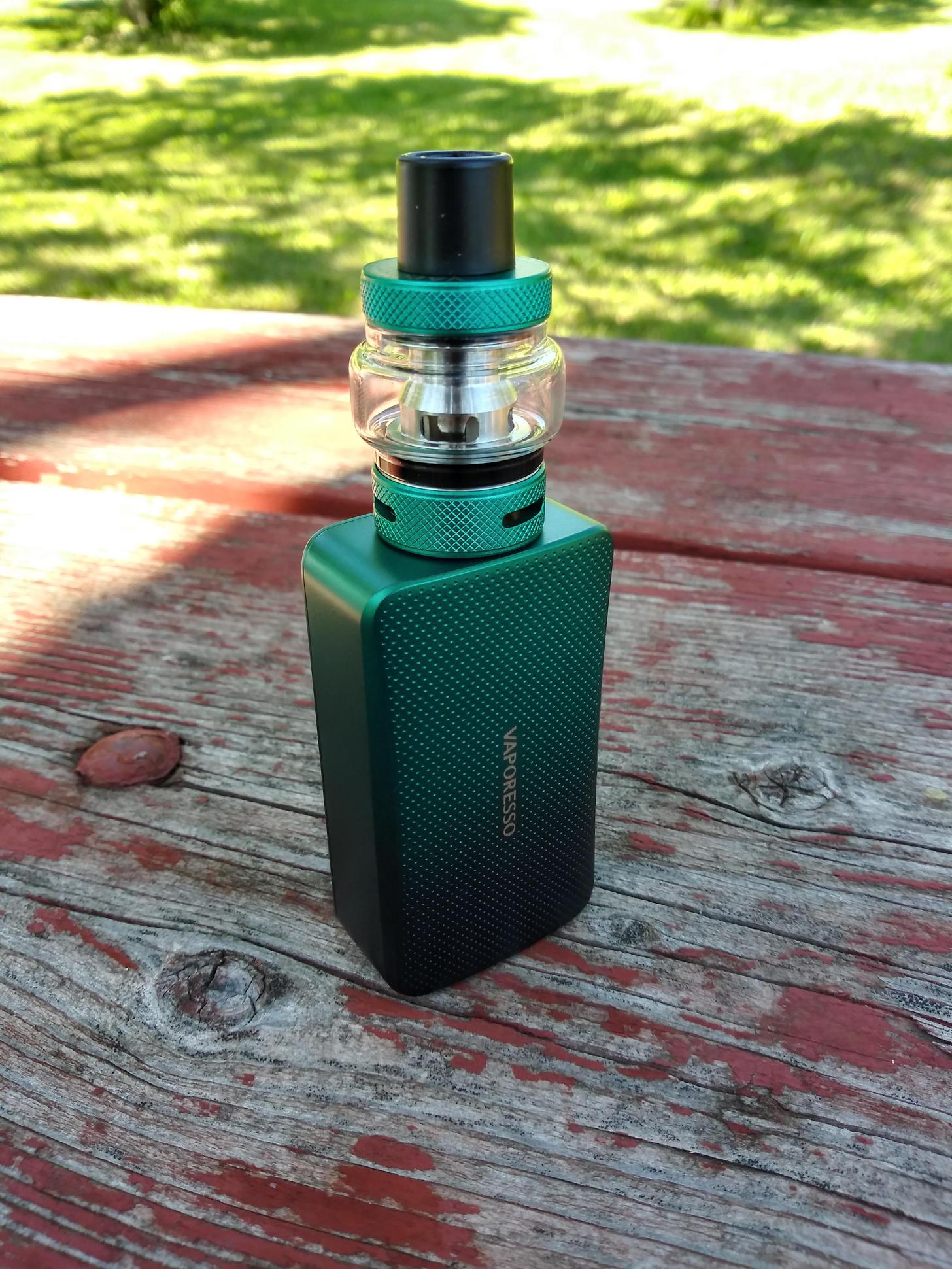 I requested this kit to review from Vaporesso. They were kind enough to send it to me. The Gen Nano is similar to the PM80 kit, but in the shape of a more conventional kit. Instead of a “Pod Mod”, you get a miniature Gen mod. Instead of a plastic pod, you get a 22mm tank to use instead. It uses the same GTX coils.

The Front of the Packaging

The Back of the Packaging

What’s inside upon opening

What else is under the kit

The mod that comes with this kit is a mini Gen mod. It has a built in battery and the famous Axon chip inside of it. It’s very similar to the Swag 2. It also has almost the exact same features and screen as the PM80 SE. The one difference being, the Gen Nano also offers Pulse Mode while the PM80 SE uses only Smart VW. It has all the bells and whistles that the full sized Gen mods and Swag 2 has. Pulse Mode, Power Eco, Smart TC, and all of the DIY modes. It’s packed with features.

This is a tiny mod. It has a 2000mAh internal battery and is charged by a micro USB cable. It’s pretty good for what it is. It doesn’t hit like a Gen or even a Swag 2 but gets the job done in a small form factor. Most tiny mods like this for pod mods with internal batteries aren’t known for being heavy hitters. Their size and portability are it’s main attractions.

This is a nice little “econo-tank”. It’s not going to blow huge plumes of vapor or anything like that. Think of it as a PM80 pod, only a lot nicer. It comes with a bubble glass pre-installed that holds 3.5ml of e liquid (2ml w/strait glass). It uses the same GTX coils as the Target PM80 kits. They’re PNP (Plug & Play) thread-less coils that sort of slide into place by pressing them. When you want to take the coil out, you can use your finger nails or a tool, and they slide out.

I had a bit of trouble with the PM80 and PM80 SE kits with the flavor. There’s an odor I can detect coming from the contact area and I can only assume it’s something internal. The problem is, the airflow on those runs right along the contact area leaving me with tainted plastic flavor. Most people probably don’t notice it but I did with both. This tank, fixes that problem. The airflow doesn’t run along a plastic surface. Besides the flavor being way cleaner, you can use this tank with whatever kind of mod you want.

The tank has some nice knurled sections on the top cap, and on the airflow control ring. It has dual airflow holes and the airflow control ring has a stopper. The color of the tanks matches the mods really well. The top fill is reminiscent of Vaporesso’s Veco tanks. The top comes completely off leaving only the chimney. You fill it up to the o ring and re cap it. If you’re not familiar with the Veco, think Aspire Cleito. It’s like that. The bottom o ring is beefy and holds the glass in place.

Here’s a photo of the tank taken apart.

I’ve tried this coil in the PM80 and PM80 SE kits. I could tell it was a really nice coil other than the slight plastic flavor (when using in pods). I use these coils at 50w and in the tank, get nice clean flavor. These things fire really quickly. It’s like instantaneous vapor. They seem to last a good while as well. I got several refills using it and took it out pre maturely to try the other coil. Think of these as midrange, sub ohm, singular mesh coils.

This coil wasn’t bad. It’s got less airflow and doesn’t create as much vapor. The liquid in the tank lasts a lot longer as well. I used it primarily at 25W. Flavor isn’t near what the .2Ω coil was but that was to be expected. It was about as good as you’d expect a 25W coil to be I guess. I usually vape 3mg but should’ve tried 6mg with this coil. It would be perfect for it. I probably would have appreciated this much more if I gave it a higher nicotine role.

My thoughts about this kit-

It’s a nice little kit. To tell you the truth I was mostly interested in the tank. It’s pretty nice and performs well. I haven’t tried the RBA in it yet but it does fit. The coils vape a lot better for me in this tank. Like I said, most people don’t notice or detect the plastic type flavor. I think it’s just me. I’m sensitive to it or something. Vaporesso does make nice coils, they always have IMO. The only times I’ve read complaints are with those Skrr tanks. I don’t have one of those. The GTX coils I’ve used are pretty good, especially in this tank.

Using a little mod like this as my primary vape device wouldn’t work out too well. I’d probably kill the battery towards the evening using the GTX .2Ω Mesh coil. Battery life would obviously run longer with its lower wattage coils. In my eyes this is a perfect alternative to “Pod mod” kits. I see this as a PM kit only shaped more conventional. I think treating it like a PM kit is the way to go. Something to slip in your pocket for when you’re out and about. It’s a stealth set up. Here it is next to a full sized Gen S.

Overall I’ve been really impressed with the quality of Vaporesso’s kits. The Gen kits just look and feel classy. I’m a big fan of the light weight and finish on them. Before I had one, I was questioning the durability of that rubberized coloring method. I’ve had a Swag 2 for a while now and use it a lot. The color hasn’t faded and the bottom isn’t even scratched. Most of my other mods show signs of wear on the bottom from being picked up and set down. I’m just super impressed with the quality.

Big thank you to Vaporesso for sending this to me when I requested it. I’ve enjoyed using it. Also, thanks to anyone who read this review. If you have any questions, I’ll try to answer as best as I can