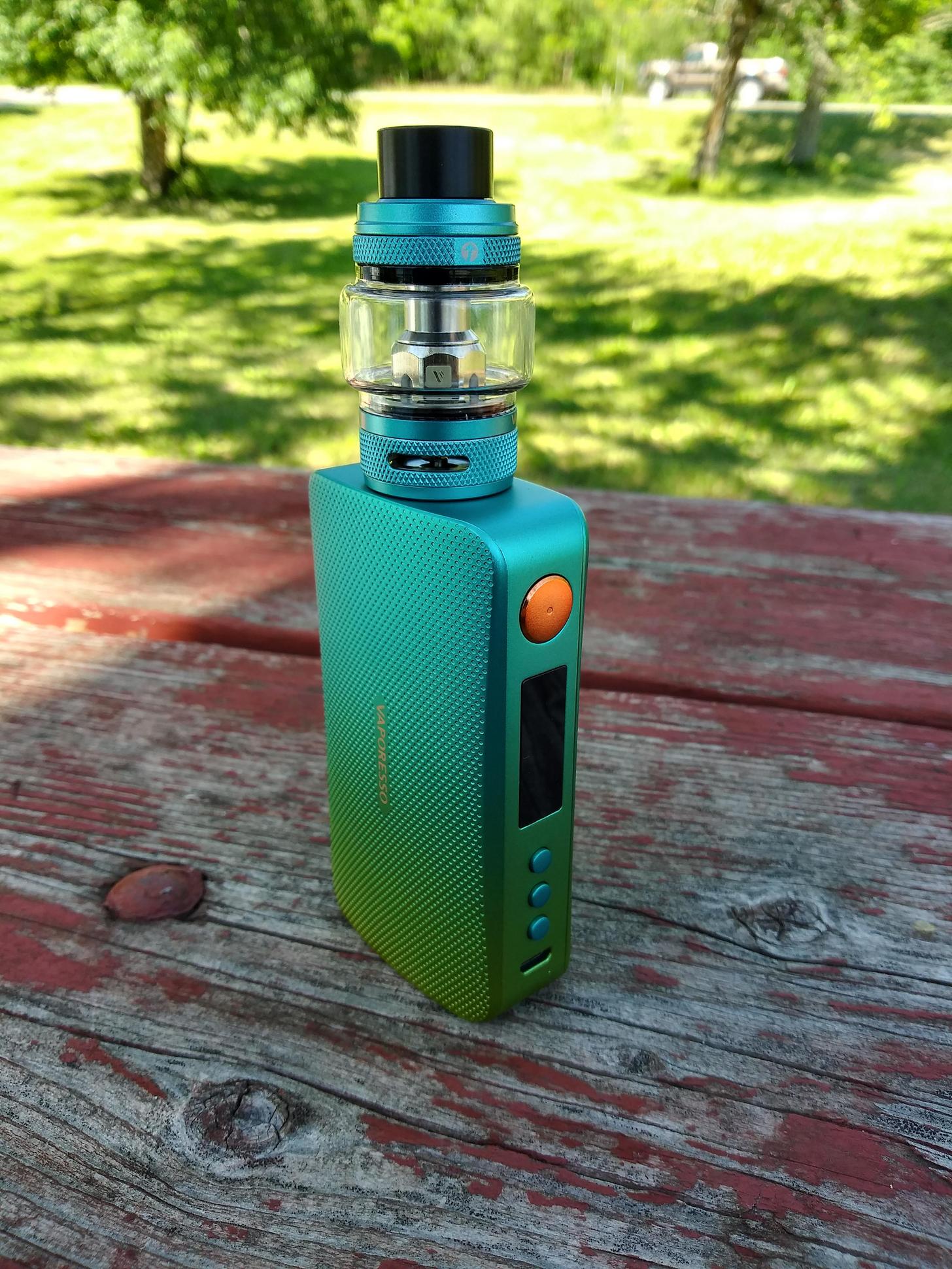 I requested this kit from Vaporesso. They kindly sent it to me for review. I saw they had new (summer) colors for their popular Gen mod, and a new tank to go along with it. I’ll try to go over both the best I can.

The Gen S mod is basically the same as the original Gen mod. It has the Axon chip which is packed with features. These new mods just have new S for Summer colors. I received the Lime Green version. It starts off as gold on the bottom but quickly blends into light teal? It’s a beautiful mod with the same rubberized coating on the original Gen and Swag 2 devices.

The mods battery compartment is revealed when taking off a side cover. The battery orientation is marked but it’s black on black. The power button and centered 510 connector are copper colored. There’s some minor branding on each side of the device that also copper colored.

The screen is old-school looking (non-color) but displays most of the pertinent information. There’s three buttons below the screen, up, menu, and down. To access the menu, click the menu button three times or just press and hold it. There’s several modes which I’ll list here-

Pulse Mode- This is the default mode that works like regular wattage mode. It does this mode really well and fires almost instantaneously. It supposedly pulses every millisecond to give you a better experience. If I didn’t know any better, I would’ve thought this was just wattage mode.

Power Eco Mode- This mode is supposed to help when the battery is getting low. When your cell drops below 40% the mod will prompt. It asks if you’d like to switch to Power Eco Mode. It’s basically “Battery saver” mode. I’m not really convinced it helps though.

Smart TC- Whenever you attach an atomizer that has TC capable wire, it scans and asks you if you want to use Smart TC. I’ve tried it with SS and selected yes. The Gen S did a pretty good job in Smart TC. It detects the wire type and resistance and then goes to a temperature automatically. I couldn’t find out how to adjust the preheat wattage in this mode. It performed well enough I guess but I’m not a TC fan.

VV which is variable voltage

BP is Bypass. This is direct output.

You can also (lastly) select System Set in the menu. Here’s what’s in that sub menu-

Puff Counter- puffs is kept track of but is not displayed on the screen. Here you can see your total amounts of puff and reset the counter if you want.

Brightness allows you adjust the brightness of the screen.

Smart VW stands for Smart Variable Wattage. You can turn this on or off. When on, it detects your coil and will automatically change the wattage to where it thinks will be the best.

Flip Screen is pretty self explanatory.

Auto Eco On/Off you can turn this on or off. Not sure if it affects anything really. Maybe you can shut off the 40% battery life remaining prompt for Power Eco.

Default yes or no. I think it resets everything to like when it’s new.

Version tells you which firmware version your device has.

The tank is another in the long line of NRG tanks. It uses Vaporesso’s GT series coils (Baby Beast compatible coils). This tank might hold the most liquid out of all of the Baby Beast coil tanks out there. I haven’t heard of any holding near 8ml. It has a very classy feel and look to it. The color matches the mod well also.

Its 25mm wide (30mm at widest point of the glass) and holds 8mls of e-liquid. The drip tip and filling port are both reminiscent of the original Cascade. The drip tip is a 510 wide bore that slips nicely over a small circular ridge. The top pivots to reveal the fill port. The gasket inside is serviceable. The top part is reverse threaded and comes off. It has some nice knurling on part of the top portion of the tank, and on the airflow control ring. The AFC ring is pretty nice, slides smoothly, and there’s a stopper.

The Gen S kit comes with two different coils. A dual mesh coil for using in the 60-70W range, and another singular GT Mesh coil 50-90W.

This is a dual mesh coil. I liked using it well below the recommended best at 55W. After a slight break-in period, the flavor is really good. I’ve been using BB styled coils for years. I’ve tried a lot of different types and brands. These are probably my favorites out of all of them. They also work well on direct output devices. They’re just really good coils IMO. I like these ones a bit better than singular mesh coils. Dual mesh is usually less airy than single mesh as well.

I’ve used these coils for a long time in my various other BB coil tanks. They’re about as top tier as you’re going to get for this style of coil. It’s a singular Kanthal mesh screen type coil. I use them right aound 50-55W and get above average flavor and longevity. This one makes the tank have a more open draw than the GT4 Meshed coil. Vaporesso has always done a great job at keeping these consistent so you know what you’re getting. I’ve never got a GT Mesh coil dud ever.

Vaporesso basically released another batch of their popular Gen mods in new colors and included a better tank this time. Most people can agree the mod is pretty nice. It’s light weight, and has a unique finish on the outside. The colors look great but are sometimes two toned, which turns some people off. The mod is also on the large side. It’s weight nicely off-sets that down side though IMO. It’s got plenty of features and modes to play with. To tell you the truth I just prefer to set my wattage and vape on it. I know a lot of others can appreciate what’s going on with the Axon chip set though.

The subohm tank is one of the nicest looking tanks I’ve ever had that uses Baby Beast styled coils. It also holds the most liquid out of those tanks too I’m pretty sure. I do prefer quarter turn top caps like the Cerberus has though. I’m pretty against slider tops of any style because they suck to keep in pockets. This one isn’t nearly as bad as the Fireluke 2 but still can come open. All in all its a nice tank from a company that does a great job at making coils. Along with Freemax, Vaporesso is one of the top companies out of China at making consistent quality coils IMO.

Using the total package is a pretty nice experience. This kit’s an all around looker and performs well. I’d recommend it to starters and experienced vapers alike. It might not be everyone’s favorite but it has many positive qualities.

Vaporesso has been making some very classy looking kits I have to say. I know they’ve made huge amounts of different pods lately too. It’s nice that they haven’t abandoned classic styled kits. I’ll always be more interested in mod/tank kits than “pod systems” or pod mod kits.

Big thank you to Vaporesso for sending me this kit. Also thanks to anyone who read the review. If you have any questions, I’d be happy to try answer.

I wondered if there were any differences compared to the Gen (1). Glad to know it’s just the color options. I love the original Gen but don’t see a need to buy another. Thanks for the review!

I have looked at the Original over and over again. ill buy it one day Ty for your thouggts

Thank you for the review. Seems like a decent mod for sure. I have an older Vaporesso Luxe with the Omni 4.2 chipset. The thing that annoys me about it is you have to dig down, click here, click there etc. just to change a coil setting. Too much clicking I guess.
I can only assume, from the pic of the Gen S screen, that they (hopefully) simplified the menu navigation.
Your review gives all the pertinent information I’d want to see so good job!

Thanks for reading guys and gals. It really is a nice kit. I think the chip is the same as the original Gen mods. The mod’s menu is easy to navigate. Once I got it set, I just use it and don’t play with the settings. I’m not sure if it allows you to adjust your pre-heat setting (wattage) in TC mode. Maybe it does in the DIY settings. I can play with some more and find out.

I actually like the look of that green/teal one