Has anyone used flavors from vaporworld? Prices are so much less than the “name” brands ($13.99 for 120ml vs $32.99 for something from TFA). As I am beginning to make much larger batches of juice I need something to bring costs down but I will not sacrifice quality for price. I’ve tried searching but it doesn’t seem that there are any real unbiased reviews.
Thanks!

I’ve never tried anything from VaporWorld. Never heard of them.

I cannot comment on vaporworld flavours however it may be false economy. It will may not work out cheaper as you may well have to use a bunch more (as i said you will have to work it out as I have not ever used them).

I would suggest grabbing a bottle and test the % used (or looking at the notes section of an average % used) then working out if it is in fact more economical.

Vaporworld most likely gets their flavoring/concentrates from overseas, to be able to offer such low pricing.

I had an email exchange with the Xi’an Corp. a while back concerning their product. Below was the price sheet which was offered to me, a single individual purchaser… just imagine what price they offer for bulk shipment clients.

I would hazard to say that all of ECX’s house concentrates are from a vendor such as Xi’an “Blah Blah” Co. Ltd. 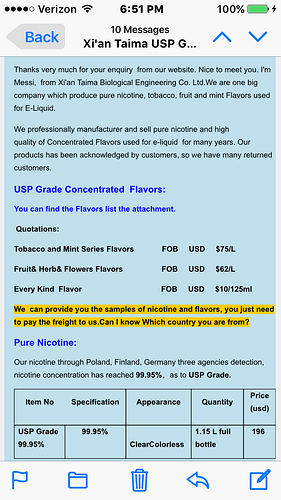 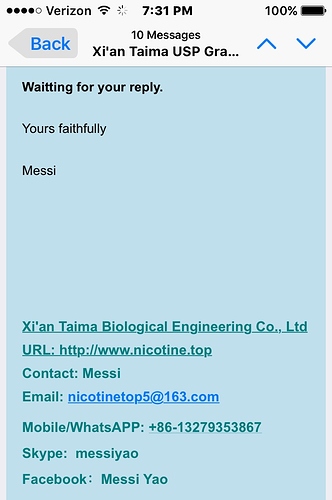 Now, with that being out there… a few folks here on ELR have ordered from “like” companies in China; can’t say I remember too many qualms with the quality of the product from overseas. Sure, you may have to use a bit more in the mix… but, the stuff is so damn inexpensive, it doesn’t hurt your bottom line that much, if you’re selling.

Yes good question here in canada tfa 120ml is around 13$
Maybe a bit of shopping around?

The price I’m currently paying for the flavors I’m talking about are $3.30 for 30ml or about 1oz. Multiply that times 4 to get the price I screwed up on,lol. My bad on that. Should have been around $14 for TFA and $9.99 for VaporWorld flavor. I agree that it’s better to use less of a more expensive but fuller flavor than trying to go the cheap route.

Thanks to everyone who has replied! Your comments have really helped!