I have just had a really bad experience with http://signaturetips.com/
I made a small order that promised Fedex shipping before I paid. 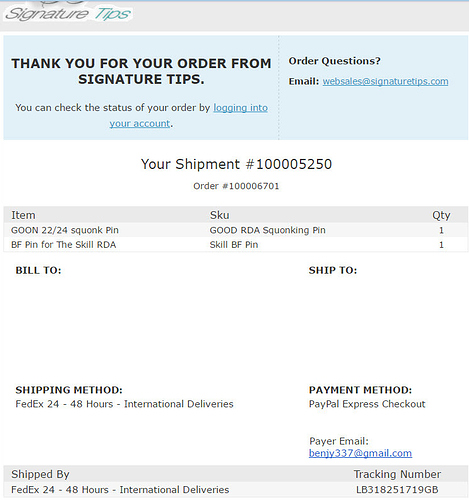 Sig.jpg745×793 118 KB
Once I’d paid I received an email telling me my order had been shipped, but it included a regular mail tracking number.
When I contacted them to ask why that had happened, instead of apologizing, I was told"

email.jpg808×218 31.7 KB
Which as we all know is a blatant lie, Fedex is always quicker than regular international mail.
My response:

db.jpg814×177 58.1 KB
Eventually he promised me a £3 refund for the difference in shipping costs. The refund would have remained as his extra profit if I had not bothered to complain. A few days after his promise of a refund I hadn’t received it, so I asked him if he’d broken another promise.
His response was that he didn’t like my attitude and that he’s “switched off”

Report them to paypal aswell along with those screenshots

Good idea, just opened a case against him stating that I’m doing it only to protect others from suffering the same misrepresentation.

The refund would have remained as his extra profit if I had not bothered to complain.

Lots of companies bank on the fact of people not paying attention to actual charges on their bill. One of my biggest pet peeves is dealing with customer service reps like that. Cudos for catching it.

I’m pretty sure that it’s the owner who answered me, it’s not a big business, and that makes it even worse IMO.

Good point, and thanks for the heads up mate.

I wouldn’t have much of a problem with it if they’re honest about it when you mention it, I’d even let it go. But, once someone tries to bullshit me or they try to fob me off, well then that’s a different matter