I know this is not the proper place for this but I need to vent.
I was displaced from my employment in september of last year and have been living on nothing.
My wife fell ill and has been hospitalized for over a month after several visits to the ERs.

I took her to the ER, they said she had the flu and sent her home with tamiflu and nausea medicine without even swabbing her. A week later she nearly died because the tamiflu made her sick so back to ER. This time they swabbed her and said no flu and sent her to the main hospital with fever of unknown origin. When they hospitalized her They were quite kind and fed her and me in her room. After a week they released her and I took her home. The following week while at a visit to her PC doctor she suddenly fell Ill again and I took her back to the ER, she had cyanosis (hands were blue) and almost died. They had to put a CV access in her neck, and put her in a medium care unit where she was isolated in a room and no one even came to take her pulse. Later they told me she had almost died of kidney failure. during her week in the medium care unit they refused to give me meals saying they had stopped doing guest trays years prior. They transferred her after a week out of medium care onto a ward where she actually received better care. After a week there they sent her to a different hospital where she received even better care but it was a school, so everyone there was students.
After a week at the school of medicine the doctor said she was healed and to be released, he said he would call in prescriptions for antibiotics, pulled the IV lines and sent home instantly. But the doctor did not send in prescriptions and would not even answer or return my calls.
Sadly 1 week later I take her back to the ER with high fever and low blood pressure. Hospitalized again. I talked to food service and they agreed after hearing my plight to send a meal for me with hers. The meal lady did bring me 1 meal and promptly said they did not give guest trays, that was the last meal they gave me. every time I would return to the room with my meal I would find the doctor had just left, so I was effectively shut off from her doctor. Even though each day they brought extra meals and have to dispose of them at the end of the day. This is not about me wanting a free meal, it’s about them separating me from my wife and the doctors, my wife and I have eaten every meal together for the last 16 years and some egomaniac meal lady has us eating separately.
Furthermore this close to me getting my 1st SSI check on april 20 and I’ve been forced to spend bill money to run to the house so I can eat.
so far her diagnosis is:
Chronic meningitis of unknown type
EBV
and I’m almost certain both were contracted in the hospital or ER and is not her actual problem.
I am still waiting to hear further test results on monday.
Tonight is the first night I came home instead of sleeping on their broken recliner in a week. I truly feel if I had not been with her the entire time she would not have gotten any care and would have died in their care. I came home to rest but lay in bed thinking of all our mistreatments and can’t sleep so I guess I’ll pack a meal and go back to the hospital. It’s a bitch posting from my cell phone so may not respond here till next week. I’m confused right now I may need to try to sleep some before I go.
Please pray for my wife, that may be her only hope with the care she is getting.

Please pray for my wife, that may be her only hope with the care she is getting

My thought’s and prayers go out to y’all. I truly hope and pray everything gets better soon , try and stay positive and please keep us informed.

Damn, that sounds every bit as bad our British NHS.
Warm thoughts and prayers going out for both of you. and I am also praying that you manage to cling to your internet conection.
Stay strong!
(P.S. Please .excuse mis-post earlier, I repled to Boy_Howdy accidentally.

I’ll try, difficult on a cell phone to post.
somehow i did manage to sleep some, going back to hospital now.

somehow I think this is much much worse than your hospitals could ever be.

I only hear about how bad US hospitals are but trust me when I say you don’t want to be in a British hospital. Unless you want to catch something ugly like one of the multiple antibiotic resistant infections. I’ve visited my brother in law when he had a heart operation. I’ve seen better hygiene and attention to patients (and this is no joke) in India.
No surprise if all the money flows straight into the pockets of the pharmaceutical industry. And no prayers will stop that.
If i ever have to go into a hospital and i can still crawl I’d rather go to any other European country.

MRSA is a killer and most in the health professions with direct care have it now in the U.S. My Aunt has been home a month after a month in the hospital. Barely 60, nurse all her life. MRSA, fungal infection at point of spinal. Had to remove 2 degenerative discs that won’t heal because of the MRSA.

Oh my goodness! I’m so sorry to hear all of this! I will say a prayer for you and your wife!
I’m curious which state u live in? I worked in the hospital in WI for years and its so sad to hear ur not happy with the care:frowning:

Attached is the medium care rounding log on the door of my wife’s room. They took her vitals once in a 24 hour period, and didn’t even bother to log it. 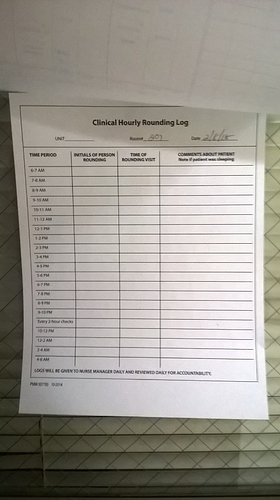 As a health professional, mind you in Australia, this sort of care is disgusting and makes my blood boil. It is a profession that requires care and compassion, but it’s a pity there are still bad eggs out there. That will not change no matter if it’s a teacher, a doctor or the garbo.
I wish you and your wife all the best, and remember positive thinking goes a long way and I hope the care that is received is more than what is deserved.

Please pray for my wife, that may be her only hope with the care she is getting.

I’m so sorry to hear about your wife and the horrible treatment she’s getting. Is your wife in a on base hospital over there ? Most importantly, I’ll be praying along with the rest of my family that your wife gets on the mend. And has a full recovery. I would when your able report to the (if on Military base) the charge Nurse for starters about the shi**y care she’s getting. If that doesn’t change go straight to the Hospital Administrator and demand something be done NOW !! If you haven’t already done so. Again I’m so sorry your wife is having to go thru so much uncalled for neglect. I can only imagine how you feel. In our Prayers,Thoughts & Positive Energy coming y’all’s way. Need anything we’re right here for y’all.

She must be in isolation for EBV? Speak up and talk to the supervisor and speak ur concerns there. He or she should be able to sit down with you and hear you out. Then explain and make needed changes. I would ask the nurse to see the supervisor of the unit shes on asap!
Also ask to talk to the case manager if she has one.

I’m not much of a religious guy but I’ll keep my fingers crossed for your wife and you and wish you both a speedy recovery.

Really amazing though that in a country where healthcare is by far the most expensive in the whole world, true good care is so hard to find

Prayers from here as well.

Wishing your family all the best. I know it’s tough, but hang in there man. I hope everithing would get better for your family.

Thanks @marsh8 my blood boiling too hence my venting.
Thanks @whosyourdaddy we are not on base just a public hospital, she is getting better, walking, no IV or O2, but my fear is she goes home and has yet another relapse. If I say the wrong thing to the staff she gets worse treatment, not better.
@Jazzy_girl she is not in isolation, and I do not have any of her symptoms even though we are stuck together as much as possible. She had a case manager but I guess they don’t work weekends. I noticed as I got aggravated the case manager name disappeared from the dry erase board.
thanks @anon28032772 and everyone for the well wishes and prayers. I am in a state that things can only get better at this point.

Sincere prayers and well wishes to you and your wife. So sorry to hear about your current tribulations Brother.

You and yours are in my prayers today.

Thats great news that shes getting better! I would still make sure to put your experience in writing and make sure the hospital is a ware of what happened for you. See people normally dont say anything but if everyone keeps quiet about things then it will NEVER change.
In order to get better people have to know what the problems are. If none are reported then they think things are great! Hope that helps and I’m very happy to hear your wife is mending.