I prefer to mix using a scale, I often find that I end up with an over filled bottle. I blamed it on a bad scale or me making a mistake. I recently bought a state of the art scale and the problem persisted. Today the light went on and I weighed up 10 mil of VG and the VG that I use is 0.6% lighter than what the recipe displays. Is there a way to adjust this in the application?

0.6% difference in your VG? negligible… don’t worry about it

Personally I have some 30ml bottles, that can only just take 30ml, not 30.0001ml without overflowing.
To avoid overflow, I just make 29ml batches when using those bottles.

I have found that some bottles hold less than the stated amount. I typically set my values a few ml less than the bottle should hold such as 57lm in a 60ml bottle

Thank you all for the feedback.

Yup. Some 15/30 ml bottles are 30 to the very top and some are to the top just below’ish the threads…,depending on the quality of the glass.

Personally I have some 30ml bottles, that can only just take 30ml, not 30.0001ml without overflowing.

To avoid overflow, I just make 29ml batches when using those bottles.

Those may actually be 1oz bottles instead of 30ml bottles.
1oz is about 28ml

I have a few bottles like that and guess what, they all come from US brand e-liquids that were incorrectly sold as 30ml bottles.
All my 30ml bottles from Europe are all 30ml with room to spare. 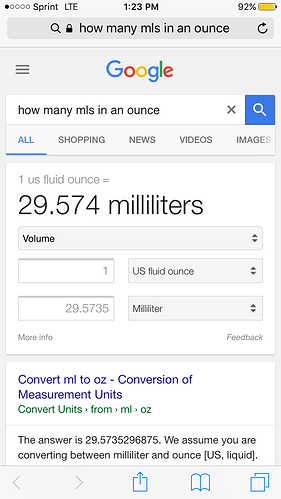 In any case, I had a couple of Suicide bunny bottles, when I mix a 28ml recipe, they look about the same as my 30mls in my other bottles.
That’s why I thought this imperial fluid ounce was what it was.

You guys are very confusing with all those imperial measurements

Those may actually be 1oz bottles instead of 30ml bottles.
1oz is about 28ml

Anything is possible, but I live in Europe bought them from a local site where they were advertised as 30ml bottles, and they can hold 30ml, just not many drops more.

I also have some other bottles, sold as large 30ml bottles, that can actually hold about 35ml.

Yeah, I’m not complaining about it.
Just have to remember to change the target size when mixing … which I have forgotten a couple of times, with the predicted result

I programmed my recipe calculator to default to 13.85ml when using standard 15ml glass. That leaves just enough space at the top for shaking. And occasionally with some recipes it still gets too close, so what I’ve done is squeeze the dropper bulb then let it suck up a little volume while capping. Otherwise the dropper displaces liquid as it’s inserted.
For 30ml I just set the target volume to 29.