i am stuck in a predicament. i dont have PG and its too darn expensive where i am … and i have tried to order it but no one ships to Baghdad. any-who. i see lots of folk getting away with just vg and are ok with it. for me though i can make a simple mix of
10mil =
8vg +
.5 mil strawberry +
.5 mil banana +
1 mil milk.

when i smell it after steeping for a whole day it seems wonderful out of the bottle. but when i apply heat to it on my RDA its … yucky. do i need to get PG in there or am i doing something wrong?

Your problem here is NOT a lack of PG… its a very common practice to vape max VG (ie… VG, flavoring & nic with no PG). My experience with this is that it doesnt change the flavor as such, but it does mute it a little.
As far as your recipe goes, banana & strawb should work together ok but I cant comment on the milk - never used it, & ive got no idea what it would do to the mix (but I wouldnt imagine it would = yuck).
I did read a little of the thread you put up the other day. Based on that, & the fact that your prob is definitely not a lack of PG, I’d suggest your problem lies with either the cotton you’re using - if its not organic it more than likely contains chemical residues - they would = yuck, or its the quality of your VG, or its the quality of your flavoring.
It’s a real shit that no one ships to Baghdad - I realize you can only use what is available, so I’d probably start by trying to fix the potential cotton issue. Boil it - boil the crap out of it… then change the water & do it again, then dry it well, very well in the sun. if the problem persists then its more than likely either the VG or the flavoring (or both), in which case, perhaps I’d be getting quietly creative & looking for someone to bribe …but before you go jeopardizing your freedom for the sake of a vape, I’ll ask my suppliers over here if they’ll ship to Baghdad - I’m in Australia & maybe there’s someone here who’ll do it. Leave it with me for a few hours (keep ur fingers X’ed but dont get ur hopes up) & I’ll see what I can do.

thanks … much appreciated. i have asked many shops to ship to me but the issue is i can only do DHL, FedEx or TNT shipping. preferably the last two due to DHL having a scary restriction on customs restricting e-cigs.

Ok… the question has been asked. I’ll be back when I get an answer.

What exactly do you mean by yucky? Like a chemical yucky? cardboard yucky? Weak flavor yucky? Cat’s ass yucky? lol
I am a Max VG guy myself and I have vaped mixes as low as 5% and I get awesome flavor! IF it isn’t a wick/cotton issue then it may just be your flavorings (I think we discussed this in your previous thread)
Have you tried making a single flavor mix? I would start there and eliminate as many possibilities as possible first. As grueling of a task that may be, it will be a lot easy to pin point which flavor is giving you "yuckies"
From your way of doing the recipe, that’s 20% flavoring which should be more than enough to taste.

Being unfamiliar with your exact type of flavors, it is hard to really say. It could just be that milk flavor too. Unfortunately how they smell in the bottle, doesn’t translate to how they will vape. For the most part, it will always smell nice in the bottle because these are concentrated flavorings.

We need to get you vaping already!! Haha

ya. i am getting sooooo tired of trying to make it work. the whole vaping thing. i have ordered a ipv3li when my bro visited from the US and its just sitting here. starting at me.
i cant use the darned thing cause of the whole ejuice drama.

yes. cardboard yucky. like i said it smells ok in the bottle but once its heated by coils its changing flavor.

You could try mixing in a little distilled water - like 1-5% that would thin the VG and lower it’s boiling point a bit - Perhaps you’ll get a better vape?

It could be the quality of the flavors or the vg. I mix max vg and never have any yucky juices unless I screw up on a recipe lol.

I saw where you were saying your flavoring was a food quality flavoring that may be the part that isn’t cutting it in your recipe. I have used food based flavors in the past when I first started and while they’re not that bad they’re not that great either and when you increase the percentage used it seemed to make matters worse.

Is there a pharmacy that you can look into what type of vg that’s available near you ? I see your in a predicament with getting supplies. If you can find VG at a pharmacy and it states USP grade then you can at least try it up against your current VG ? But you Do Not have to use PG ever. 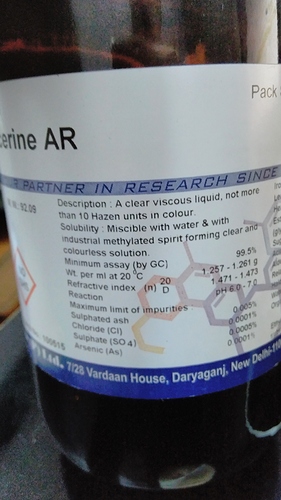 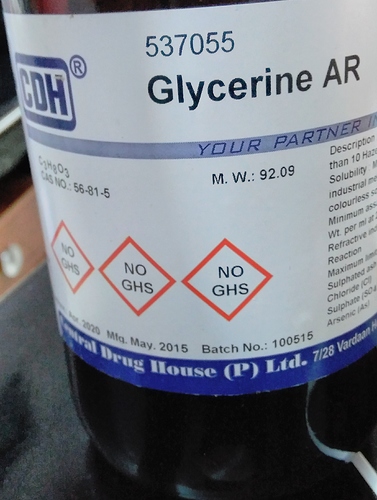 If what you are using is suspect, ill send you some legit stuff…lemme know.
Its all good…

The Glycerine AR is not necessarily the Same as we’re using it is a pure Vg but from what I have been reading it is not USP grade. ( USP Is Best practice ) It stands for analytical reagent. I do not know 100% the full difference I believe it has something to do with filtration process.

i thought this was good stuff. 99.5 purity says on the label

Hi there i have managed to get my hands on some AR grade Glycerin and Propylene Glycol from a chemical and lab equipment Supplier... does anyone know...

I see that it is still a pure product but it does allow for other reagents in the mixture of the glycerin whatever the company ( looks like different companies put different reagents in their products ) USP is the purest and is considered safe.

I read that link as well , but we’re trying to figure out what taste " yucky " to you. If may indeed be the glycerin you’ve got ?

Did you vape the glycerin on it’s own yet ? You could thin it with 0.5- 1% distilled water and just taste it alone and see if you get the funky taste? I like the vg I use it is semi-sweet all on it’s own.

i have another vg that is supposed to be pure and he gave me 1 liter from a barrel. literally. it was made in united arab emirates. i didnt use it lol. too freaked out he poured it from a barrel.

I would be too.

Ok @aalmosawi1, the 2 suppliers I approached have gotten back to me. Here are their responses…

Hi Peter,
Whilst we haven’t shipped to Iraq yet I’m more than happy to
give it a shot. AusPost gives us the option so I can’t see why it would be a
problem. I’m guessing it’d take at least the estimated 10 business days
(possibly more) but by all means we’re happy to try.

Although I would prefer not to, we technically could… but the shipping would be around
the $30 AUD mark for up to a kg. 3 - 9 working days

The biggest risk is the parcel getting lost, and then we are out of pocket

I took a guess & suggested to Morris that you’d probably be in a position to pay up-front (but frankly, I dont know what exactly he’s on about here - how else does it work online?), but havent heard back from him yet.
So for now, you at least have 1 good option. The only thing is paying the freight …& then crossing your fingers that it doesnt get nabbed by customs. But hey, theres the possibility of 1st class VG, PG, cotton & flavor. VAPIN’!!
If you go this route, I’d suggest emailing them first. mention my name (Peter) to Tom or Morris & they’ll know who you are - tell them you’re my friend in Baghdad . Good luck buddy!

this is the stuf thats avaialbe to me in the local market … chinese of course. and one flavour. i thought of buying like strawberry and banana and mixing them. maybe an option. but its chinese crap. i guess i have no choice. 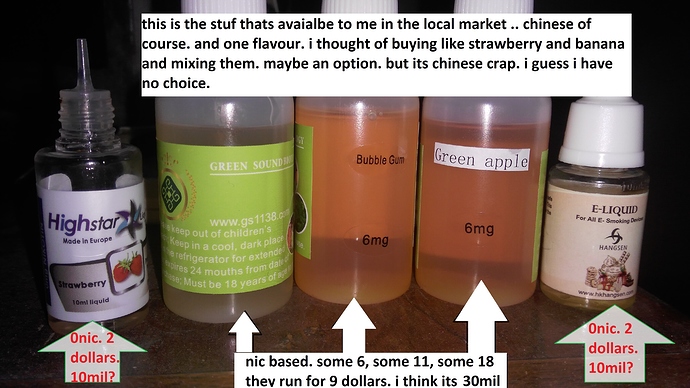 brilliant. thank you so much! i pay via paypal … no issues there. but i still would like feedback on the above chinese bottles i posted.

There’s nothing wrong with the Hangsen (if it really is Hangsen) except that it doesnt contain nic (or, doesnt appear to), if you want nic that is. It looks like a flavor concentrate that you’d need to ad VG PG & nic to.
The 3 large bottles appear to be pre-mixed - there should be no need to mix vg or pg with them (except to alter the dilution if the nic content is too high, which would obviously weaken the flavor) I cant comment on their quality. The highstar also appears to be a concentrate - other than that, I know nothing about it.
In the meantime, I suggest you boil your cotton till you can get some good stuff. Cheers, vT.