Disclaimer: This product was provided by Voopoo Tech for the purpose of a review. The upcoming review is my own personal and honest opinion, based on my experience with the product and it’s performance. Let’s get started.

Even though I received the full kit, today’s focus will be on the mod itself. I will post a separate review and comparison of the Uforce sub ohm tanks (v1/v2 & t1) released by Voopoo - Stay tuned. 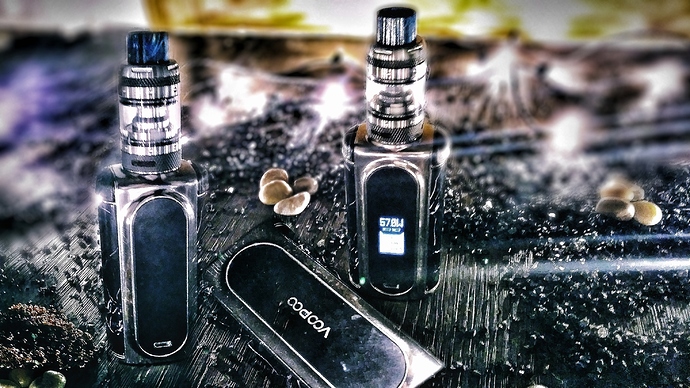 The VMATE is advertised as a light weight mod, and after taking it out of the box I was surprised and disappointed at the same time. The shape is great and it’s not just a box, it’s comfortable in my hand and definitely much more ergonomic. At first glance this device could be put into the expensive or high end category, but that’s where the disappointment sets in. Since the VMATE is made out of zinc alloy and what appears to be plastic (battery doors, buttons) , holding the mod gives off the feel of being cheaply made or flimsy. 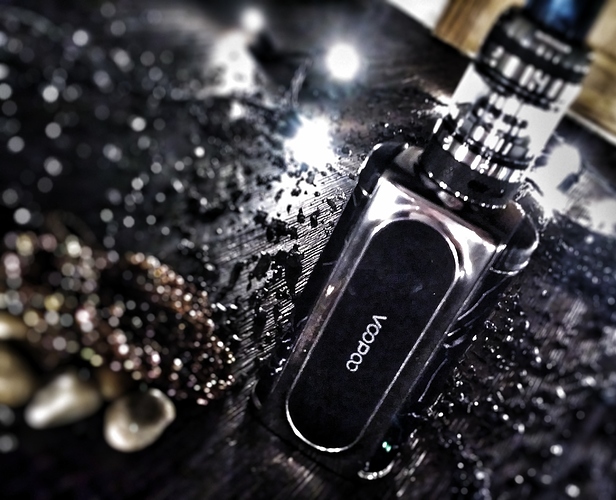 I was afraid that the surface of the mod would be easily scratched or scraped, due to this polished or mirrored finish, but it held up well and there was little to worry about. However, the whole device is a fingerprint magnet, at least with the silver frame version.

The battery compartment is a bit different with the VMATE, (picture below) the device does not open at the bottom or the top, but rather to the left and right. The batteries are placed beneath the decorative side panels. Both panels have a little groove on the outer edge, making opening this compartment very easy. These are held in place with a small magnet at the top. On the inside of the panels you’ll find a “R”/ “L” marker, this indicates what panel goes on which side, and inside the battery compartment you’ll find a “+” / “-” sign. Insert your batteries and then close the panels. 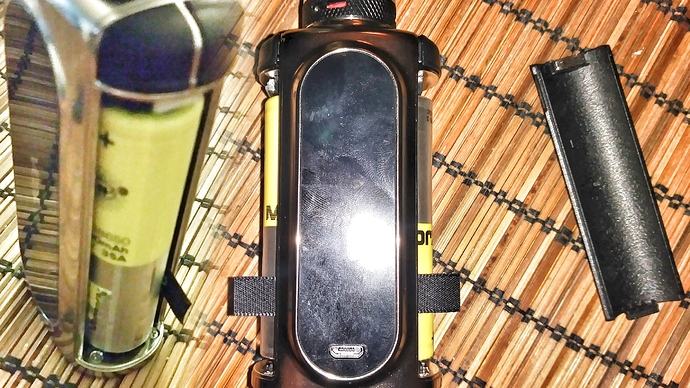 The up and down button, as well as the fire button are located at the top, but off to the side of the device, right above the battery panels, easy accessible with either your thumb or your index finger, depending if you’re right or left handed. Buttons are firm and clicky. 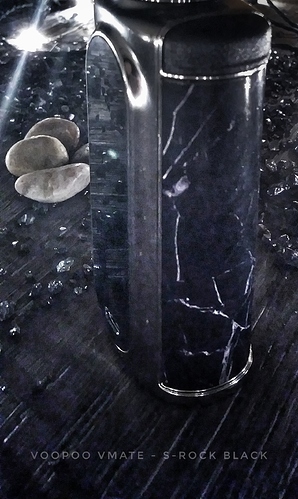 Spring loaded 510 and centered. The dimensions of the mod are 89 * 74 * 30mm, but as shown on the picture above, there’s this little pedestal right around the 510. With this, only atomizers up to 25mm will fit comfortably and without any noticeable overhang. Anything above leads to overhang and in some cases might even interfere with buttons.

I enjoy vape gear with decent or very well made gimmicks, and always the first person to get excited about that. The VMATE being advertised as light weight mod is one thing, but claiming that it’s actually only 100g, was something I needed to see for myself.

So this shouldn’t come as a surprise, I took the VMATE and placed it without batteries on one of my scales. As a diy’er I have plenty of scales around the house. But what kind of comparison would that be if I go only by the weight of the vmate.

To make this fair, I took one of voopoo’s older mods, the drag and placed it on the scale right next to it, also without batteries. I wanted to show the difference of a device advertised as light weight vs a regular device.

Here’s a picture of both products on a scale, batteries are not included. 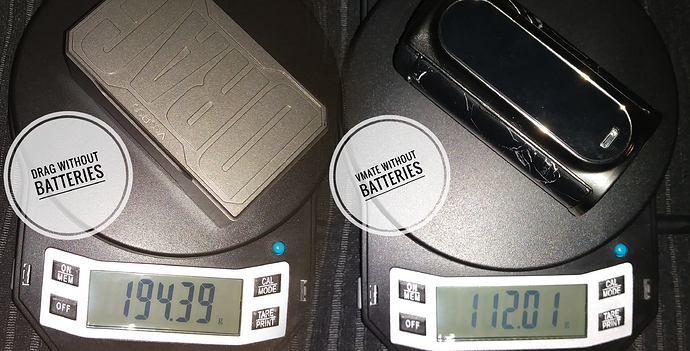 Just for informational purposes, I placed 2x18650 batteries inside the mods and put them back on the scale. (picture below)

With this out of the way, let’s take a look at the specifications listed by the manufacturer:

One feature I love with all voopoo products is the wattage recommendation. It’s in my opinion extremely beginner friendly and easy to operate. Every time a new atomizer is connected and falls into the supported resistance range, the vmate will recommend a wattage based on ohm. This is just a suggestion and can be changed at any time, but for beginners and veterans alike, this is a good starting base without any hassle.

The menu is simplistic and not overly crowded. The font is in the medium range, not too small and not too big. The display is not too dark and not too light, even readable in sunlight or late at night without other light sources around. These options are not adjustable via the mod’s menu. 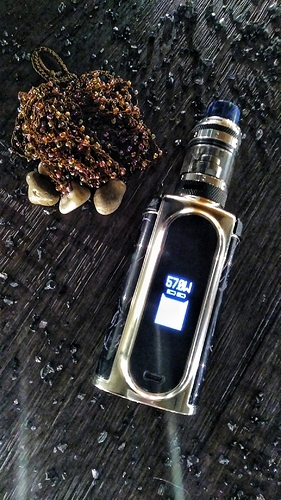 With just 5 clicks of the fire button, the mod will turn on/off, another 3 rapid clicks opens up the modes for either wattage (set by default as main) or temperature mode (available for SS, TI, NI). After having selected the desired mode, pressing the fire button quickly 4 more times, makes the secondary attributes select able and adjustable, such as wattage in tc mode. To exit the selection press the fire button once and your settings will be applied.

Holding down the “up and down” button to the same time, opens the second menu, this menu includes serial number (gene chip), version number (software/firmware), memory slots (1-5), Lock and Unlock and the wattage mode.

The lock and unlock feature can also be accessed by pressing simultaneously the up + fire button.

When the device is locked changes to the wattage/temperature can not be made and the mod will not fire. This mode is not a display lock, but rather a full device lock for situations such as placing it inside a backpack, pocket, glove box etc.

The ramp up of the device is nearly instant, there’s not much delay when pressing the fire button, and in my opinion, the vmate does hit much harder in comparison to other brands. Even when compared to their own but older products.

The only time I felt it’s lacking speed is the sleep mode. After the vmate enters the sleep mode (not being used for 30 minutes), the first hit you want to take will have a delay, it’s not bad but if somebody wants to avoid that, just click any button once and the device will wake up, then continue with vaping. Other then that, I’ve never experienced any issues with the wattage/power mode.

Since the VMATE includes the upgraded version of the regular gene chip, gene.fan, I decided to give temperature mode another chance, since I enjoy tc much more then wattage.

Unfortunately, there’s not much noticeable change and TC is still disappointing, because of one restriction. The VMATE still doesn’t allow more then 80W in temperature mode, and that is not an issue for me personally, I vape single coil at lower wattage and thinner stainless steel wire. But for people that use dual coil, thicker/beefier builds, this might be an issue. That’s why I am mentioning this right from the start.

However, if somebody can tolerate this limitation and is one of the people able to vape at lower wattage and enjoys temperature mode very much, or would like to try it, the vmate is definitely one of the mods that are more in the budget friendly category and actually performing very well in temperature mode. Maybe not as accurate as an expensive DNA or YiHi device, but in comparison to other products in the same price range, the VMATE is a force to be reckoned with.

Affordable mod and tank kit at a very high standard of performance
Upgraded Gene chip(Gene.fan)
Aerodynamic shape with high gloss finish
Battery efficiency
Decorative battery doors, that maybe one day can be purchased separately and will help with mixing and matching ;), as of right now this option is not available. You get what you buy, but it’s still nice looking doors.
Light weight

All of these cons are based on aesthetic and personal preference, because there’s not much else I could have pointed out that would be a negative. It’s a high performing device without any hassle or problems I’ve encountered.

As of the time of this review, the VMATE is on pre order status, and should be officially available by the middle of September. There will be 9 colors available for the pewter frame and 7 for the silver frame. If you’re interested in the mod or the full kit, head on over to Voopoo’s official site (link) and take a look, or feel free to browse the internet and see who will sell it first

Thank you for reading.

Great review! Thanks for sharing.

Thanx. Nice review, @eStorm. I wasn’t even aware this was coming out soon. But for a mod boasting 200w and dual 18650’s I don’t understand the 80w cap in TC mode. It’s not like it has flashing lights and bling and shit that taps battery power. Might make sense to someone else, but wtf?

Thank you @TheTinMan, @SmilingOgre, @TorturedZen and @Mix_and_Hope for the feed back, much appreciated and thank you for reading the review

Oh my stars! That was phenomenal! Very straight forward. It kept me interested from start to finish. I hope you can put this review in other places so it can be more widely appreciated!

Great review. Love the looks of this device. Sucks about the TC restriction, but it still seems like a great device. Cheers!

Great review @eStorm
Been looking forward for a review on this since I first seen it.

Nice review, I wasn’t even aware that VooPoo was coming out with this mod.

And I agree, why they still have this 80w restriction in TC mode, is a bit of a mystery to me. Personally I vape in TC mode but below 80w so it would not be a problem for me, but it still annoys me that there is this restriction.

Great review on a sharp looking mod, gotta a chance to see them all at a vape convention and walked away impressed. Wasn’t aware that they still have the 80W limit in TC, that is just dumb but for 75% of my TC builds it probably wouldn’t be a problem.

Thank you @madecat_vapes, @jhmiller, @IzNoGoat and @mjag for reading the review and the feedback. As I mentioned, for some people this TC limitation might not a big deal, but I personally hate restrictions, that’s why I made sure it’s pointed out lol. I am happy it was helpful for you guys.

@Laura5 Thank you so much for all these kind words, to be honest it meant a lot and made me quite emotional. I won’t forget it

Sorry I’m late to the party… Great review Storm!! Thanks for the good read…

That’s TWO great reviews back to back @eStorm. As always, I appreciate the candor about the TC, and always nice to know AHEAD of time, just in case it was a deal breaker. Your other cons are also spot on.

@Eddiepraysforpeace, nobody is ever late, it’s not a event or marathon lol. Thank you Eddie and @SessionDrummer for leaving a comment, I can’t even put in words how much I appreciate all of you guys and the support.

@eStorm Your review was straight forward to the point. you didn’t have any flash or unnecessary information. I loved it thanks for the hard work.

@eStorm Your review was straight forward to the point. you didn’t have any flash or unnecessary information.

Great review, it is a nice looking MOD.