I wanted to mix some recipes. On two flavor bottles which I didn’t use for several months I recognized some black stuff on the nozzle neck. I attached a photo.

These two flavors are Cake Batter and Bavarian Cream. Both flavors are from Capella. Both are in 30ml bottles. Bought from a well known flavor shop in the UK.

Can someone explain what happened?

The black stuff is kinda hard. I was able to move it with a tweezer. The flavors itself didn’t change the color. They also don’t smell fancy.

The flavors were stored in a dark, cool place.

I have about 80 flavors. Some of them are older. But didn’t saw something like this before. 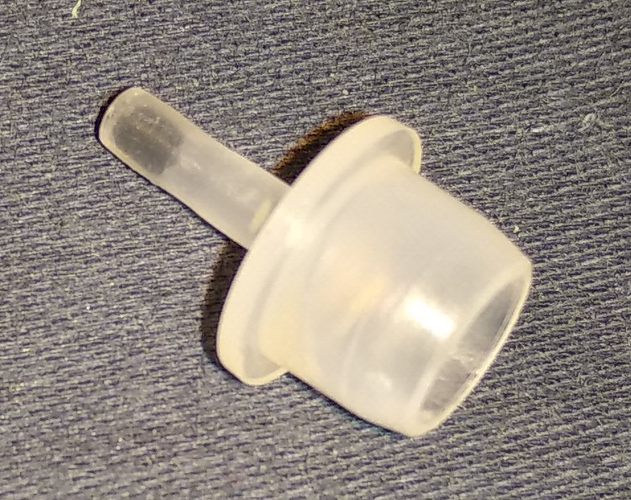 From poking around a bit (not a comprehensive study), it may be that (among types of molds that appear black-colored, at least on their outside surfaces when inspected), certain strains of Apsergillus (of which there are many) might possibly be the more likely kinds of molds to form in such an environment described:

Aspergillus niger is a fungus and one of the most common species of the genus Aspergillus.

It causes a disease called “black mold” on certain fruits and vegetables such as grapes, apricots, onions, and peanuts, and is a common contaminant of food. It is ubiquitous in soil and is commonly reported from indoor environments, where its black colonies can be confused with those of Stachybotrys (species of which have also been called “black mold”) …

… Aspergillus niger is included in Aspergillus subgenus Circumdati , section Nigri . The section Nigri includes 15 related black-spored species that may be confused with A. niger, including A. tubingensis, A. foetidus, A. carbonarius, and A. awamori.

Aspergillus niger is incredibly prolific thanks to the fact that it can grow on a large variety of substances; indeed, most experts believe that Aspergillus niger is the most common form of Aspergillus in the world. Aspergillus niger has even been found in environments where there are few nutrients present. It is one of the most frequently-identified sources of “black mold”. Aspergillus niger is black in color, with a white or yellow layer beneath its surface, in indoor environments owing to its ability to flourish on damp walls and other surfaces. (It is not, however, the most dangerous of the infamous toxic black molds; that title belongs to the even more poisonous Stachybotrys chartarum).

Though it is the most common household mold of concern, it is only the third most likely out of all types of Aspergillus to infect humans. However, that said, Aspergillus niger still leads to a significant number of serious infections each year. It is capable of forming fungal ball in the lungs of humans (like a handful of other varieties of Aspergillus) which continues to grow over time, causing a range of uncomfortable and dangerous symptoms.

Hard to tell, but it looks like (perhaps) gunk has formed on one inner side of the spout only ? Or all around ? 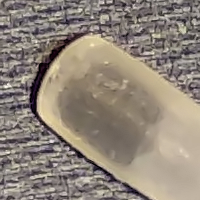 Why is the bottle nozzle so scratched up? My juice refill bottles get scars on the nozzle but I’ve never had to remove or push a flavor bottle nozzle onto a tight spot to cause nicks and scratches. Have you been removing the nozzle? Just curious if that could possibly be a contributor. Biting it or laying it on contaminated surfaces. I have to admit that I’m pretty careless handling my refill bottles. I am going to adopt better handling practices after seeing that picture and reading @Raven-Knightly post above. Especially with all of the current lung illnesses I’m reading about.

Shouldn’t the pg and/or alcohol prevent mold? I would think it’s just some partially dried out concentrate.

As far as suspension of the extracts in PG and/or VG is concerned, PG is an ingredient that is used when storing and culturing AF. Even more common appears to be VG, which is used extensively in solutions for storage of AF and combined with Glucose when culturing AF. … not “bullish” on glycols as protective.

… some growers have claimed to have some success against mold on tobacco by making direct, undiluted applications of various alcohols, primarily denatured ethyl alcohol (ethanol) …

The scratches came when I put a tweezer into it. I wanted to find out about if it’s soft or hard. It’s relative hard. Almost like the plastic by itself.

In this case it’s a flavor bottle which I don’t reuse. Well, I reuse some of them for high concentrated nicotine.

If this is mold, then every bottle can be affected. Only beggars I don’t see something black in other bottles doesn’t mean they are clean.

The questions are : is the flavor in the bottle contaminated? Dangerous for the health? How to avoid it in the future?

It seems the outer side is clean. From picking a tweezer in it it might be similar to hard rubber in its consitiy. I could cut the piece of plastic and take it out.

So (you mean) the stuff only formed on one (inner-side) portion of the spout (?) - or formed all around the circumference of the inner surface (possibly later perturbed by contact with probing tweezers) ? Curious.

Am looking around at bacteria - which can appear black. One example of that is this (free stock) image:
https://avopix.com/premium-photo/475322866-shutterstock-colonies-of-black-bacteria-culture-on

(Maybe), the tough structure (might) be spores (of some sort) formed into a sort of “amalgam”, waiting to be re-exposed to possible nutrients existing in the e-juice in the plastic bottle ? Now reading your post below …

No, the only time I used tweezers on that part was yesterday. Never before.

The black staff is quite solid. I was able to move it around a few millimeters with the tweezer.

Kind of sounds like (something) microbial ? Other than that, crystallized components from the e-juice in the plastic bottle ? Eliminate that possibility, and I myself might guess “microbes”. Even knowing the offender, prevention and detection (short of notable evidence) may be challenging, or not feasible. Various critters (particularly mold type fungi) can be really tenacious. Storing liquids in refrigerator will generally slow growing things down a bit. Filtering down to ~2.5 Microns (using a 1.5 Micron acceptance-size filter) can remove (I think, critters and) spores (including the most dangerous, Aspergillus Fumigatis). I do just that with NETs.

Anyway, maybe it’s all “just fine”. (Of course), that is just the kind of thing that all might like to hear. Dunno.

The old “use glass rather than plastic” container preference may be helpful (especially if at room temps).

Here is a kind of interesting web-page discussing an array of various “Airborne Microorganisms” just found. Spores (including Aspergillus Fumigatus) are said to be able to survive pyrolysis temps during combustion.

just throw it out buy a big rubber or tupperware keep your flavors in the fridge?
Or have a dedicated mini-fridge for flavors?
Thats what I do never seen anything like that before

I asked the shop where I buy all my flavors. Chefsflavours.co.uk
I asked if I may post the answer in this forum. The answer was yes.

If these concentrates are quite old it may just been were they have sat unused for a long amount of time and some residue has been left in the nib.

*This should be harmless and should still be usable once this black part has been removed. *

I would check the remainder of the juice and if anything looks suspect we would suggest not to use these.

I checked other bottles and all of them have some concentrate left in the nib. But no black stuff.

*This should be harmless and should still be usable once this black part has been removed. *

That may be, but if one of my bottles grew a pebble, I wouldn’t just poke it out and continue using it. That’s how penicillin was discovered, wasn’t it? Someone’s vape juice sat too long?

I had it before but my cap was black and turned out to be a piece of the cap like a nipple that was left on the cap and broke off inside the nozzle tip but mine was hard so yes that was my case just wanted to share it with all.

Hmm… 4 years of vaping and I’ve never had a bottle get funky like that. Neither vendor nor DIY, regardless of storage conditions (ones that fall out of favor are typically shelved forever in the storage room until I finally toss them). Heck, I found one on its’ side on the concrete floor of my basement that had to be there abandoned for years, and while it was certainly darkened, there was nothing growing on or in it. That just sounds like something I personally wouldn’t trust vaping.

I took the two black things out of the nib. They are like plastic. I burnt one of those with a storm lighter. It melted immediately and disappeared, and smells very strong as Cake Batter. Wouldn’t it have a weird smell if it’s mold?

Unfortunately I lost the other black whatever. Wanted to see if it is soluble in hot water.

Edit: I found the other one. It’s not water soluble. Then I burnt it. It smelled like plastic. Not more not less.

This has happened to me at least 6 times over the last 2.5 years. However, a couple of times the plug was white. The plugs are hard with the consistency of plastic. I never dissected one, but I will the next time it happens. It has happened at least 3 times with the same bottle, TPA Caramel Original. I never used much of it and it was probably months between each use. I did use it a couple of times, including the other flavors, and never seemed to suffer any ill effects. It was tossed eventually. I thought it was either too much sugar and/or some type of separation going on.

I’ll be sure to note down the flavor if it happens again.

“This should be harmless and should still be usable once this black part has been removed.”

Probably a wiser choice than, “We’ve got no idea regarding what you are seeing - but be assured that our company will gladly assume and embrace full civil liability for all related torts, proximal and collateral.” …