Whilst I wait for wire, coils and tweezers (to bring the stock coils closer), I’ve heard that you can use the baby cloud beast on the Teslacigs 3 150w box mod. My baby beast has a prebuilt coil of 0.15 ohms. I’ve read that the Tesla 3 150w is a semi or half mech (it’s got some safety features built into it). Do you know if I can use the baby beast with this mod? 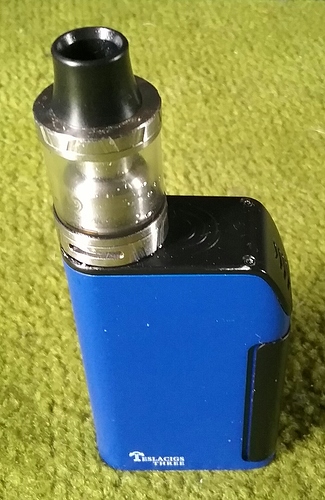 sure w/ right batts in it. Did u just get it?

I got it months ago and didn’t know how to stop it from leaking (now I know to close the airflow when filling). Heck I knew nothing about vaping so I put it aside until now. It comes with a pre-installed battery (lipo I THINK).

Heck, when I first got it I never even had the coils installed for me and (without coils or wicking) just filled her up and fired her. To my dismay she leaked everywhere

Talk about a sad uneducated noob!!
Thanks for the reply. I’ll throw the baby beast on now & give her a whirl. Cheers worm

Its unreg mod so the wattage depends on the res. of the coils in the atty, if its to warm, u would have to get higher res. coils for the atty

Ahh, ok. Thanks for the education aye.
I thought that the Tesla 3 was unregulated but not a “true” mech mod as it has some safety features built into it. Would you agree?

right its protected in that it wont fire below.1 ohm. A true mech will fire anything u put on it and since batteries are stupid they will try to fire, even themselves .Battery safety is very important when it comes to them so best knowing a lot before u gamble w/ them.

Very true.
I’d just bought my 2nd regulated mod by the time I realized just how much of an important role that the batteries (type, output, etc.) play in vaping. My local vape store only stocks the samsung 25r, so I got some sony VTC4’s for my alien 220w running cloud beast tfv8.
I’ll have to give some thought as to what I’ll need when I get my gPriv running iJoy limitless plus. Mooch has helped me out, thank goodness.

There’s nothing wrong with the Samsung 25R batteries, I use them all the time.

That’s good to know. I’ve read that they’re quite a workhorse.
How suitable are they for say for use @ 120w on a cloud beast tfv8 using a 160w vaporesso tarot pro?

I use just about anything I feel like throwing on it, works fine with my builds down to 0.15 and up @louiesquared is correct it is a regulated device

Louie, thanks for clearing that up for me