What is Sucralose DH?

I’m looking at this recipe

but it calls for Sucralose DH

can’t find any info on it??

Any subs? I have TPA Sweetener Sucralose/Maltol TPA and Cap Super Sweet.

Sorry if this is a dumb question… lol I just haven’t seen this before.

Electronic cigarette liquids (e-liquids) with sweetener additives such as sucralose, a synthetic chlorinated disaccharide, are popular among some e-cigarette consumers; sucralose can be added either by the manufacturer or by the consumer. The prevalence of sucralose in commercial e-liquids is not known, nor is the typical concentration of sucralose when present; labels are not required to disclose ingredient information. Here, we report the effects of sucralose on e-liquid degradation upon e-cigarette vaping as studied using 1H NMR spectroscopy, ion chromatography, and gas chromatography coupled with detection by mass spectrometry or flame ionization detector. Sucralose was found to be subject to degradation when included in propylene glycol + glycerol based e-liquids and vaped; the presence of sucralose in the e-liquids also resulted in altered and enhanced solvent degradation. In particular, production of aldehydes (carbonyls) and hemiacetals (which have implications for health) was enhanced, as demonstrated by 1H NMR. The presence of sucralose at 0.03 mol % (0.14 wt %) in an e-liquid also resulted in production of potentially harmful organochlorine compounds and catalyzed the cyclization of aldehydes with solvents to acetals upon vaping; the presence of chloride in e-liquid aerosols was confirmed by ion chromatography. Quantities of sucralose as low as 0.05 mol % (0.24 wt %) in e-liquids lead to significant production of solvent degradation products.

There are whole threads devoted to sweeteners. It’s worth reading a bit about them, getting to know them with each their pros and cons 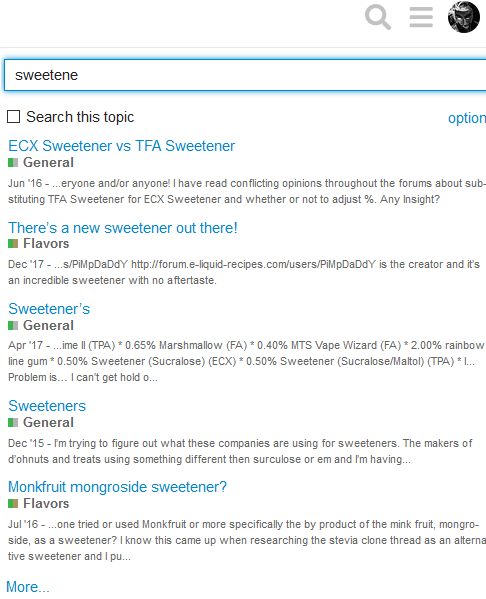 but it calls for Sucralose DH

can’t find any info on it??

@woftam is probably correct. The DH should appear as (DH) to designate the manufacturer. But as usual someone found the naming conventions too challenging.