I haven’t used my Luxotic MF pretty much since I got it. I haven’t had much luck finding any RDAs that were providing me any flavor except for the Profile. I just got a Profile RDTA from the classifieds, and after having the thing leak all over me for the 4th time I broke it down into its RDA version. I plonked it onto my Luxotic and after using it for less than 24 hours my Luxotic’s screen is doing THIS: 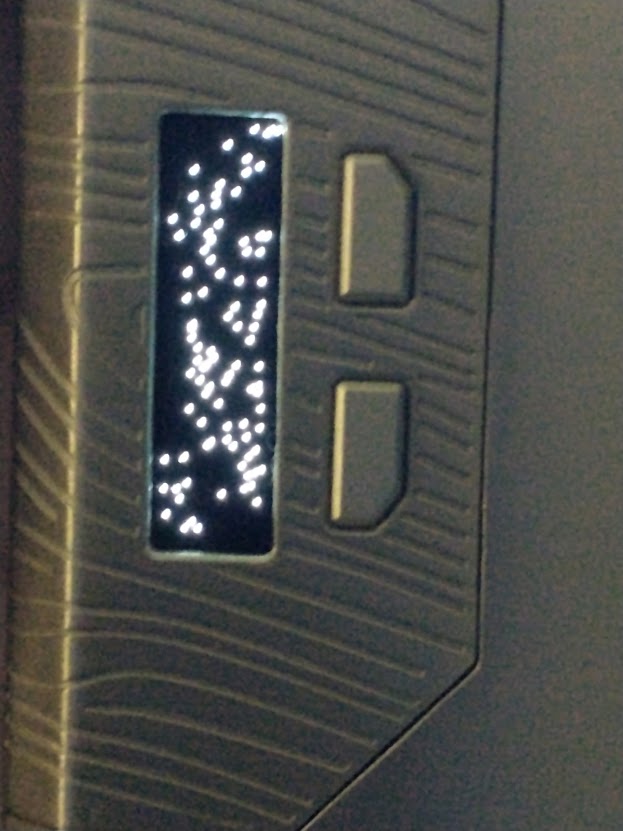 Ideas, anyone? I just saw that Element Vape is selling the Surface, which I remember trying to find someone selling ages ago. Should I bother getting it considering the luck, or lack thereof, I’m having w/ this Wismec product? Or should I pay the substantially higher amount and get the Dovpo Topside 90W? It’s def bigger, but its dimensions are on par w/ the Pulse v2, which I can use w/ a little shifting around in my hand.

Edit: I checked, it’s completely dry inside the battery compartment. I’ve tried 5 clicks to power off the device and no response - still that screen. I’ve removed the battery and put in a new one - the same thing.

Yay me! I can’t believe I can’t even turn the damned thing off! One minute I’m vaping, the next… aigh! (I’m so glad I find vaping so calming, right?)

IDK, do you have it in the Braille setting

I just noticed a note on EV - " Final Batch as the Topside 90W will be discontinued." Do I want to buy yet another soon to be obsolete mod? Should I just get lots of Pulse v2 mods?

checked, it’s completely dry inside the battery compartment. I’ve tried 5 clicks to power off the device and no response - still that screen. I’ve removed the battery and put in a new one - the same thing.

Most likely you got juice into the mod thru the 510 connector. You won’t see it in the battery compartment. It will show up in the screen.

Is there anything that can be done, or is it toast?

I’m pretty sure the Luxotic MF can be converted into a screenless version. I don’t know if that would make it semi-regulated or a mech or what. I’ve never used anything other than regulated.

Should I just get lots of Pulse v2 mods?

Get the Pulse. Buy a couple of bottles for it. Best purchase I made. It water resistant so condensation doesn’t enter the mod. Just don’t lay it on it side with the WOTFO on it without rubber pants on.

Yeah, can’t believe that damned Profile RDTA. I barely leaned it to its side when it emptied all over me. I’ve got 3 Brunhilde, which have the same setup, and can lay them on their sides all night and not a drop of condensation out of any of them. Well, I sure showed IT by turning it into a RDA, didn’t I?

I wish Wotofo would release more panels for the Pulse v2. I saw they were selling an identical squonk mod w/ the Requiem, I believe, with really nice-looking panels, but they’re still not selling any. I’ve only seen one person that does panels, and he’s in England.

Here’s what I was talking about: Pulse v2 in disguise

I own the Vandy Vape. Use it everywhere. Its a single 21700 that is lite enough to carry around and good on battery. Enough colors to suite you. You can find the mod only in the mid 40’s range havent had a leak in 7/8 months I have had it.You can get 2 for the WOTOFO kit. You already have the RDA’s. 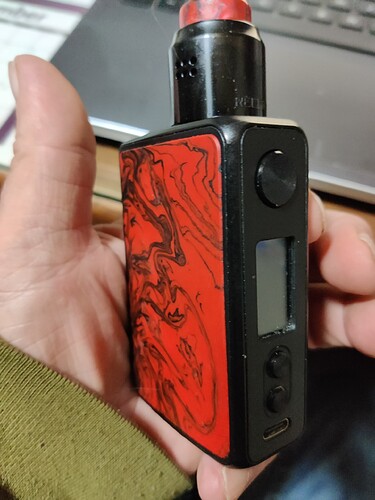 Yeah, I already have a red VV Pulse v2 like yours. I actually just got another one via the classifieds this week. Good thing, too, considering what just happened to the Luxotic MF!

Never did hear any suggestions about what to do about the Luxotic MF, apart from reading Braille or playing Asteroids.

Is it trash, or can it be saved w/ the conversion kit that comes with it?

Not much you can do with it beside put it in the circular file. Looks like the board shorted out. You can contact Wisemec for repair but in my thoughts I would spend the money on a new mod.

Completely unrelated, I have a Pico Squeeze 2 which has received almost as little use as the Luxotic MF. I’m tempted to sell it just because it’s so damned heavy. It’s seems to be solidly-built, but I’m afraid to take it outside of my apartment. It’s not very pocketable, just because of its weight. Any idea if there would be any demand for one of them?

The kit makes it screenless/non-regulated. Beyond that, I don’t know. As for tools, all that’s required is a small screwdriver. And I’ve managed to build a couple of computers, so I’d say I could manage swapping out the boards on a mod. Both Mike Vapes and DJLsb have videos where they show the conversion. It’s just been so long since I’ve seen the videos that I can’t remember what the mod converts into.

I guess I was kinda hoping the mod fairy would flitter down and tell me to stick a Q-tip in the 510 connector or put the mod in a bag of rice, something mundane like that. It’s apparent the current board is no good for anything other than imitating an old arcade game. (sigh)

Since I have no desire for a non-regulated mod, maybe someone will want it in its screenless version. EV is still selling them that way.

Watched a video on replacing the board. Looks simple. The board is regulated you just lose the display. Can’t see why you can’t do the repair.

Wouldn’t that be semi-regulated, I think the term is, since I wouldn’t be able to control the wattage? It would have the same protections (I think) as a regulated, just not the control, if I understand what a semi-regulated mod is.

If I’ve got that wrong, please let me know.

You won’t be able to control wattage or volts but the mod won’t be able exceed your batteries and harm yourself.
I still don’t understand how much damage there is.
does it still fire in it’s current state? If so it might not be the board and the display may be bad.
Does it 5 click on and off? if yes it’s most likely the display. That didn’t come with the kit. You can hunt down a display with postage whats the cost?

It doesn’t fire or turn on/off after 5 clicks. It just sits there with its bizarre-looking screen. One minute it was working, the next… not. Today was the first time I’ve used it for more than testing an RDA, which is why I’m so ticked off. This has got to be the shortest lifespan of any mod.