When do you taste test?

I do like the milk frothier myself, I got one of the cheapest ones I could find and it will still mix a max
vg mix for me, I also have stated doing a warm rice bath and my cream and fruit mixes have color in
them in about 12 hours or so. Seems to be working so far.

I don’t want to take the chance of degrading the nic at all. It’s too expensive. So, I don’t use heat. I just mix with a milk frother once and put it up in my ‘steeping’ cabinet. If it is a new recipe, I try to test at least every other day and take notes until it’s ‘done’.

I shake and let my new mix rest for 30 minutes, then I take a few puffs to check out if it is even worth steeping. If it tastes ok, I leave it for a week.

Get one of these and a beaker and you’re done.

As for initial tasting - use a ce4 or something small and then wash it out. If a juice tastes good in that it would be superb in anything better. In my experience if a juice doesn’t taste tolerably good straight off, no amount of time will really improve it. That’s just my opinion of course.

I bought a magnetic mixer and will never shake another bottle again. Its awesome.

Do u have a link?

Do you use heat or just the mixer? There are quite a few of those for sale on ebay.

I bought a small used one on ebay. I got mine for $30 and you have to be patient and watch for a deal. It doesn’t have heat and I didn’t want heat. I just give it time.

I don’t use heat either for disturbing the nic. But I hear about it all the time. I kinda want to try it. Just some thoughts I had that I haven’t come across yet for answers. Like how much heat can nic take before it degrades?
Or what about if we just make or mix with 0% nic then add the nic later after your done messing with it? That seems like the safe way to do it.

I thought of that too what @pingu is doing when I was making a bottle spinner to ease up on all the shaking if this would create a centrifugal thing. I don’t think it does (at least I hope not) after watching a real centrifuge. But you could be right about it separating also. A centrifuge holds a test tube still and spins the tube around like hands on a clock. The continuous g-force on the liquid pushing the heavy away from the light to the bottom. My bottle spinner doesn’t seem to be doing that. It creates a vortex much like you would see in a blender.

I typically set my mix in my little dipper crock pot for about 30 minutes just enough to loosen my vg. Then I put them in my homemade spinners for a while as to not introduce unnecessary bubbles/oxygen in the juice you fet from shaking. (My spinners are made from 2 small satellite style fans that I have stripped down and attached Rx bottles to the centers and its all attached to a table in my lab…I pulse a few times and then spin for ages saving my arms haha)
As for tasting I am extremely impatient so I usually do a quick taste after all that, adjust if necessary, then lock away in a box for at least 3 days or longer. I learned the hard way about cream and custards getting stronger with age…I kept adding more and more at first because I really couldn’t taste it and then weeks later it felt like I was sucking on a bottle of heavy cream!
This is the only thing I hate about DIY is the waiting! I think a majority of it has to do with the fact I am a chef and I’m not used to creating something and then waiting half a month to taste it! I am becoming more patient as time goes by though

Oops sorry about the novel hehe
I just forgot to mention that the whole dripping thing doesn’t really work for me. I bought some mini protanks that I use for tasting and I love them! I picked them up for only $6 each and for me they give a more accurate taste of what my juice will taste like in my tanks. The protanks only take a couple minutes to wash inbetween recipes and I currently have 7 of them so I can work on 7 different mixes simultaneously

This is the only thing I hate about DIY is the waiting!

Try brewing beer… talk about waiting! My wife still complains about the carboys and gear I have “taking up space” in the basement since I stopped. 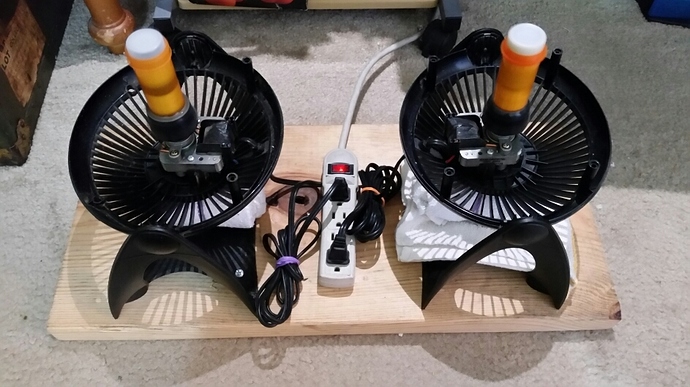 This is my homemade (obviously) spinner that I use…I will never go back to shaking like a mad man!

So I realize I might sound really dumb Herr but “technically” the photo above is large prescription medication bottles affixed to the center of a fan do I have that right?

Do you pour your diy mix into the med. bottles,or are those bottles inside of mounted bottles?

are those bottles inside of mounted bottles?

Only a guess, but I would think the bottles go inside. I’ll say this, I think @DarthVapor3 is gonna put Dish Network out of business…lol

LOL!
Yes they are Rx bottles that have been permanently attached to the center of the fans. I used those because the 30ml bottles fit in perfectly and nice n’ snug (pictured here upside down) … so once you flip the switch those bad boys spin and create a vortex through the juice…much like a magnetic mixer. Then you just pull the juice bottles out, label and done;)

I also have “adapters” I created for smaller 10ml bottles. It may not be the prettiest piece of equipment but this baby mixes!!!

Greatest part of it all is I didn’t have to spend 1 cent and I was actually in the process of considering a $150 lab mixer when I read some where that a guy duct tapes his bottle to the inside of his wheel wells on his truck LoL!
So I started looking around for things I could tape my bottles to that shuck or spun…
Let me just say this was not my first attempt and I wish I had pictures of the first few horribly wrong ideas…taping to an electric tooth brush…power drill…rotary saw…they all ended in tragedy and almost loosing a few windows hehe