Which nicotine base to use?

New to DIY and have a bit of an issue…I am a veteran vaper and my husband is trying to quit smoking cigs. He’s currently a pack+ per day. We both have the Aegis boost and love them. We have both been using 3mg FB. I am great with it. Him not so much. I knew it wouldn’t be enough for him.

My question is if I start making our own juice do you think I could get away with buying a salt nic base and just diluting it to 2 different strengths for both of our needs? I can’t do anything over 3mg in FB without getting a headache.

Or would I be better off getting a stronger regular FB nic base and diluting that for both of us? I heard using high mg fb makes juice harsh/nasty.

Thanks in advance for any answers and assistance

could get away with buying a salt nic base and just diluting it to 2 different strengths for both of our needs?

Yes …You can also do this with Regular Nicotine as well…

The most economical approach to nic in DIY is to buy it at 200mg strength. The higher the strength and the larger the amount, the cheaper it becomes. Also, it gives you the ability to do precisely what you want.

The first thing you do is dilute it. Let’s say you get 500ml of 200mg nic. Take 50ml from the bottle, then add 150ml of PG to it. You’ll then have 200ml of 50mg strength. From there, when using the calculator on this site, you can tailor your recipe for varying nic levels.

There are plenty of people who’ll tell you that it’s too dangerous to deal with 200mg nic. That’s bullshit, unless you’re one of those people who live in fear. I once spilled about 10ml of 200mg on my hand and it was about 25 seconds before I wiped it off with a paper towel. I didn’t bother washing my hand, just out of curiosity. I got a slight buzz and that was it. But that’s me, I’m not afraid of much at all.

I would suggest you get 100mg/ml nicotine strength, as it would be easier to use. And yes, if you are an adult, especially if you’re an ex smoker, higher nic level would just give you a buzz. But if you have kids or pets, be careful. It wont kill them, maybe, but it would make them very sick.

Haha I’m not scared of it…I used to be a pharm tech so I have mixed all sorts of crazy shit. I more or less want to know wich one would taste better for me while still giving him the nic he needs. Right now I have 48mg nicotine in my cart…but I definitely see your point in getting higher and just diluting down. Thanks for your response!!

I smoked for 18 years. But I have been off them for a while. My question was more towards salt vs freebase. I can adjust the strengths myself as needed without an issue. I have never used salts before and don’t want to end up dizzy or with a headache even though I’d plan to dilute it down to 2-3mg.

My question was more towards salt vs freebase.

I used freebase when I started mixing, but switched to salts due to the freebase throat harshness I grew weary of. I use 3mg nic and when I switched to salts, I used the same 3mg. I had no issues at all. All I can say is try it and see. But be aware of the lack of throat hit with salts. Some people really like the hit.

Thank you! I think I am just going to order both

I have read so many discussions and reviews and everyone says something completely different. Plus I’ll just keep wondering about salts until I have tried them.

I’m sure there are a lot of opinions out there. Smart to try both I think. I use 100mg PG based. Easy to math out and not too thick for a syringe.

I use SN at 4.5mg. I’ve been doing it for at least 2 years now. A few months ago I pulled out some freebase from the freezer and mixed up a favorite recipe. The throat hit was quite noticeable and I didn’t like it at all. I’ve got about 2.5 years worth of it in my freezer and I’m giving it away when I leave here in July.

I have never used salts before and don’t want to end up dizzy or with a headache even though I’d plan to dilute it down to 2-3mg.

It appears that “salts” of Nicotine are thought to be less efficiently absorbed than base Nicotine (via mucus membranes of mouth, throat, stomach as well as lungs) when vaping. A similar characteristic (may, possibly) be the case where it comes to (dermal) absorption through one’s skin tissue. The use of gloves does no harm.

“Salts” as formulated have particular compositional fractions of Nicotine and the acid used. For instance, the common (as in JUUL juices) Benzoic Acid has a 1:1 (molar, molecular) ratio with base Nicotine. Mixing such “salts” with base Nicotine will result in a more alkaline (basic) solution, and (may, potentially) degrade the enhanced stability (in terms of oxidation in steeping, storage, etc) that “salts” of Nicotine are thought to possess (relative to solutions containing base Nicotine).

In addition to possible issues surrounding the much higher viscosity of VG relative to PG at room temperatures (and resultant problems shaking to “re-mix”, and physically working with such suspensions in VG Glycerol), the info appearing below may also indicate the occurrence of a higher kinetic rate of oxidation and discoloration taking place in VG Glycerol (as opposed to PG only) suspensions:

2. CHEMICAL REACTIONS WITH OTHER SUBSTANCES
Nicotine as an alkaline solution will experience a change of color from clear to light yellow to red during the mixing process with other acidic substances. 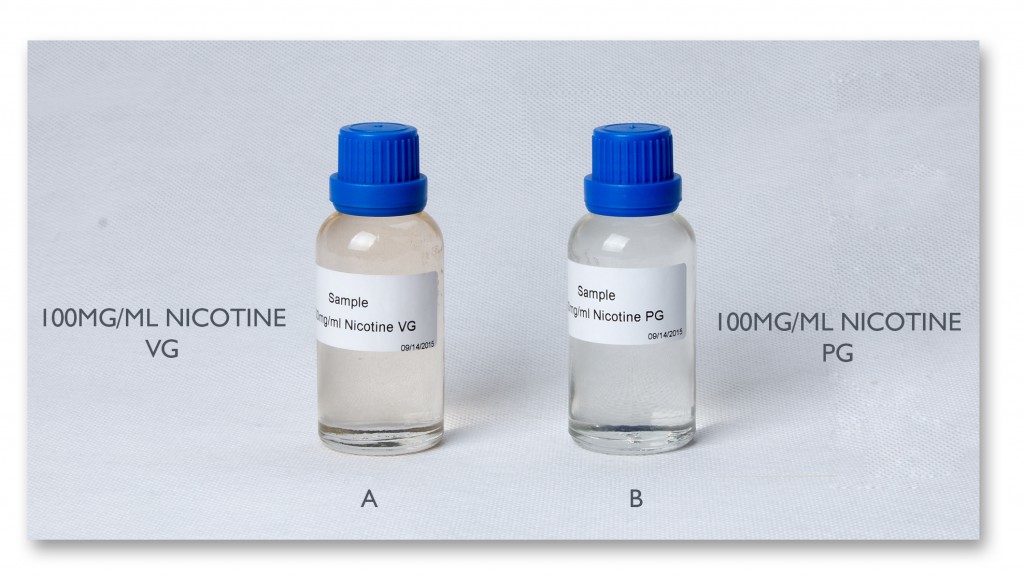 Thanks for all that info

what a great group! When I go this route I will not mix the 2 bases!

I’ve got both otw in smaller sizes to try out until we know what works for both of us. Thanks so much for your help

I would suggest you get 100mg/ml nicotine strength,

@2boysmama135, I vote with @delltrapp. 100mg is strong enough to save money, but not too strong wherein it’s overly dangerous. Still CAN be if you don’t use caution, but it’s the sweet spot.

I more or less want to know wich one would taste better for me while still giving him the nic he needs.

I missed this part, but tastes better, can be to the individual’s tastes. I’ve used both Salts and Freebase, and prefer Freebase. The Salts made me cough at any strength for some reason. If taste is important (and it SHOULD be), then whatever NIC you get, make sure to break it down into glass bottles with good caps, and preferably store in the freezer. Oxidized NIC just tastes funky, and harsh, so store your NIC wisely.

The text below appears to indicate an estimate of dermal dose equivalent (to inhalation, by means not specified ?) of Nicotine as nearly 1,000 times larger:

The potential of nicotine to pose a skin absorption hazard was also evaluated, with use of a predictive algorithm for estimating and evaluating the health hazards of dermal exposure to substances [NIOSH 2009]. The evaluation method compares an estimated dose accumulated in the body from skin absorption and an estimated dose from respiratory absorption associated with a reference occupational exposure limit. On the basis of this algorithm, a ratio of the skin dose to the inhalation dose (SI ratio) of 997.7 was calculated for nicotine. An SI ratio of ≥0.1 indicates that skin absorption may significantly contribute to the overall body burden of a substance [NIOSH 2009]; therefore, nicotine is considered to be absorbed through the skin following dermal exposure. Additional information on the SI ratio and the variables used in its calculation are included in the appendix. No estimated dermal lethal dose (LDLo) values for humans were identified. A dermal LD50 value (lethal dose in 50% of exposed animals) of 285 mg/kg has been reported for rats [Gaines 1969]. Because the reported acute dermal LD50 values for rats are lower than the critical dermal LD50 value of 2,000 mg/kg that identifies chemical substances with the potential for systemic toxicity following acute dermal exposure [NIOSH 2009], nicotine is considered toxic after acute dermal exposure.

Absorbed fraction of nicotine from finite doses was ≈0.3 at 48 h. … The data demonstrate the potential for significant nicotine absorption through skin contact with e-cigarette refill solutions and the neat nicotine used to mix them. …

… This hazard is particularly acute in occupational settings in which workers mix e-liquids from neat nicotine and other constituents, and fill cartridges from tanks of e-liquid. The use of personal protective equipment, including adequate gloves, is essential. The same applies to individuals who mix their own e-liquids for personal consumption. Neat nicotine is particularly hazardous, with a steady-state flux over 7 times greater than that of the higher permeating e-liquid, Lemon-Lime eJuice.

Casual contact by end users, on the other hand, appears to be less hazardous. A worst-case scenario, in which the entire contents of one e-cigarette cartridge are spread over the body in a thin film, suggests less than 8 mg of nicotine absorption, over a time course exceeding 24 h. The dermal uptake estimations presented here are not intended to be definitive. Many different factors could contribute to different outcomes, and e-liquid mixtures with different nicotine contents should be evaluated accordingly.

In vitro human epidermal permeation of nicotine from electronic cigarette...

Nicotine plus flavorings in a propylene glycol (PG) vehicle are the components of electronic cigarette liquids (e-liquids), which are vaporized and inhaled by the user. Dermal exposure to nicotine and e-liquids may occur among workers in mixing and...

Thanks drummer! I will definitely invest in some glass bottles!!

You might (possibly) find some of the information on this previous thread helpful:

Mods, my appologies for the VapeMail spam, could we move ALL of the NIC Bottles/Caps posts here ?