Which one iPV4-S or the Cube II

At a bit of a loss here… I currently use an iStick 50 but am looking for a second device…
Which would you look at getting?

I’m holding out hope for the iPV D2 to be amazing. I want a small, single removable battery mod. Having to marry sets of batteries and remember which one goes where at what time in order to get the best battery life and performance is just too much work for me. There’s no way I’d be able to keep track. But, that’s just me. From what it sounds like they’re both pretty good, but the iPV4 seems to be the winner.

Having to marry sets of batteries and remember which one goes where at what time in order to get the best battery life and performance is just too much work for me.

I love the battery life with a dual battery mod!

I do love the size of the single battery mods though

I do as well, but I can’t remember when charging them if I have to put 1 on the left or 2 on the left. I can barely remember which batteries I have that are charged and which ones are dead. LoL I think I may be a lost cause.

I just write on the batteries with a sharpie

I do the same exact thing, I have 4 married pairs all with their own symbols.

Which would you look at getting?

Do yourself a favor and save about 15-20 bucks on the IPV4S and go with the IPV4. There is not one difference other than the name and the cheaper price now of the IPV4, pioneer4you released an update for the IPV4 on the 7/16 that allows the IPV4 to go to 120w and temp control also works with titanium wire, same as the IPV4S. Btw, I own both the IPV4 and IPV4S.

which one goes where at what time

As long as I pair the number the batteries automatically pair… 1 up, 1 down.

I can barely remember which batteries I have that are charged and which ones are dead.

i put my dead batteries in the case upside down. 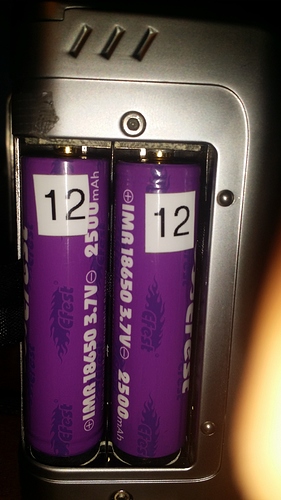 looking for a second device…

I get my upgrade to my eleaf50 to the xcube 2 on monday so I can give ya a review on what I think then! Im not sure the price on the other atm but if budget is tight you can snag the jam packed xcube 2 for 59.99 and I really couldn’t beat that at the time!(make sure it comes TC unlocked though otherwise its an additional $10 thru the app)

If you haven’t resolved it by Monday I will let you know what I think!

Well I’m biting at the bit… not that ANYONE on this forum knows what that’s like … with all those “I hope my wife/husband doesn’t see this…” comments. I’d love to see a study done on how many vapers are bigger impulse buyers than non-vapers lol. A few more days may make more hair fall out, but it would also give a few others to chime in on which device(s) to purchase for hopefully my last one for awhile.

Well I will say I have NEVER been such a hardcore impulse buyer than I am with vaping equipment! Seriously! Just look at some of my threads/comments haha…right after an impulse buy I start saying, OK, I’m set for a while now and can’t buy anything else! Then in some instances I make another damn purchase within 60 minutes of my last!!

I actually just had to make another small purchase 15 minutes ago!! Since I have only had the eleaf 50watt I didn’t know that it was standard that mods do not come with actual batteries, seeing that the eleaf is preinstalled…so I just had to go buy batteries and now come monday I am basically going to have a shiny paperweight until thursday when the damn batteries come in! :…(
I’m actually a little pissed off at vapenw because they made no mention of this when I bought it and for people like me that don’t know any better, I believe they should of at the very least stated BATTERIES NOT INCLUDED…live and learn in the vape world…

Thankfully I have a good friend that knows a lot when it comes to all this and with the horror stories he has told me I am glad he pointed me in the right direction! I just picked up 2 high quality 18650 batteries for $10 w/ free shipping

What and where did you get/order your batteries from?

I tend to personally steer clear of ebay when it comes to vape type stuff BUT my buddy knows this seller and he has a top notch reputation when it comes to his merchandise. For what it’s worth he told me to stay away from china made batteries too and that they are usually fakes and very dangerous. I trust him so whether or not that is truth or fiction matters not to me, it’s all I needed to hear to heed his warning

I think I’ve mentioned this in another (okay, maybe a bunch of other) thread, but I’m a big fan of these Samsung 25Rs, especially since pairs come with a free case and they’re only $5 each.

Can’t go wrong with the LG or Samsung batteries as long as you’re buying them from reputable sources.

That’s the truth! I recently had seen numerous cases of batts/mod exploding in peoples faces and all the other horror stories I briefly mentioned. Di**kheads like this will sure to help the regulation battle…

I always try to do a little research as well… then found this:

I am sad to announce that we have recently been a victim of
counterfeit batteries. Fortunately we caught the problem very early and
released a total of ~130 cells. We have isolated the exact customers
that the batteries have been sent to and if you did not receive an email
you do not have to worry. The counterfeit batteries are limited to
orders shipped on 8/1-8/4. This PSA is to inform
members of the vape community of a new kind of counterfeit battery that
actually performs similarly to VTC5s during initial testing. This is
dangerous because it’s hard to determine their authenticity without
testing equipment and existing data on authentic cells. As far as fakes
come these have been the most realistic with a rewrap of what we highly
suspect to be Samsung 25R cells which are supposed to be 20A continuous
capable cells. While the Samsung 25R is definitely a capable cell we are
unsure of it’s longterm performance and battery longevity if discharged
at 30A instead of 20A.

I hadn’t heard about this, but it is good to know. Thanks! I hate that this happened, but I’m glad that they’ve done what they can to fix it and hopefully comp people for the counterfeits.