When I was a smoker, my favorite cigarette brands were Player’s Navy Cut and King’s Red. I didn’t think much of it at the time, but it seems I enjoyed some sort of Virginia blend the most.
I haven’t been able to find much info on King’s Red, other than it’s a virginia blend. But I’m sure I detected a bergamot note when sniffing it.
I already have Flavorah’s virginia, but it doesn’t get very positive reviews, so I assume there is a better alternative out there.
So, any recommendations for a good virginia tobacco aroma? Also who has the best burley, as Player’s seems to be a blend of the two with a touch of rum?

I would go for Flavourart or Inawera, both for the Virginia and the Burley. They both have awesome tobacco flavours. Don’t know if Flavourart has a Burley, but Inawera does.

Sorry to hijack the thread but what tobacco flavours would replicate good old Benson & Hedges?

I’ve never smoked the stuff so I cannot vouch for it to be the genuine article, but there is a B&H super concentrate on the market. 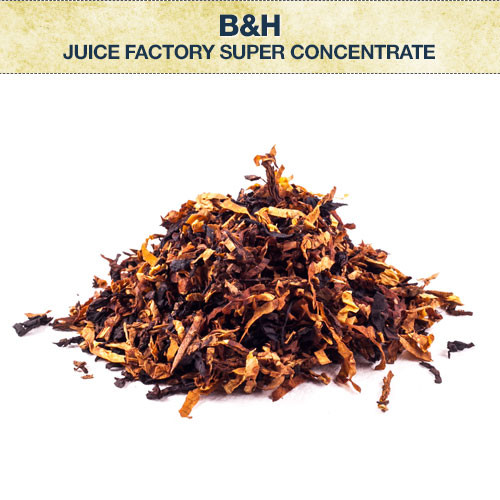 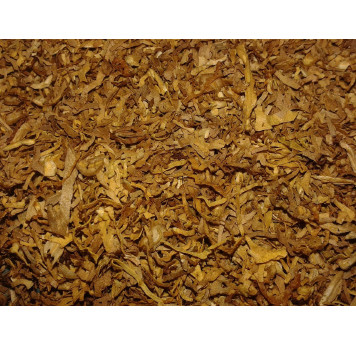 I haven’t tried these, but folks on other forums say that these are darn close.

One of my fav cig flavored smokes is ECX Mile Seven; this with a bit of Inawera DNB is awesome! 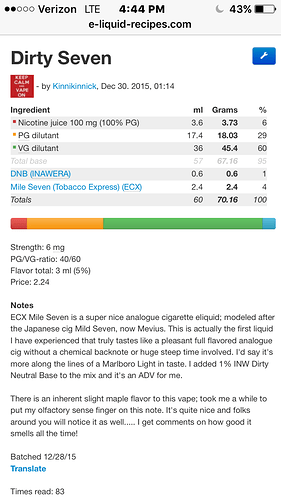 Thanks for chiming in

It’s not public, but here it is anyway. I’m tweaking this one, but it’s almost there! I want to add .5% DNB to the next batch for a bit more ash. 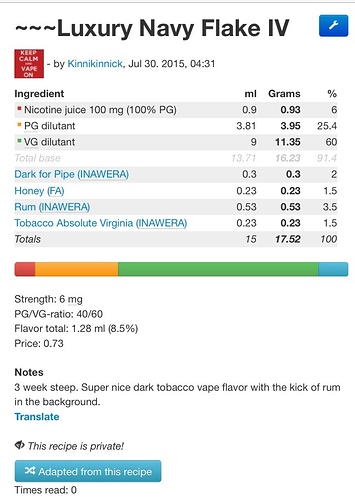 Thanks Josephine, much appreciated!
I will need to order some and give it a try.

Thanks also Kinnikinnick, much appreciated!
I will also have to look into these!

@Josephine_van_Rijn Flavourart and Inawera are generally my favorite suppliers. I am currently building up my Inawera stash, so some more tobaccos could easily be part of my next order. But, oh so many choices

@Kinnikinnick Thank you for sharing

it looks damn tasty.
I was really fond of Player’s Navy Cut but had to quit them, as my fingers turned yellow and my lips got torn, because they have no filters. But omg the taste!
Of course my honey is Inawera and my rum is Flavourart

I’m not familiar with ‘dark for pipe’ but you think it’s better than a burley in this mix to mimic the PNC?
Also would you recommend absolut tobacco virginia, if I was only ordering one of the virginias I listed?

Of course my honey is Inawera and my rum is Flavourart

The INW honey should be fine, however, the INW rum (plain, not Jamaican) is the charm in this mix.

I wish I could speak for all the Virginia tobaccos you listed from INW, but I haven’t tried them.

The INW TA Virginia is an excellent liquid. You might have to do a lot of review reading to decide which of all those Virginias is the one for you.

As far as the Dark for Pipe, here’s my opinion on this flavor from my stash notes:

As close to a hand rolled, slightly spicy, dark Virginia tobacco flavor as I have found. Some liken it to Old Holborn rolling tobacco. A super pleasant analogue flavor type vape. Deep pipe tobacco flavors come through as well. Notes of Drum and/or Bali Shag rolling tobacco make the scene. This is a Inawera winner! For most a 1% start point will be good. For tobacco lovers, the single flavor mix will be 3 to 4%.

I haven’t tried them all either, if I had the dough I would buy them all

I have actually already read more than a few reviews, but just haven’t stumbled upon one that sold me any, as you just did with the DfP.

Also I have realized, that I will have to do some research on actual tobaccos, to get a better sense of what I’m getting into. The tobacco aspect of mixing has lately revealed itself to be more complex and intriguing, than I would have thought.

I haven’t decided yet, but I might just do that

research on actual tobaccos, to get a better sense of what I’m getting into. The tobacco aspect of mixing has lately revealed itself to be more complex and intriguing, than I would have thought.

Exactly! I have done much the same over the past year. The tobacco threads on ECF are pretty revealing, as well as reading a lot of pipe/cigar/RYO reviews to get the lowdown on flavor profiles.

It’s amazing how much I didn’t know about tobacco and just the process of how each one is produced!