Who makes a good Grape Flavor?

Anyone got grape opinions? I’m looking at making http://e-liquid-recipes.com/recipe/84458/HIC%27s+Catherine+the+Grape+%28clone%29 but I don’t have either flavor.

What makes this even trickier is this flavor is not ultimately for me. My cousin is trying to get off smokes again and is the one asking for a grape. Also she complains that every juice makes her cough except for stuff I’ve mixed, so I wanna go as high VG as possible (which is part of why FA is so appealing).

Now that sucks to hear. I just ordered FW Grape (Natural). Please don’t tell me this is the one you speak of. Luckily I have no intention to blend a standalone with this Grape but none the less I do plan on some mixes though…

Well, technically it’s Mt Baker Vapor “Grape”, but I’ve entered it in my stash as FW Grape, because . It’s also nearly two years old. Could be a mistake on my part.

Anyway there’s nothing natural about this flavor. It tastes like grape Lik-M-Aid which would is fine, but then my taste buds just kinda go numb to it or something. 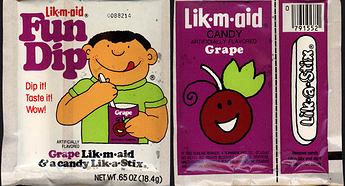 Maybe this is why there is no flavor. You would think at some point flavor would deteriorate…

Except when I got home and vape it, I’ll be able to taste it again for the first 3 puffs. It’s bizarre.

Except when I got home and vape it, I’ll be able to taste it again for the first 3 puffs. It’s bizarre.

Flavour Art’s Grape Concord is good and and White Grape is supposedly good as well!

Yeah, I’m definitely ordering some FA Concord Grape! On the fence about the FA White Grape. Trying not to order a dozen FA flavors that I don’t really need right now. Probably going to fail.

Grape is something I’ve been searching to find myself and no luck so far. I agree that it taste good for about 3 puffs and its gone. I have given up on it for now.

“The less a man makes declarative statements, the less apt he is to look foolish in retrospect.” - Four Rooms

So I didn’t get the FA Concord because I was placing an order with a shop that didn’t carry it. Instead I picked up TPA Grape Juice and TPA Grape Candy. Can’t say I regret getting the Grape Juice, it’s pretty much what I was hoping the FA Concord would taste like (still gonna get some one of these days). That Grape Candy, not so much. Very floral/perfumy tasting on its own. It’s a passable grape jolly rancher if I mix them half and half.

Trying not to order a dozen FA flavors that I don’t really need right now.

I have a dozen or so FA flavors and I was quick to test them all out. I haven’t tried one yet I regret buying.

And another thing I have noticed is I am not going through them nearly as fast as I have my CAP and TFA flavors because it just takes a very small amount to do the trick. FA is definitely my favorite so far. So I plan to start mixing more and more with it.

…and the TFA Grape even at low low % is a very DEEP PURPLE, I’m scared to vape it in fear it’ll piss on me and stain my clothes etc.

I had similar finding with Grape Juice and Grape Candy…but I’m after a solid grape jelly for a PB&J.

I’m not familiar with a TFA Grape that is purple colored. Searching https://shop.perfumersapprentice.com/ I only see Grape Candy and Grape Juice one of which is competely clear and the other slightly darker and yellowish. I didn’t start using TFA til recently tho, so I wonder if maybe it’s an older, discontinued flavor? But a deep purple grape sounds more like the description of Lorann Grape flavoring to me.

You might be right, I usually but TFA, I will hafta check my receipts to be certain.
I wouldn’t have purchased Loranes based on reviews I’ve read previously.

I like Medicine Flower grape and i mix it with Grape Candy TFA in one of my recipes.

In my Grape My Apples mix i use Grape Candy TFA and Grape Juice TFA.