Why do most cream vapes make my skin crawl?

I’m wondering this for a while. Many shop bought liquids that have some sort of cream in them taste very chemical to me. OHW Milkman is one of them, I just can’t it’s so so bad. Now with DIY I run in to the same issue. Even a simple strawberries and cream is tasting bad , I have one steeping for a week and that chemical taste is still there. Will it improve and go away over time ? How much time ? I really hoped with DIY I was going to enjoy a nice cream vape. 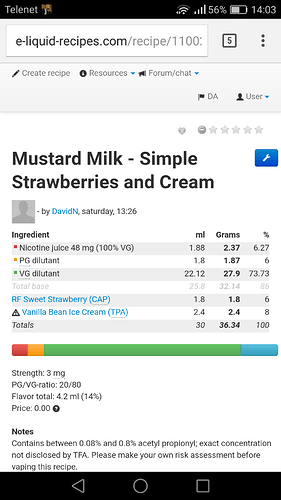 Well 8% VBIC looks to be too much for my tastes, too. Try knocking that down to 2% and let it steep 2 weeks. The VBICs tend to intensify greatly after a couple weeks of aging. I’m like you - I like my creams to be subtle and allow the fruits to float on top. Most commercial juices lean too heavy on the creams for my taste.

Also, not totally sure which Strawberry is indicated there, but Cap Sweet Strawberry to me is disgusting by itself. I use it sparingly layered with other strawberry flavors.

I don’t know “RF Sweet Strawberry (CAP)” but with the “normal” CAP Sweet Strawberry I’ve had the same issue. Chemical, artificial taste. It’s getting better with a longer steep time but I stopped using it now. Perhaps in a mix with another strawberry.
Still waiting for my MF Strawberry which has a lot of good reviews. The Shisha Strawberry was rubbish for me, too. Very artificial tasting but I have a suspicion it may have been a bad batch. Need a new bottle to confirm.

This recipe for a cream stone has comments about percentages that may help you in your cream based journey.

Sorry Bad Influence, I don’t mean to reply to your post

I made it with another strawberry too, same problem. Is there such thing as a non chemical cream flavor ? Same problem with my strawberrie flavors, they taste somewhat chemical. Or is it just me since many people seem to like that recipe. I made a very popular Pancake clone and it’s just bad after a week. 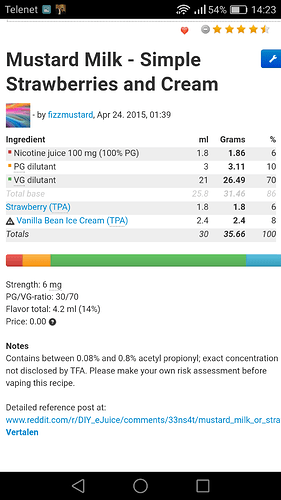 I have a shisha Strawberry in the mail right now, might get it tomorrow.

All the recipes with cream in them ive tried were TOO high in % imo, leaves you with a weird taste / smell like gone off toilet cleaner…

In fact, high perecentages of most flavours leads to a very weird vape, too low and theres not enough flavour, too much and its just a mish mash of stuff.

The line is so thin it seems, I also believe that the PG/VG ratio plays a huge part in the flavour, I made up some 60pg/40vg mixes and they vape wonderfully, whereas their 30pg/70vg counterpart did not.

cream vapes should steep for at least two weeks or a month if you can hold out that long , that recipe itself ive never been a fan of no matter which strawberry is used , a lot of flaves contain chemicals that you may be sensitive to but you can let your juice breathe while steeping, or after, this will allow the alcohol to evaporate

I guess it’s just hard as a beginner as it is with most things. I’ll try again with lower percentages creams. Thanks people.

When I did make that recipe I did the original and then I made the same one but dropped the VBIC to 2% so much better 8% is extremely too much and it comes off as black pepper for soo long being used that high.

I think if you try other creams and use them lower you may find you like them better that way steeping is the key w/ them and they do steep stronger and can take over the batch rather easily. I’d say start off at 0.5% see if it’s still as off putting to you. You just may not like creams. As far as strawberries go I tend to heat those mixes sometimes it’s a short 15 minutes sometimes it’s about 1 hour it all depends on what’s in the mix then I stirr it on the magnetic mixer to give it more air incorporated into it…then I’ll bottle it and keep the top off til cool. This helps when the flavor has alcohol in it. Not all flavors I do this to but some need it and it does help w/ reducing the chemical note. I know that some of the top notes and more fragile notes will be lost during this process but it works for me and the sacrifice of that is ok by my. Then steep it certainly if it’s paired w/ a cream.

And she’s not called the Flavor Queen for nothing

I’ll try again tomorrow Amy , thanks so much. Will get back here and let you know how it goes. I LOVE cream vapes on the inhale , it’s the exhale that I have issues with. I will lower the percentages for sure.

I know some cream recipes remind me of bad breath and grosses me out. It just depends on what cream it is and what it’s paired w/.

I did make a strawberry cream that is quit pleasing, I dropped the amount of creams and it’s a lot better en will improve with some steeping I’m sure. Also the Straberry shisha surprised me , I really like it.

SB Shisha has that effect on many