Well I am now in a dilemma which to choose.

I have my heart set on the X Cube ii… purely for the shiney, shiney , LOL… gadgets…gizmo’s
connecting it to phone…
I know each mod has it is Pro’s and Con’s

Aspire Pegasus has Many… most annoying one is the 30watts pulse it sends out when switching from wattage mode to TC Mode… not good if you have low wattage coils…DEAD before you begin vaping .

But either way i will start a POLL anyhow

I have both and haven’t used the X Cube for ages now, but use the RX200 everyday. @Pro_Vapes calls the X Cube the EX Cube.

You’re taking a risk with the exCube. It’s old technology now and you may regret your purchase. The RX is new technology… IMO the way to go. If I could vote more than once, I would make sure the RX is the winner of this poll.

The Xcube2 app issues and phone issues (for android) have been worked out, so thats not an issue anymore.
Ive got both, but almost never use the Cube, so much so that I sold it last week for what I had into it ($45).
The RX200 is worlds away from the xcube2…buy that one!
It just does everything better…but with zero gimmicks. If temp control is what youre after buy the RX200.
Ive had ZERO issues with the RX200, so im not exactly sure what was meant by that.

Also, as far as the features of the XCube2, once you get the app running, youll almost never use it, you can do everything onboard in the same amount of time (and the device menu is slllloooooow!)
The lighting? Yeah its neat at first, but who really wants the “look at me, look at me” device when in public??? So I found myself turning this feature off at work or out on the town. BUT the led does have a benifit: the XCube2 has kind of a slow ramp up, so I adjusted the led to ramp up with the device, so I would prefire the cube, id look at it and once the led was lit id take my puff.

Buy the RX200, Evic mini, or Cuboid instead of the XCube2…youll be much happier!
Joyetech FTW!

As I sit here reading this…I am using the RX 200. Had it for 3 months and have been very happy with it.

The RX200 is a wicked mod! Best one I own. Little bulky but not an issue for me. Had mine for two months. No issues. Flawless everything. 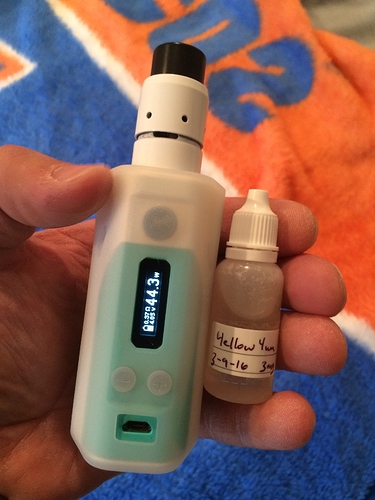 I have them both and like them both equally, but I’m the minority here.

The Excube has no pros. It has plenty of POS though. If I hated you I would not wish that thing on you. It’s terrible at TC and made by a terrible company that couldn’t sell me a bag full of Benjamins held between Angelina Jolie’s bare thighs for a peso.

A few people got decent mods, the rest of us were shafted. I have one that I would give to you, but you seem like a nice guy wanting off the stinkies. I wouldn’t do that to you. One day though, a real asshole will need a mod, and he’ll get that with a couple of “35A” Efest batteries in a flaming bag on his porch.

Are you picking up what I’m laying down?

I’ve had both. Get the Rx200 simply because the 3 batteries make it last quite a bit longer than my xcube and its 2 batteries. Also it will fit better in your hand. The only thing I don’t like about it is it does not have wattage memory settings like the xcube, but it’s not that big of a deal if you’re not jumping all over the place.

hey im using a velocity with mine too. it’s a great combo.