Wotofo the f***… think I am in love with another fluffy chucker! The troll rta blew my flavour mind, but the dreaded melting peek insulators made me sad face a lot! The kylin arrived and stole my heart, before it started leaking more juice than I actually put in it. Then my beloved ammit dual… had to be the best rta out there no question. 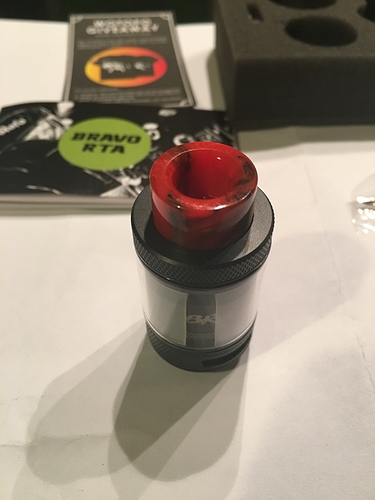 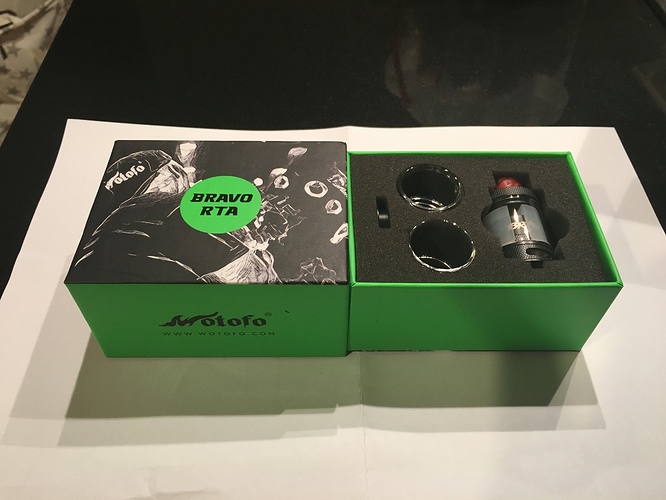 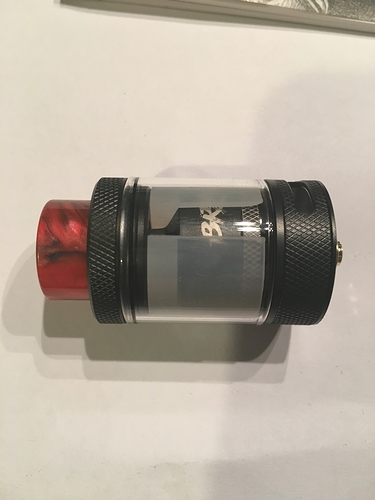 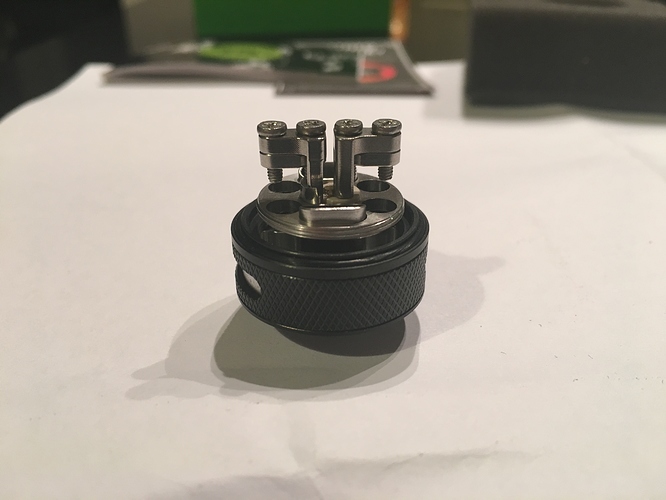 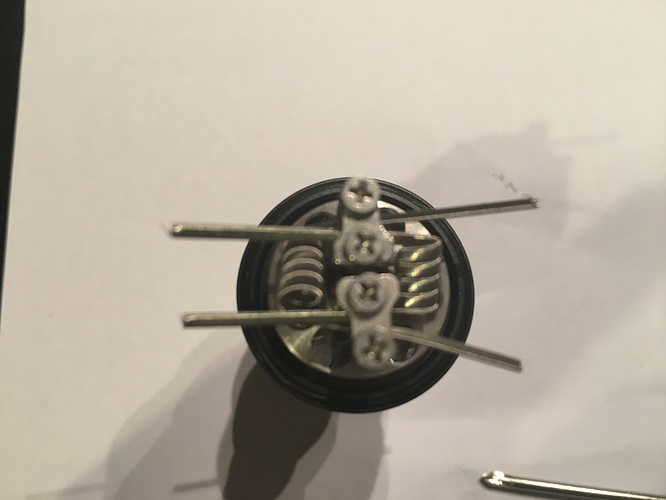 On first look the machining and build quality is superb. It feels right, it feels expensive and without doubt the best build wotofo have blown at us yet.

It comes in stainless silver and black and the resin drip tip is top drawer, pardon the pun. I have never had something that feels so right between my lips (I think I have been reading too many of vapey mama’s posts).

The tank comes loaded with spares, 2 glasses, 1 chubby wideboy, great grub screws that won’t thread, and 510 drip tip adaptor. The comp coils can’t be faulted either, lighting up the room at 0.10 ohms. 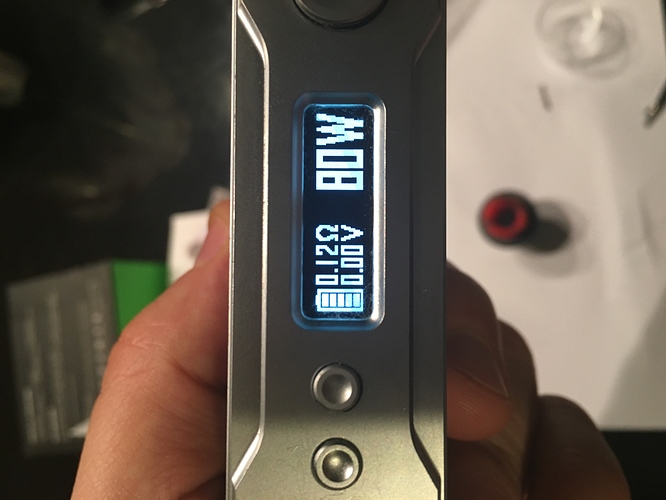 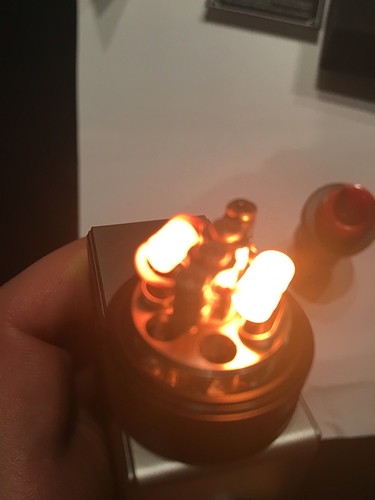 This has banked airflow to focus those gulf streams around the coils. It is a breeze to wick, troll style and I haven’t had any leaking or dry hits in a week of vaping. I am almost sad I won’t have to get tank vape mail again, this is all I need.

Easy too fill design with a fancy push down and twist release. And alas the cap isn’t flush so u don’t get covered in juice each time u refill aka ammit dual. 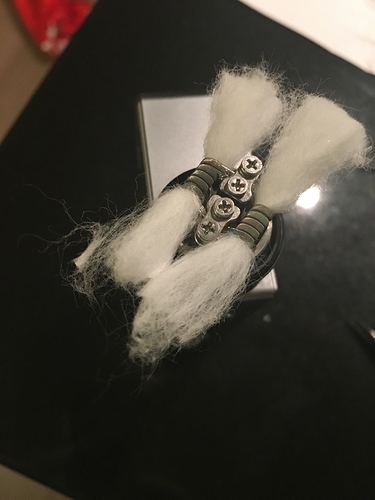 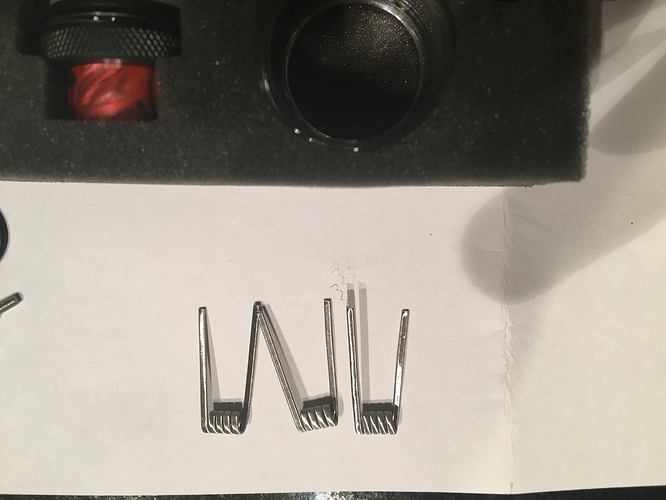 Onto the performance, this is a flavour monster, it chucks clouds too, but true to wotofo’ s mantra its all about flava flav.

I have been vaping HIC’s grand marnier mousse non stop. All concentrates provided by rainbowvapes.co.uk who I can’t praise enough. U.K. Readers should check these guys out. Huge range, great free shipping over £10, low prices and if you mention ‘dan’ in comments field when u order, you’ll get a free concentrate. I have no affiliation with these guys but want more people to use them. How often do u want a couple of missing bits but don’t want to pay postage. Here’s your rescue station.

In summary, well done wotofo, you made my best ever rta, and at around £25 at time of writing it screams value. They should have called it bang4buck but perhaps the connotations didn’t fit.

Special mention to dearest pugs who entertains me weekly and promoted me to have a crack at this review lark. Pugs I think my meagre attempt can only make you look better!

nice review , im a big fan of wotofo i may have to check this out , im not a big RTA guy but im satrting to lean that way more and more

Thanks for reading! Yes the clamps have a very clever added feature, as u undo the extra long screws the bottom clamp lowers and as you tighten it lifts back up so you don’t have to use the other handle to jostle the bottom clamp in place. While holding the coil leg still. Not groundbreaking but something I haven’t seen before

Defo worth a look if you need another tank, and probably if you don’t! I have never seen a company put a thick silicon sleeve inside the glass. Not sure if this is just extra care to protect it during transit or if it’s for tpd to lower the tank capacity.

Nice review dude! Is it tricky to get both coils to stay in the right place while you’re tightening down the clamps?

No they stay put nicely. The only issue I found was being able to snip the coil ends off neatly once both sides are in place. To be fair my clipper is a bit rusty

You can put one coil in to see what leg length u need, snip that, remove, place on jig next to 2nd coil and snip its legs the same length and then place both in.

Tanks for the info. I keep seeing more and more good things about this one. Going to have to put it on the list.

Great advice worm thanks. Why didn’t I think of that

Sorry I meant not grub screws but proper screwy screws. Anodised harder than hard. Wax lyrical ing about screws what has it come to

I’m about to toss this rta in the trash. I know, i know…but Hear me out. First off, I’m no noob, I’m an experienced builder (3.5 years) and I have an embarrassingly large # of RTAs as i purchase about 90% of all new dual coil rtas that hit the market. I have never been so perplexed by an issue that I was forced to post on a comment board. Anywho, I love wotofo and with the troll being one of my favorite attys, I was all over the bravo; I was so certain i would love it, i bought 2 before tyin it, which I’ve never done; gun metal and ss. The first build on the tank was wonderful…for a day. Then I started getting a nasty taste. Assumed it was a wicking issue and adjusted cotton even though the cotton appeared totally saturated. Still same gross “dry hit” like taste. Tossed the nichrome fused Clapton’s I had in there and tried some kanthal claptons. Same nasty taste. At this point i knew It wasn’t wicking, I’d tasted this before when leads touched other coil or a coil touched a deck, basically i was tasting the smoke from a small short. Only problem was, I had no part of coil or leads touching anything. I even did a regular round wire 22 gauge kanthal build and spent 20 minutes bending leads just right so they didn’t even touch inside the clamps. Still smoking as if there’s a short. Gave it an ultrasonic bath to get out any tiny metal scraps that could be responsible, still shorts. Defective rta snuck past quality control right? WRONG. I’m experiencing the exact same issues with BOTH of them, which I bought from DIFFERENT vendors! I’ve switched mods as well; tried them on 2 different minikin v2s, the minikin reborn, the lustro, the rx20700 or whatever it’s called, the drag. Bottom line is it’s not a mod issue. If anyone had any idea what’s going on here I’d love to here it. No one else apparently has posted about having this issue, it’s not the mod or the vendor or 1 defective device, not the wire or the wicking and no discernible metal on metal. So what then?poltergeist? witchcraft? Some clever passive aggressive sabotage by my vape hating wife? is this how thy all are and everyone online is simply pretending they work great to make me crazy? I’m leaning toward poltergeist. please, i want to love this atty…but it tastes like an electrical fire!

Some clever passive aggressive sabotage by my vape hating wife?

so if not the juice, did someone pee in your cotton?

@Cloud98 I am REALLY liking the looks of that. Thank you for taking the time to put this up.

Thanks, Juice was not the issue i used different kinds in the two tanks plus I DIY and am using this batch of juice in multiple setups (i maintain around 10 mod/atty combos at all times ). I say “was” because after I posted this, I totally removed the bottom clamps and 510 pin of both attys and put it all in the ultra sonic cleaner again even w/ screws / screwdrivers (my thinking being if i drivers had grease or oil on them then it’s within the realm of possibility that it could have gotten into the drives of the screws and once heated up; skunked up my vape). After that I used the coils that wotofo provided with the tank and, though i don’t know exactly why, i finally got it humming again. Hope it lasts… thanks for the suggestion.

so if not the juice, did someone pee in your cotton?

Visit Topic or reply to this email to respond.

Johnwannamaker
February 4
I’m about to toss this rta in the trash. I know, i know…but Hear me out. First off, I’m no noob, I’m an experienced builder (3.5 years) and I have an embarrassingly large # of RTAs as i purchase about 90% of all new dual coil rtas that hit the market. I have never been so perplexed by an issue that …
Visit Topic or reply to this email to respond.

so it was really dirty wire that was used in the other builds?

Glad you got it figured out. I have been using my Bravo every day for a few weeks and really like it. I did notice when using the coils that came with the tank, I would get overheating errors. This was on more than one mod. Using any other coils I have had no problems and great taste and clouds.