Just received it in the mail. 20mg strength. 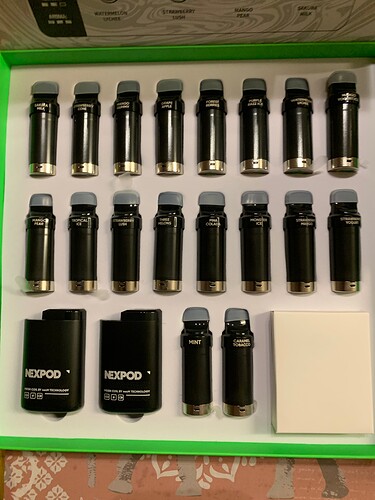 Is that a revew sample? Can’t wait to hear what you think of it

Yes it is i havent even got into it. Im contemplating if im going to sell it as every flavor has iciness to it. And its rated 2 out of 3 on all of the pods and thats not my kind of thing. So i dont know if im going to get into it. When i read the flavors only 3 where described as ice. So i was like yeah ill try to win it. Now i got it its all flavors with cooling to it. So i dont know yet what ill do

Im contemplating if im going to sell it as every flavor has iciness to it.

Yup, that SELLS it RIGHT out the door for me. NO CLUE why they find the need to “chill” all of them like that.

Yeah its ok if its a few but everyone is like that and its a real disappointment. Problem is once you vape one then another right after your mouth has been numbed out from the cooling agent. Just will mute flavors. And its really put me off trying it. And if i do i will hate it so i couldnt really would hate smashing on it because its not my thing

You see the suggested price on that thing at Wotofo’s website?? Ummm, no thanks

I mean I guess those really into pods. Personally, I wouldn’t pay $149 for 18 8ml juice pods that can’t be refilled. I get that there is the device with it, but ummm, no, just no.

Exactly i was shocked i figured 75 for the whole kit. As i found cigabuy listing them cheaper then that saying coming soon. I really dont get the fact that wotofo sold out of the 50mg in two days. I dont have to test it as they ruined it it buy putting cooling agent in every flavor. It really is a shame

I decided to go look at the pod itself. The only part that i could see that might be able to be taken apart is the coil base. It has two clips that locks into the metal base. With care im pretty sure it will pop off. And im gonna bet the coil used is probably that rebuidable mesh coil wotofo came out with.