Following up on the success of the Recurve RDA Wotofo and Mike Vapes are at it again with the Recurve Dual RDA.

What you get in the box: 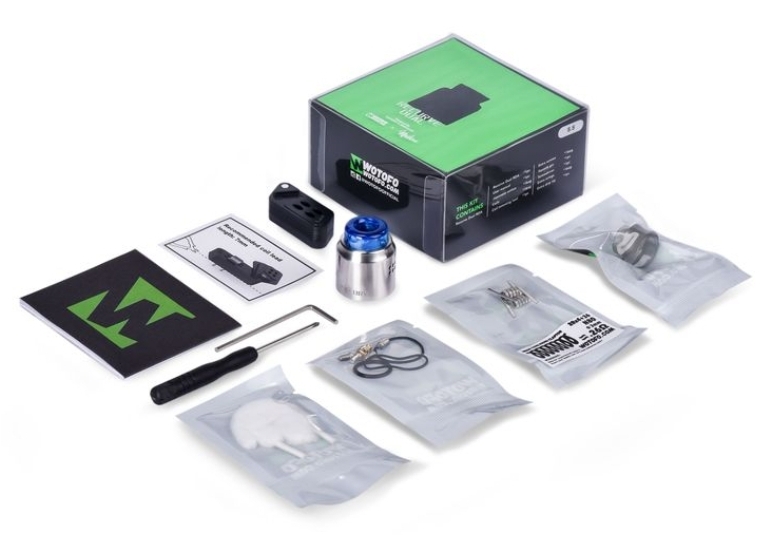 Getting to know the Recurve Dual RDA

If you are unaware the original Recurve RDA was a single coil RDA. some loved it, some not so much. I fell into the latter category, airflow was too tight for my liking so when a friend named Jim said it improved when he drilled out the airflow holes I followed suit and what an improvement, wouldn’t say I loved it now but definitely liked it a lot more. The new Dual opts for a straight barrel rather than the curve for the original, I miss that curve, thought it looked cool.

New Recurve Dual on the left, original Recurve RDA with the air holes drilled out on the right. 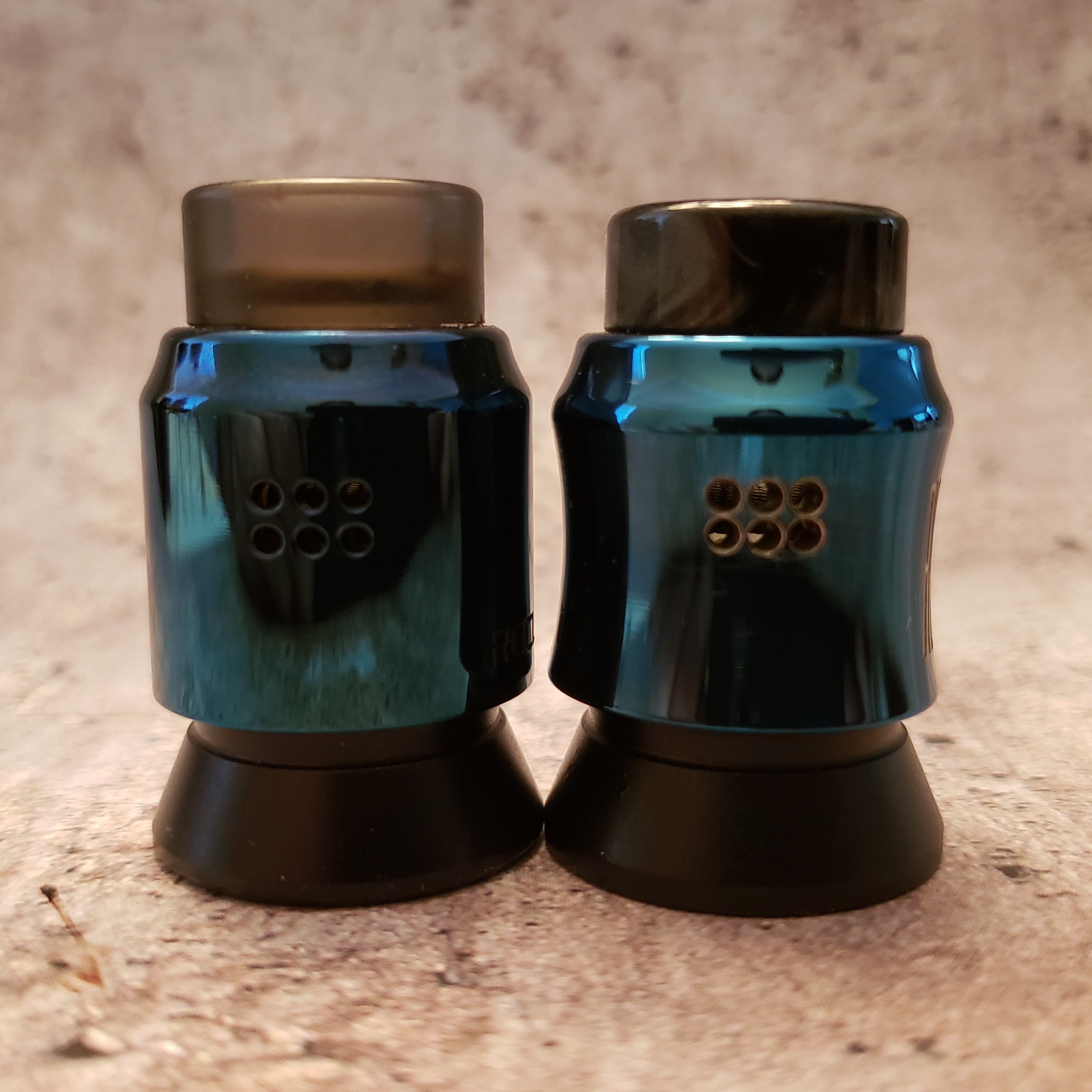 The deck of the new dual shares the same curved with honeycomb airflow deck of the original, more space of course, a bit too much if you ask me. Philips or standard screws, hex screws would have been nice to include as spares. Protruding 510 pin so it is hybrid safe 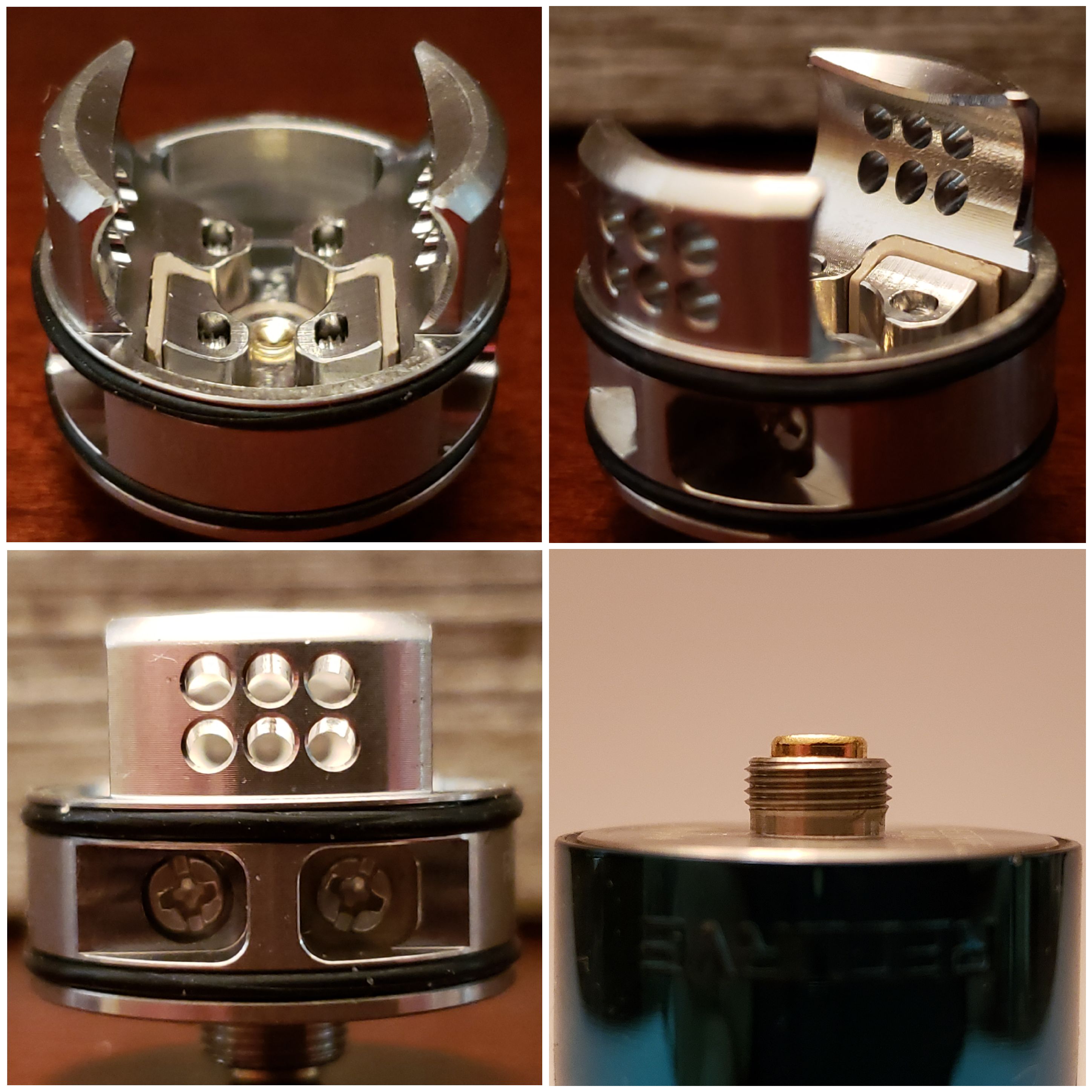 Comes with a coil trimming tool that is an interesting design I had not seen before. This one has a 4mm base and (6) 1mm slides that can be stacked or used separately. Want a 1mm cut on your leads for some reason you can do it or stack them on top of each other for up to a 10mm lead cut. Range from 1m to 10mm I have not seen before, pretty cool. 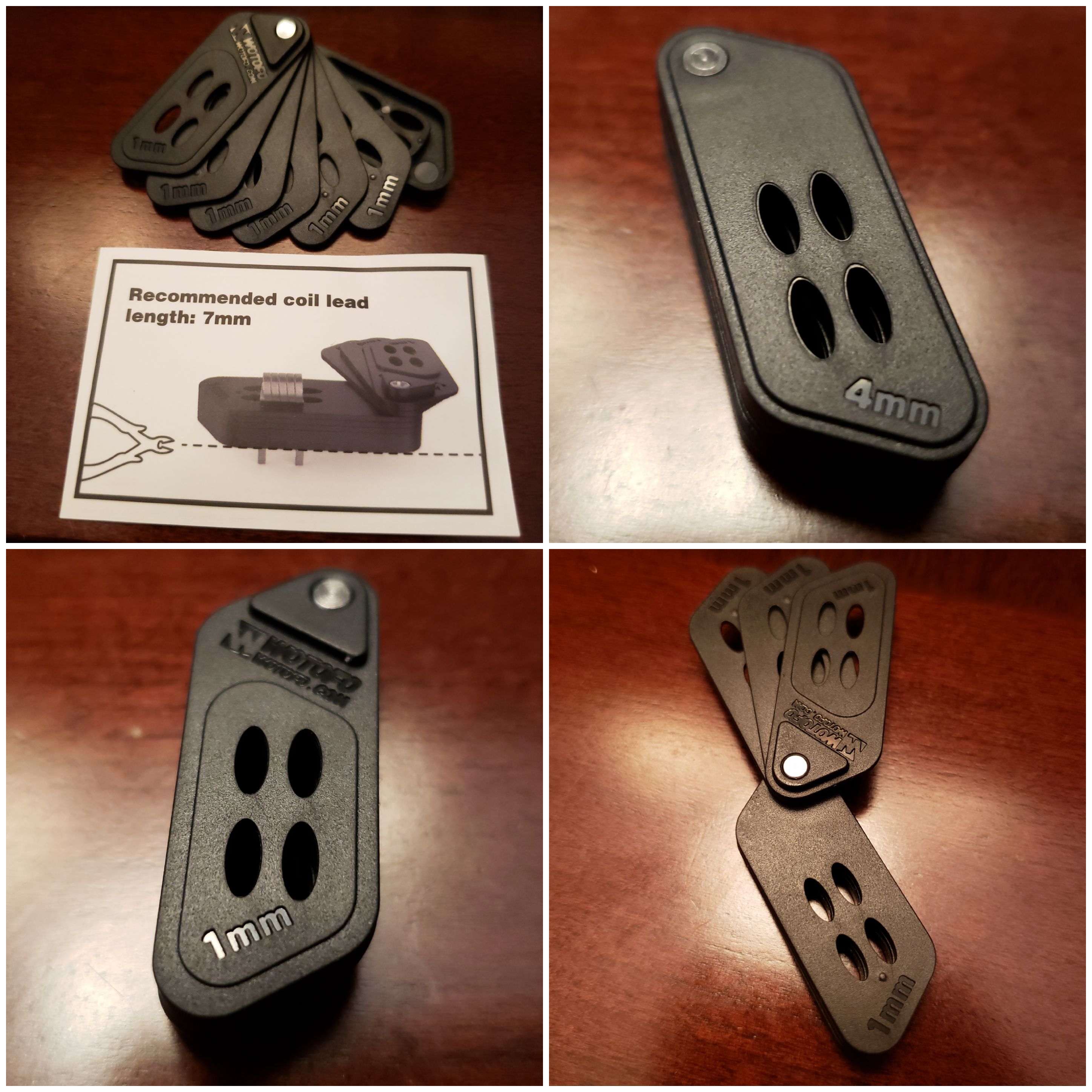 Started off with a build I am familiar with, dual quad-core SS316L claptons, 3mm ID. Right away there was a problem, ohms jumping. Checked that the screws were tight and everything seemed fine but still had my ohms jumping as can be seen on my Coil Master build station. Took those out, still could not figure out what the problem was but decided to go with the included coils and success, no problems there. Leads were cut to the recommended 7mm. 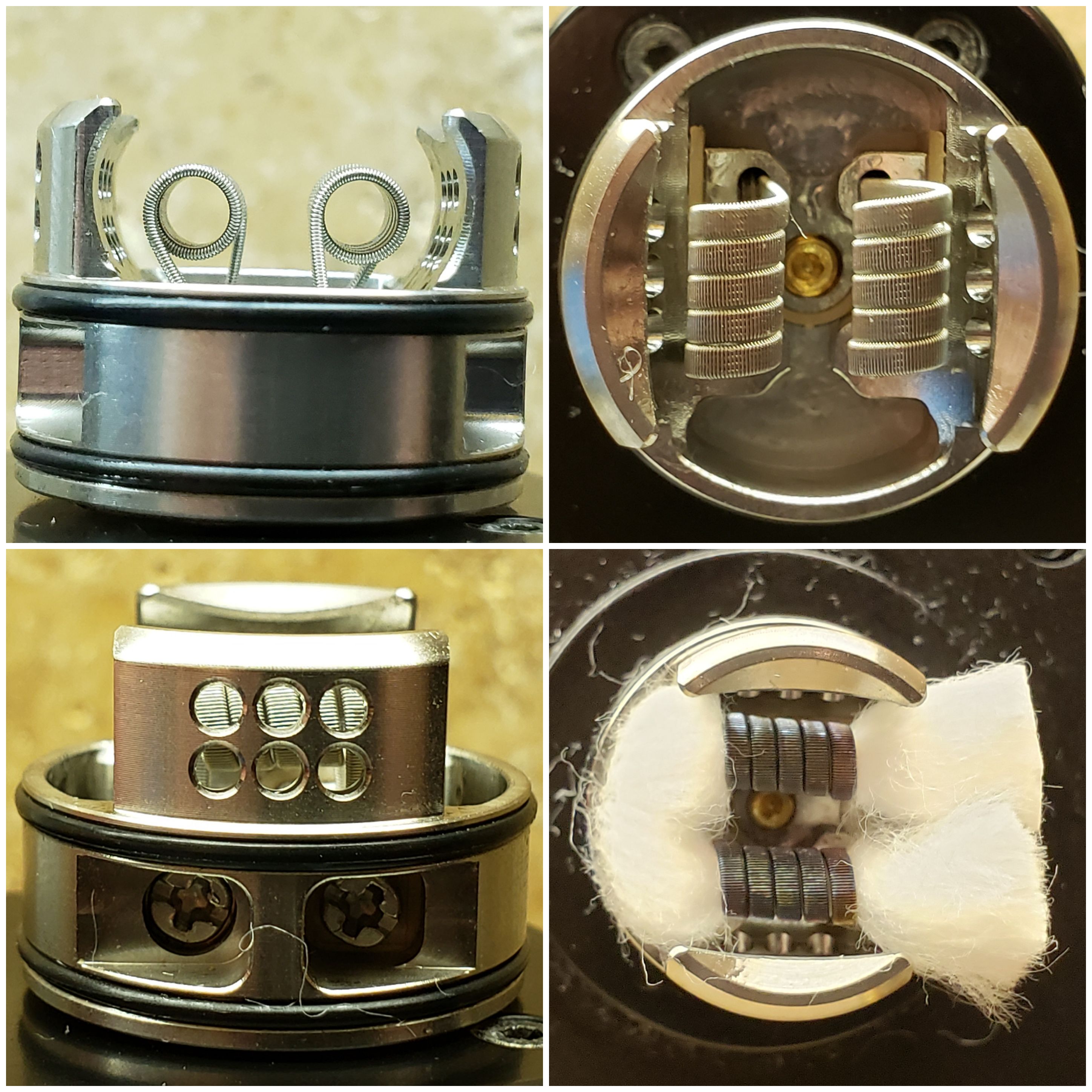 Worked fine, no more jumping ohms but the vape was just OK and favor was so so, not impressed. Tried a few more 3mm ID builds but nothing wowed me, it was just a pedestrian vape.

Decided to try 3.5mm ID coils, this deck is big so cramming bigger coils normally equates to a better vape as it effectively reduces the space in the deck. I had another reason to do this as well which I will get to in the squonking section. 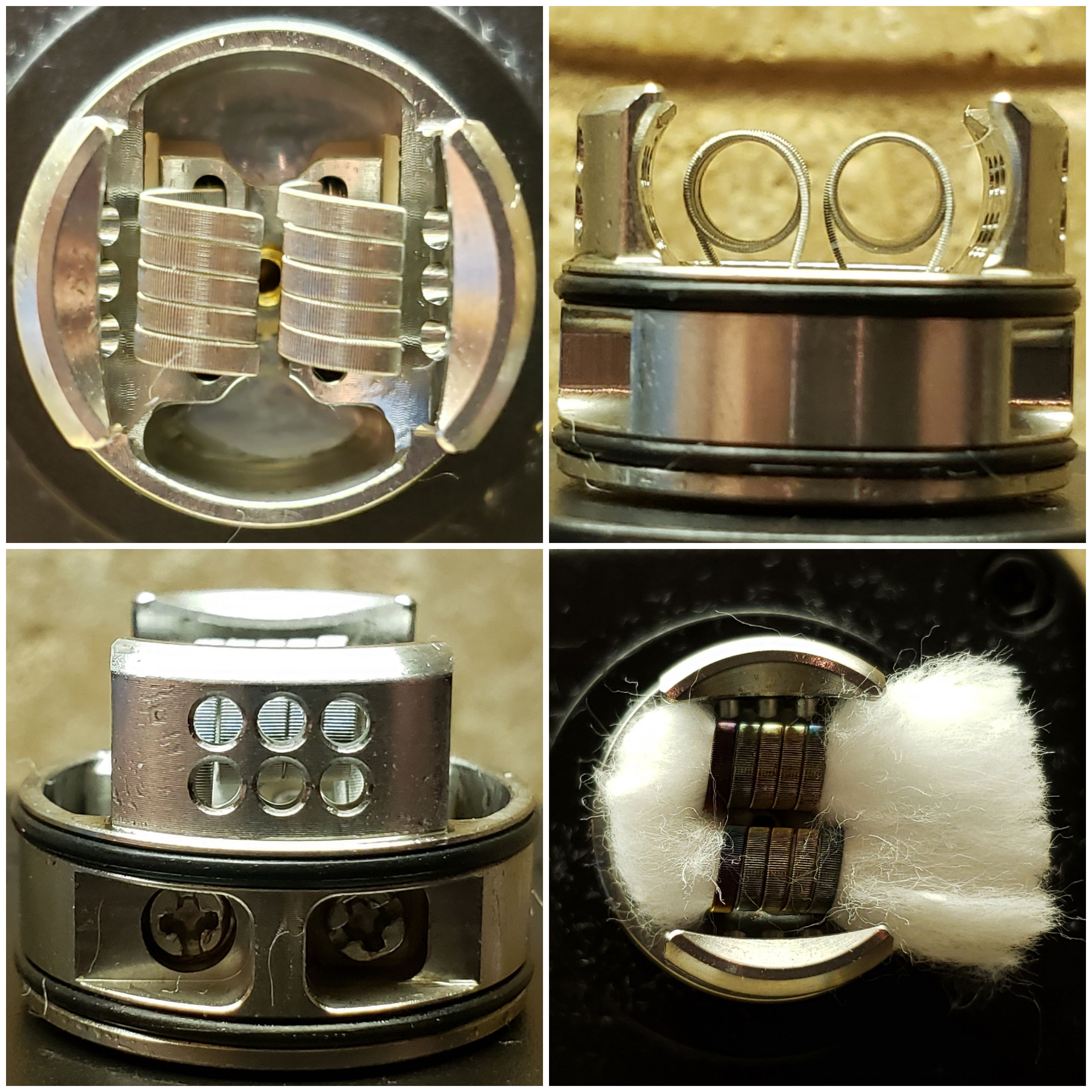 6 cores of SS316L 32G with a 38G wrap, go big or go home! Definite flavor improvement but had to keep it in TC, if not boy did it get hot. The Recurve Dual went from a mediocre RDA to a decent one, not great but much better with the big build.

I did try some quad-core N80 claptons with a 4mm post, figured why not, maybe this takes it to the next level? 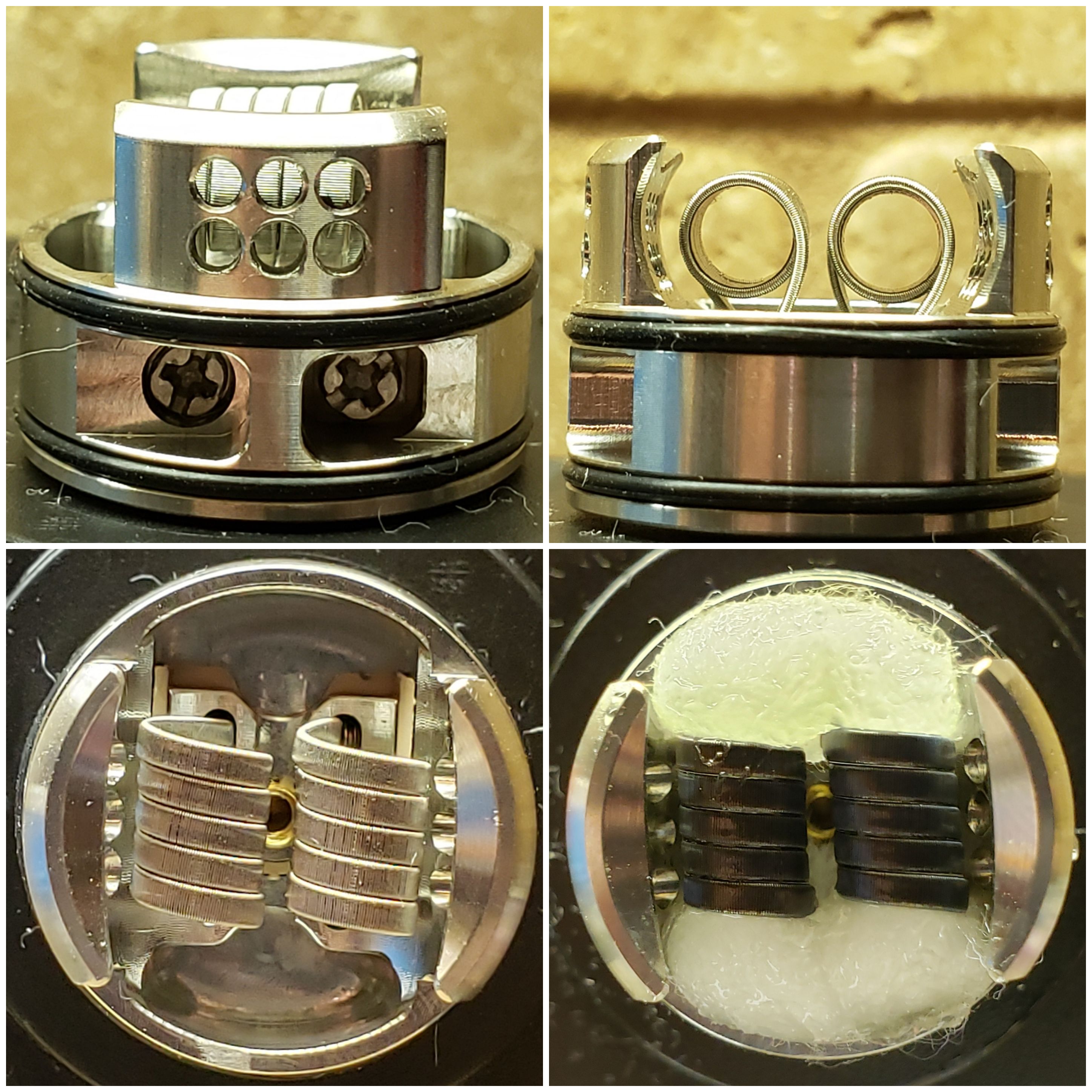 To combat the excessive heat generated with these bigger builds my trusty pal Jim drilled out the bottom holes and commented that it definitely helped to cool off the vape. He used a 5/16ths drill bit so I followed his advice and dammit if the man doesn’t know his stuff, much better and bye bye bacon lips. 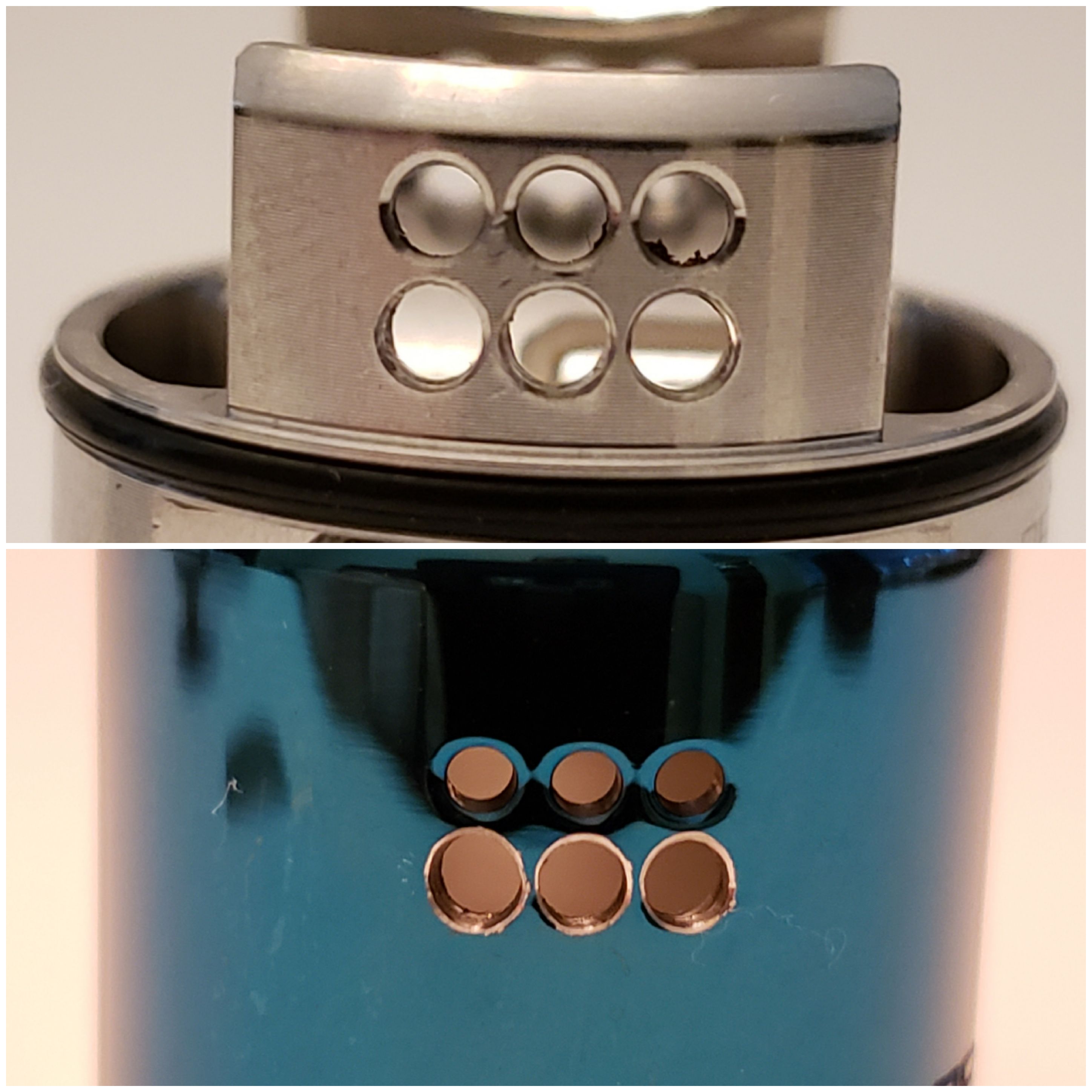 I did try some big single coil builds but none of them worked out so well, the deck is just too big for that.

When I installed the squonk pin the first thing I noticed was damn, there is no diverter, it will just shoot right up if you purge the squonk bottle. I installed it when I had 3mm builds in it and yep, got to the end of my squonk bottle and ploop, a shot of juice went flying up and landed on my shirt…grrrrrrr. That is one reason I decided to try bigger coils, not just for hopefully better flavor but to crowd the squonk pin a little more to prevent another juice eruption.

The pic was taken of the 3mm prior to installing the squonk pin, comparison to show the placement of the squonk hole in the deck. 3.5mm build on the bottom. 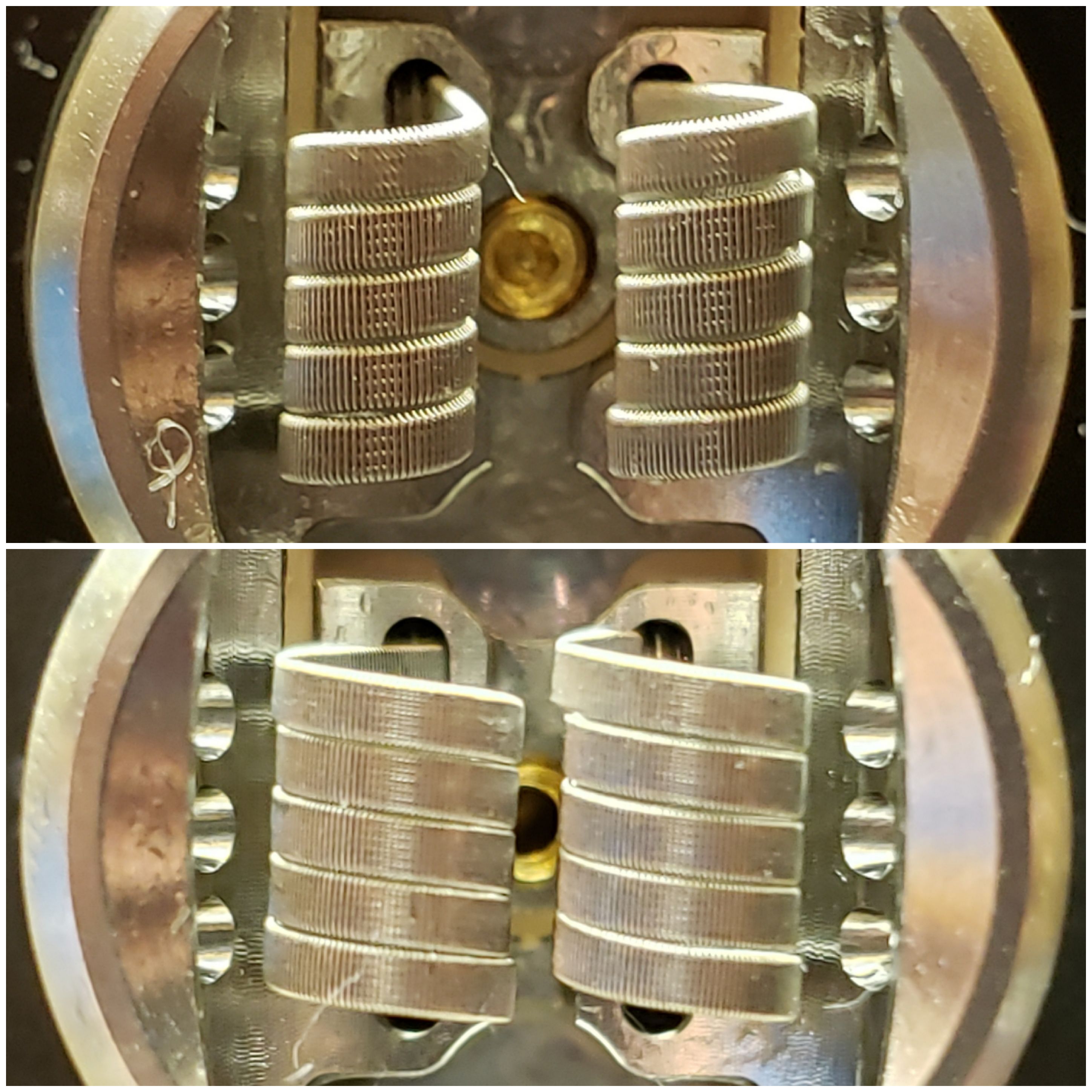 Now that helped it but not completely, still got another juice purge but not as bad, this time my shirt was saved. Bad design on their part, should have had a diverter on the squonk hole to prevent purges. Personally, I would not use the Recurve Dual on a squonk mod, your just asking for a mess. 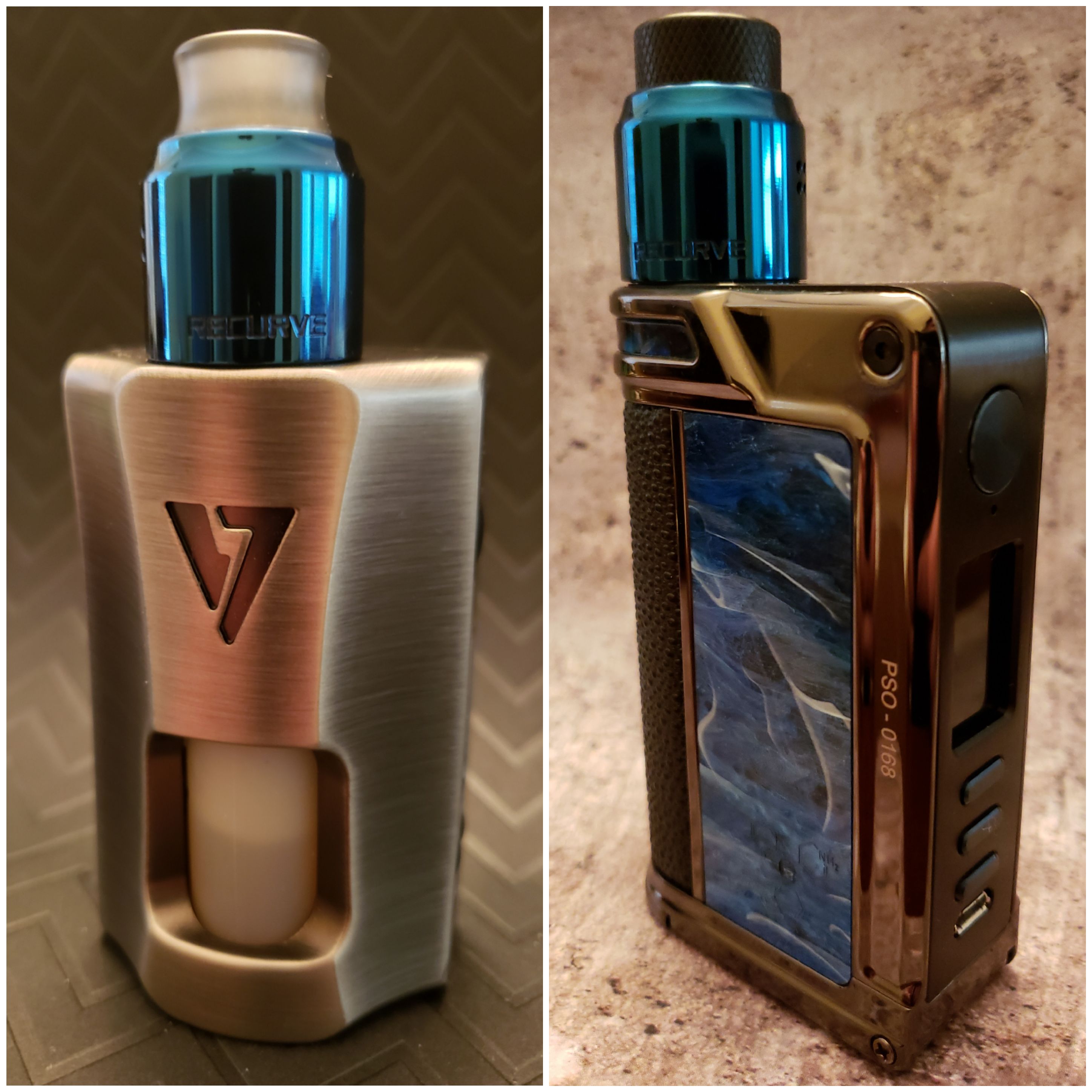 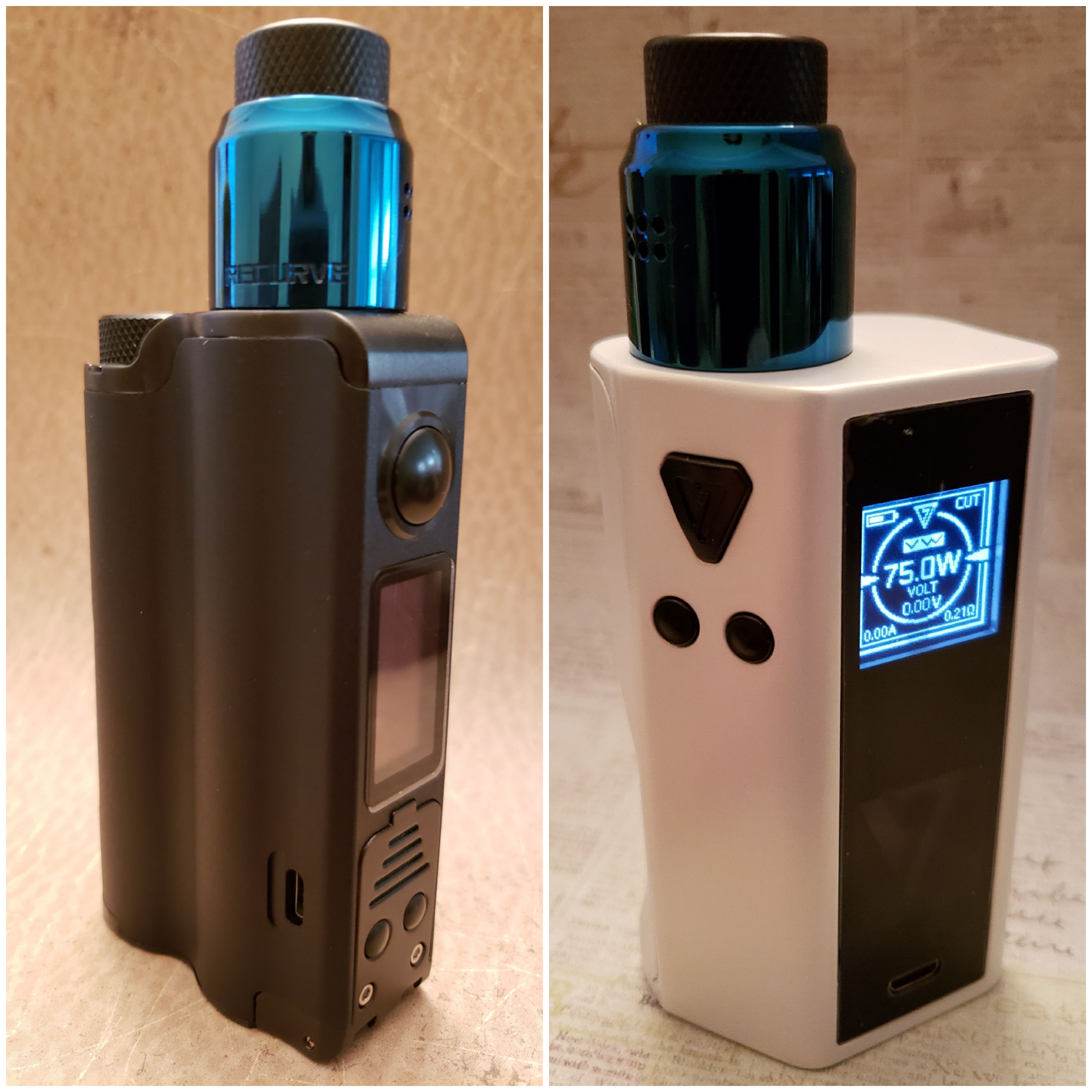 And check out this matchy matchy, looks like I finally found a matching blue for the Dovpo Trigger! 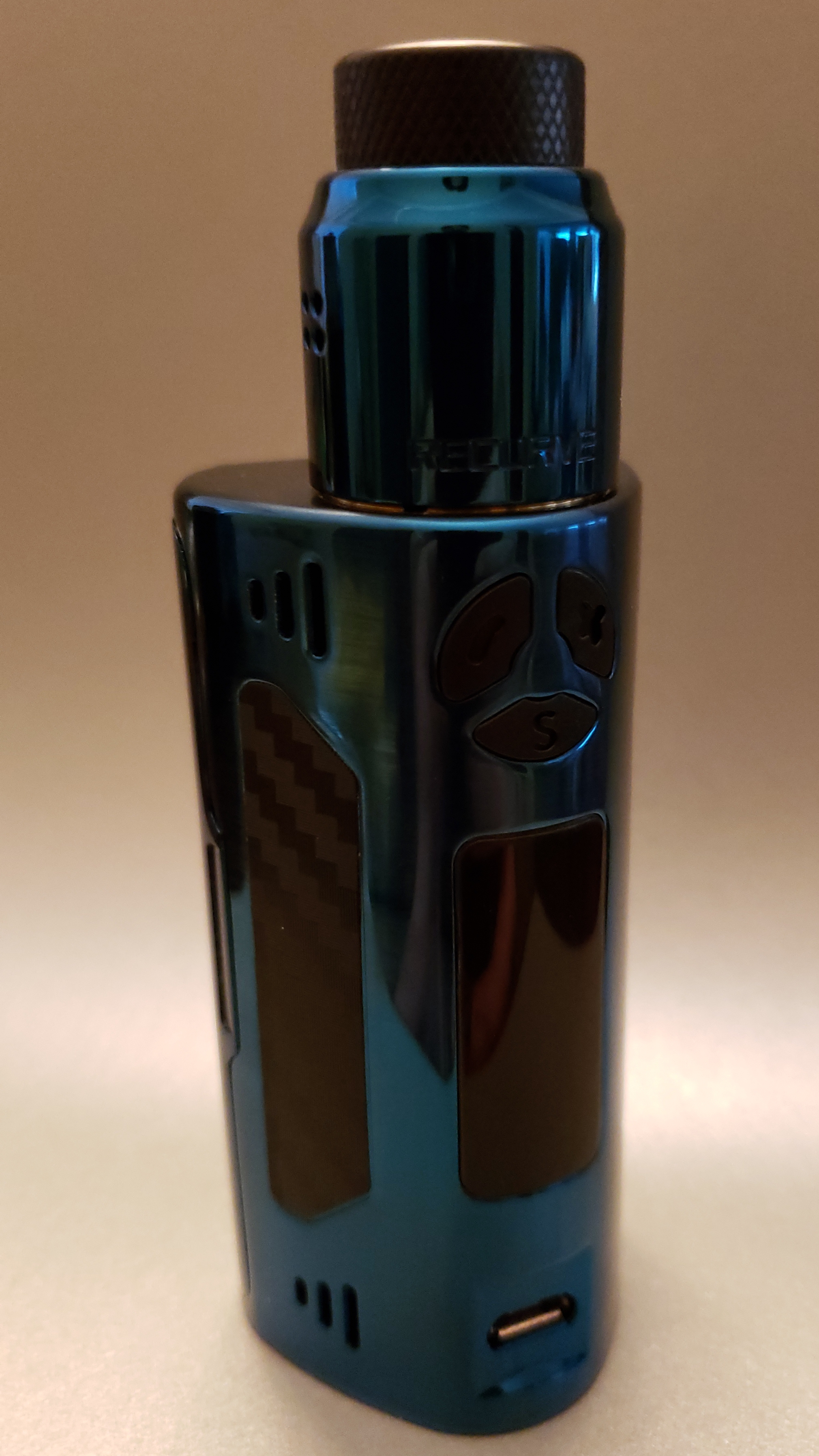 Sitting here looking at the Wotofo and Mike Vapes Recurve Dual RDA the one thing that comes to mind is they could have made much better design choices. A big build deck is cool for those that like big builds but then those with normal 3mm dual builds the performance suffers. 3.5mm builds worked the best for me but then it can get pretty hot if your chain vaping, enlarging the bottom 3 holes really helped though. How did they not put a diverter on the squonk pin to prevent juice purges?

For the reasons above the Recurve Dual is not an RDA I would easily recommend, especially not for those that want to use it on a squonk mod. I would recommend Wotofo’s Faris RDTA/RDA over the Recurve Dual, better design and more versatile.

You can find out more by visiting Wotofo’s website: https://www.wotofo.com/pages/wotofo-recurve-dual-rda

great review brother. Glad I waited to buy this one. I was hoping on an improvement on the original single coil, but I guess it isn’t much of one. I will try drilling out the air holes on my single and see if I can put it into rotation.

Let me know how it goes with drilling out the original. Since I did that it has been on my Aspire Feedlink squonk mod and I have a hard time separating the 2.

I don’t think I had room to use a 5/16th. I actually used a carbide bur for the original, cut through better without catching like a drill bit would. It was probably about a 1.8mm bur, as I am unable to get a 2mm post through the holes and 1.5 is loose. If I can find the bur I used I will measure it and take a pic but about to hit the sack so will check it out tomorrow.

Great review @mjag. As always, never get tired of HONEST opinions, and there seemed to be more than a few issues with this one. Great idea on poking out the holes. The splash back, and coil pickyness not withstanding, I think “they could have made much better design choices” about sums it up.

Great review! I have the Recurve Dual and I agree the airflow needs to be more open - but I’m not motivated enough to drill out any holes

I squonk it on the Topside Dual and the reason I bought this one was for the way it squonks - I squonk to drench the bottom of the coils, it works great for me. If I over squonk, I simply take a big hit without hitting the power button in order to suck out all the juice from the bottom holes, then it’s good to go for a few hits.

Thanks brother. I did read a few other reviews after posting mine and the opinions sure do vary, looks like a YMMV type of RDA. For me there are other dual coil RDA’S I just prefer a lot more with less compromises. Everyone has preferences though, just gotta be honest with my own.

Thank you @NoProblem . I am a fan of the Drop RDA as well, have had 2 for a while and just added a 3rd via a closeout. Always have one Drop with a single and the other with a dual coil. The Drop really beats the Recurve Dual when dripping, can get much more into the Drop. Love the flavor on the Drop as well, might not be the pinnacle of flavor but close enough that it is still a go to for me. Happy that the Recurve Dual is working out for you.

@Lostmarbles I don’t have the bur I used for my Original Recurve anymore but recall I had some 1.7mm. I was mistaken when I said it was a carbide, it was actually a high speed steel bur. It looked like this, these are some 1.4mm I still have but they are too small. 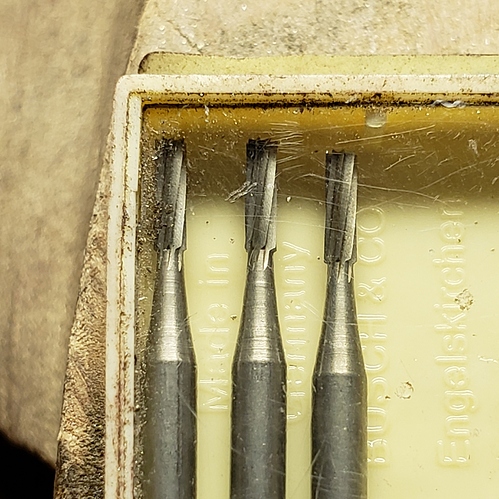 If I did it over again I would have only enlarged the bottom holes first then tried it out. That might have been enough airflow without doing the top as well.

@mjag thanks for the great review.

I gotta say the the Same as @JiM210, Great review, and I wouldn’t have found it if he didn’t bump this thread.

All in All, kinda makes me glad I passed on both the Recurves

Thanks Rocky, appreciate it bud.

The original Recurve worked out better for me when I drilled out the bottom airflow, @Jim22 clued me into that.

I am grateful if the info I provided helped anyone make an informed decision, that was always my goal.

Sorry, I am an adult, really.
I think the main reason I like your reviews so much is that we think a lot alike. I agree with all of it! Every word! So I decided not to quote the whole review because you already wrote it.
I would almost be willing to use it with the matchy matchy mod…

Yeah, we do think alike and that combo does look good.

I think the main reason I like your reviews so much is that we think a lot alike. I agree with all of it! Every word! So I decided not to quote the whole review because you already wrote it.

@Dan_the_Man, I couldn’t agree more with your assessment of @mjag.

I did enjoy doing reviews but just don’t have the same schedule anymore. A lot of great reviewers around these parts though, you and @Dan_the_Man included. I appreciate what you both do

Thank you very much @mjag, that means a lot, especially coming from you. Thank you.

I wonder why this came up as a new post for me and when I posted it showed that nobody else had posted yet. How strange is that?

Now that I think about it, I do remember when you posted this and I decided not to read it because I dislike the recurve and figured I wouldn’t like the improvement. I’m glad I read it though…