Youtube: Airflow in RDA's and around different coil types

If you haven’t already discovered this yourself, then there a new series of Youtube videos that I will highly recommend to anyone even the slightest bit interested in building their own coils.

They are made by a Norwegian named Morten Oen, and he has build a small “wind tunnel” kind of chamber, where he test how air flows inside an RDA, how air flows around different types of coils, and what the optimal coil placement is in different RDAs.

In his newest video, he has dropped his normal 10:1 scale chamber and is instead using real coils, to test how the surface of the coil influences the airflow. It is all very informative and contains some surprising conclusions.

You found it on your own!!! Bravo!! It hasn’t come around on the other forum again yet.

By the “other forum” I assume you mean reddit?
That was where I originally discovered his channel, though I suspect that he isn’t too keen on posting there again.

No, I discovered it on ecf, lol. elr is always the last to the party.

Found his post a few days ago on ECF. Interesting guy, great beard. Cruised thru his yt channel for a bit.

Very interesting channel.
Now i use flatwire and works great for me. Also my wick is very hard now. lol Don´t missunderstand me, please.

The videos about the airflow in different RDAs…I don´t know…maybe in a postless deck…but in all other cases, i think the influence of the clamps and stuff should be taken in considerationen to get true results.

Take a look at his videos and let´s discuss. I´m very interested what other people think about his work and his conclusions.

The videos about the airflow in different RDAs…I don´t know…maybe in a postless deck…but in all other cases, i think the influence of the clamps and stuff should be taken in considerationen to get true results.

He does take post, chamber size and sometimes even the wicks into consideration, he just rarely duplicate in in his air chamber. He only replicates and test the part that he is interested in testing. But if you look at his air flow drawings, then they are accurate scale drawings of the whole RDA, not just the air ducts and coils, and the posts play a large part in his coil placement recommendations.

IMO there is really no reason to doubt the result of his tests or the conclusion he draws from them. Taste of course differs and his preferences aren’t necessarily the same as your own, but he does try to differentiate between preferences and science, though you sometimes have to pay close attention to spot which is which.

Now i use flatwire and works great for me. Also my wick is very hard now. lol Don´t missunderstand me, please.

It is pretty much the opposite for me. I still prefer claptons (but the smooth kind with 40g wrap wire) and I have pretty much always wicked very tight, but I have learned a lot about air flow and coil placement by watching his videos. His latest video even confirmed something about 90 degrees turns, that I have suspected for awhile.

I really enjoy his video’s , there is another thread about Oen on here.I love the way he goes through each rda and explains how to get the best flavor.
I also love his wicking video’s and have implemented using a much tighter wick and am happy at the results.

I had not watched all his videos yet. I have to watch the newer vids.

Damn, just when I thought I had my shit together, for flavor chasing , Someone comes up with most simple but complicated answer, streamlined flat coils with dimples, being a golfer myself, I see the big picture.
Headed to my shop for my pallpen hammer and anvil.
been flavor chasing since 1-1-13

I have used a jewelers anvil and brass hammer for gun smithing sometime ago back in my mech mod days before I found the flat wire from Kidney Punch.
I seriously doubt I can wrap with 40 ga. but understand fur surface geometry he’s talking about. It must be why I get the flavor changes when I wrap triple twisted with flat or square wire or use Vertebraid. It’s a pretty rough surface that must be creating the turbulence that changes the top notes. I also try to place the coil as directly as possible to the air channels as high as is practical considering the length of the cotton tails.
Very informative videos and my thanks for providing the great content!

@IzNoGoat VERY good video and information. I never stopped using simple single wire coils in my Steam Crave because I just got great flavor. I see all the big, fat, fancy, multi-wire, looping, cluster bomb coils out there, and they sure LOOK nice, but after watching this entire video, I feel a sense of validation.

I found the later part (video not still shots) wherein he moved the flow up and down, to see the difference in the “simpler” coil to be amazing to say the least. Less is more ?

Using a double square wire twist core with 2x.2 and a wrap of square 3x.3 I believe I’m in the ballpark of his turbulence surface. It’s wrapped at 3.5mm with a tight cotton wick.
I’m thinking about rigging my little 1 hp as airbrush compressor with a bladder of plumbers smoke one day to check out the airflow myself

I’ll see how this is with some of my familiar vapes for flavor differences. 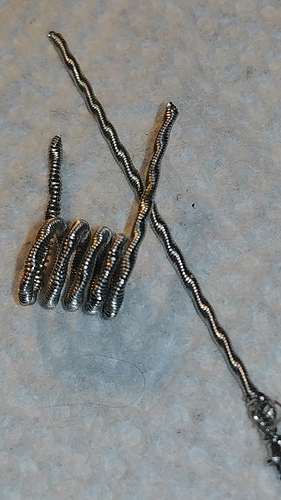 OK, we’ve all seen it. No disrespect to Morten Oen, he’s a great artist but when it comes to the science aspect of things… I’m still not convinced

Watch a real RDA in action though. Bonus points for picking out the differences with Oen’s videos

The difference is that TM isn’t putting any science behind it, he just wants to show what happens inside an RDA. MO takes it a step too far IMO by making conclusions based on incorrect representation of what happens. He isn’t working with replicas (not just talking about scale), so the environment in which he operates is different. His coils don’t heat up etc.
MO makes nice art (and all respect for that), but reinventing the aerodynamics wheel he won’t do.

If there is any problems with what Øen has been doing, and I don’t agree there actually is, then it is that he also mixes in his personal opinions both on the RDA’s he is testing and his general preferences, and many people has had difficult distinguishing between the facts he uncovers and his opinions.

I have to chuckle a bit here. We’ve known for a long time that airflow is important. Hence why with side airflow rdas, at least for me and my builds, I find placing the coils as close to the inlet is better. And also why good reviewers test out placing the coils low middle and high. And on and on.

The only difference is drawing a diagram and verbally “thought processing” it out vs an accurate’ish test model. For which TM delivered.

Just a thought. Not meaning to poo poo on ya.