When I first opened the package and held it in my hand my first thought was this thing is small and cheap. It has a small deck and the metal and glass is thin. (Thank god it comes with an extra tank). But now after my fourth tank I’ve come to realize this tank is awesome. IMHO it’s better than the Goblin (first release) and the Lemo 2 when it comes to flavor and vapor production. I’ve been vaping a max vg juice and didn’t get any dry hits until I reached 60 watts. It has a ton of airflow too. Maybe because it’s so simple I underestimated this tank, but this tank puts out. I mounted it with dual 5 wrap claptons @ .21 ohms, vaping @ 43 watts. I did notice that the tip does get a little warm, so I put a glass drip tip on it and it fixed that problem. I would definitely recommend this tank. It’s truly deceptive and much better than I originally thought it would be.

Edit: I haven’t used the prebuilt coils yet. 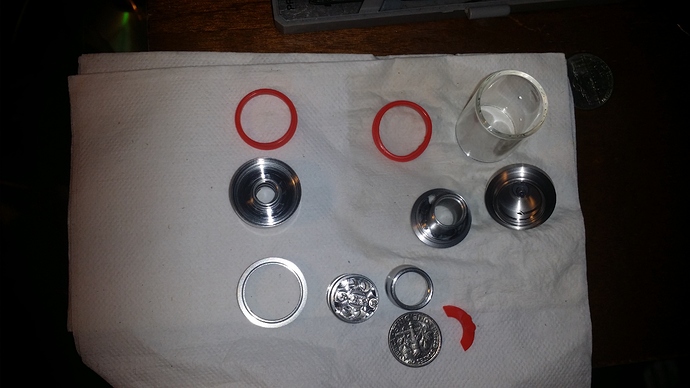 I wonder how this stacks up to the Horizon Arctic (which I really like) - I was just about to pull the trigger on a Zephyrus tonight, but I let it go with “later…”

how this stacks up to the Horizon Arctic

I don’t own a Arctic so I can’t comment on it… but I must say I have used only this tank for the past 24 hrs. and it get the job done. It’s easy to use and has a very satisfying vape. It’s really different to me because it’s not big and bulky like the other tanks I own, but it vapes just as good if not better than some. I must admit I like the rebuildable bases more than prebuilt coils. I would say wait until you find one under $25 and get it then if you’re interested.

hey buddy have you seen one of these for under 20 bucks I’m trying to get my hands on one but have a PayPal credit of only like 21 bucks and this sounds really nice for a few bucks…
have you tried a single coil on it?

from where… I’ve seen it but not w free shipping?

but not w free shipping?

Mutation X MT RTA: How do I explain just how incredible this tank is?

Thanks for the post. I’ll definitely order one of these. After my disappointing buying escapades lately I need a winner. It all sounds great… Thanks again. I found some In Stock… Mutation X MT RTA - by Indulgence $29.99 free shipping [image] [image]

Pretty small deck for claptons… What ID you use?