Anybody using Joy as a sweetener?

I’ve been using Joy to sweeten my recipes lately. Of course my taste buds are shot, but it seems like I’m getting a strange after taste. What’s your experience?

I’ve used it in a couple mixes but I haven’t quite figured it out yet. I’m gonna have to try it as a standalone and maybe I’ll know which way to go with it then.

I think it has a slightly weird aftertaste as well… Hard to describe.

I have also used it in a couple of mixes, namely a peach/mango and a milk and honey juice. Both juices seems to meld well with Joy and I did not get a bitter taste. My step daughter will be testing a third peach mango blend that I added Joy to later this afternoon when she kills off the current tank she is using It is based on “Flow State Peach Mango Cream” which tasted weak, so I upped the mango a bit and added Joy:

For ELR-forum use “Copy as simple text”

Understood, but that wasn’t copied from ELR

Receiving JOY tomorrow il get you back on this !!

The closest thing I can relate the ‘weird’ taste of Joy to is powdered sugar. I swear that is what they were going for…a funnel cake with powdered sugar on top. But, that’s just me.

I haven’t quite figured it out either, but I admittedly have not done much with it yet.

I swear that is what they were going for…a funnel cake with powdered sugar on top.

That’s exactly what I taste too … It’s very yummmy!

I just got Joy in last week and have only tried a couple of recipes with it so I’m still not totally comfortable with it. I did find the cake flavor mellows a bit after it ages a couple of days, but that could of just been the mix I used it in. I think it would make a great sweetener in bakery, nutty and possibly tobacco recipes but probably not so much in a fruity mix.

Edited: I could be (probably am) wrong on the fruity part.

HIC says “Everyone DIYer who likes sweet flavors needs this one. Vape it standalone, then add a touch of your favorite fruit (or spice - Cinnamon Ceylon is good with it), then see how it works in your recipes. Try it as a sweetener for strong fruit flavors and bakery recipes”.

I reread your post and see it didn’t address your question … No, I don’t taste any weird after tastes with it, but my taste buds are shot too. My wife however did comment that she didn’t like the after taste and she has very good taste buds. It took about 5 seconds for it to hit her and she made a funny face when it did … lol. I wish my taste buds were as good as hers!

I’m wondering if it’s one of those weird things that some people can taste and others can’t. One of the things we did in school was the PTC taster/nontaster test. I wonder if there’s a correlation there.

I havn’t tried the joy, but I see alot of people like the green apple from TPA I think it taste like strong chemicals even at low percentages. So taste must be really suggestive.

I haven’t tried it yet but a lot of people say it tastes like fair funnel cakes? That was enough for me to order some! I had no idea it was sweet enough to use as a sweetener? Is it comparable to marshmallow in the regard? I’m wondering if I should reorder it or not now…

I think I’ll still get a small bottle since there are so many varying opinions on flavor…almost like oba oba. I usually don’t do the bakery vape but I’m pushing myself that way and funnel cake sounded like the perfect intro!
mmm…funnelcake…
Why thank you professor

I used the Joy in the recipe below with success and had no odd flavors popping out to offend the palate or nose; then again there is a lot going on in this mix. Quite tasty actually. 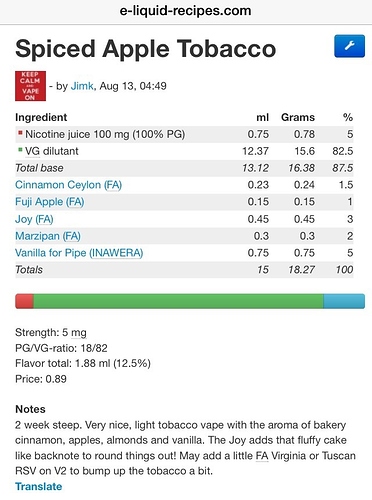 I would suggest throwing another tobacco in the mix; the vanilla for pipe is delicate and was just a hint under everything else.

Def gonna give this one a try this week or so looks great!

I Am seriously on the fence about Joy as of now. I keep getting a funky cool effect at the end exhale ( does not sway flavor profile however…just weird)

I like where your going w/ this…I do believe I will attempt to use it in the 0.4=0.8 range and see how it turns out. For now I am not getting that desired "funnel cake " experience. Has anyone hit it on the head to get this to stand out and if so was there a mixer used w/ it to bring this out?