I used to enjoy looking at different reviewers to see what new hardware was coming onto the market.
But I’m sure that since this vape mail ban a lot of interesting viewing has dried up,and I don’t just mean in America.
Everything seems to have slowed right up to the point of I’m lucky to watch one review in a week that I’m remotely interested in.

Flavour opinions are always interesting but I find myself watching reviews that I’ve saved. There used to be umpteen products released each week but alas those days appear to be gone.

Maybe it’s just that the devices have reached a point where innovation is not so easy anymore. Or was there anything the last year that was never seen before and not just refined versions of existing tech?

pods taking over the market ?

It really is dry out in the vape world for new stuff, only have 1 hardware order coming in from the Memorial day sales which only includes the new Geekvape Z Max subohm tank, the rest of the stuff in that order is just stuff that has been out a while, coils, and cotton.

I know a lot of companies just called it quits, at least hardware mfg’s in the US. China is also getting pushback so one only knows where that might go. Sad times indeed, the only new thing I can think of in the horizon is new mods with the new Evolv DNA100C.

There was one RTA from Germany IIRC that was innovative $165 and probably cloned by now but I haven’t looked because my own outlook has been slowed down after this whole ban thing. Instead I directed my attention to more DIY. Only recently did I buy gear. One new to me (a Drag X Plus mod) and a Taifun GT4 clone from FT. Also a top fill conversion tank for the Dvarw MTL FL. I have to admit, though, doing that kind of stoked the fires again. We’ll see. Btw, I had no problem using my Visa card on FT even though the credit cards are powered by Paypal. And there was no foreign transaction fee even though that card has them.

I also think on top of that there’s an element of exhaustion with new gear that is effectively the same as old gear with a different look.

I have so much high end gear as well as
inexpensive - and I started thinking , ok I passed the savings from smoking. And I spent a lot on the hobby but that’s about it.

The trend for me was mostly stopping in about 2016. While some of these tanks do carry different flavour profiles based on the juice. I feel like I have it all covered now. Really it’s about style at this point. Maybe size.

About the only thing I want now is maybe a berserker v2 and a nice mod to fit 24mm - I won’t buy high end for that. The cheaper stuff has refined so ouch now even many of the high end mod
Makers have had to drastically lower prices

Anyway. It’s a hobby and it’s become difficult in the USA. So people are moving on from the hobby side and use what works. apparently teens are movong on to cigarettes immediately, as expected.

There’s a wholesale vape shop Im lucky to be able to buy from because my nephew had an e-juice business which got shut down but his license still allows him to be wholesale… ANYWAY…
I go in and there’s the girl I always work with, and she’s sucking on a disposable pod device. (Used to have full Aegis rig etc).
Pods are the snapchat of vape.

Your right, walk into a vape shop now and all the employees are vaping pods. Pods do have a place in vaping, carry around one in the car when I need to be discreet but damn, all the time! No way!

@Aphonic I agree, how about a new shape other than the Thelema, Centaurus, Paranormal shape? They are just stuck, I would love a DNA250C that is shaped like the SXmini G Class but nooooo. At least the Odin and Riva came in a different form factor but Lost Vape is stuck in the same ole same ole.

I think the mods have been a lot more impressive lately than the tanks - over the last 5 years. All the tanks now are either blasted or high polish. More or less similar. And really all you can tweak is air intake and the dome. The new aspire tank that has like 49 options for air flow is probably honestly the be all end all for someone who wants ONE RBA.

You’re right on the mods, outside of high end cool sculpted wood mods for £500.

I have a lost vape therion bottom feeder. It’s more or less identical to the Centaurus and paranormal and much older. I really like it but it’s heavy and the part which separates the bottle and battery broke becusse it was very poorly conceived. (Not sure if I can get another but it would be nice)

The thelema is a plastic stick mod basically. But again, refined.

I’m dating myself here but a wae / gem combo is still very very good looking to me, as is the piccoloid.

I have the 350m class- again I never use it because it’s too heavy.

I must have spent 2k in gear and I use a cloud one and I stick pico most of the time. Lol. What’s wrong with me.

Here is my favourite for flavour but it’s a little finicky for wicking. It’s the above mentioned combo. The photo makes it look very beaten up. To the naked eye you don’t see damage, though the tank needs cleaning.

Oh also I bought a frenzy pod system. Worst device I’ve ever had, and it’s just a modernisation of the egrip. The caliburn I use and like for high MH salts but man, buying pods kills me.

Beautiful set up. I’m not as familiar with these devices. Are you in the EU? Oh yes, I see that you are. I was going to offer one of my Berserkers to you. I might have two V2s but it’s probably not worth the shipping since they can be found in most places and also the classies.

Thanks! Yes I am now but only moved back two years ago. The mark bugs stuff is available in the states, made in Romania. I bought them when I was there.

Thanks for the offer, you’re right though, probably worth the shipping. Still - I appreciate it.

May I ask why you’re getting rid of one? Did you find something you prefer?

I just built the above setup, it’s been a long time because my adv was too thick to use it the way I vape (several sequential hits)

I have to say I’m once again blown away with the gem (tank part). If you look at the mark bugs site you’ll see why it’s so great, the chamber is about as small as you can get and still have a chamber. So much flavour. I’m really glad to be here making my own juice and able to use them again!!

May I ask why you’re getting rid of one? Did you find something you prefer?

I have a plethora of tanks plus a friend sent me a box of MTLs with Berserkers in it. I would have to look but I think there might be two V2. One would be adequate for me with all the others I have.

I have to say I’m once again blown away with the gem (tank part). If you look at the mark bugs site you’ll see why it’s so great, the chamber is about as small as you can get and still have a chamber. So much flavour. I’m really glad to be here making my own juice and able to use them again!!

I actually did that after seeing your post. I was just starting out in 2014 and that explains why I wasn’t familiar with it. Although, I knew about other things like Provaris because who didn’t, there were Provari enthusiasts all over ECF et al.

They have released newer versions. There’s a pretty inexpensive one which takes nautilus coils even now, though you wouldn’t get the same experience I doubt. They have a small or light version too. The one I truly love is the titanium which I put on my minimus. That’s. Pretty nice combo but it’s hard to leave the house with $800 worth of vape gear, for me at least… I wonder if my renters insurance covers it

I’m in the same boat with tanks. If you like mtl and ever have a chance to grab a go piccoloid, there’s still nothing like it. I use kine for high my salts. It’s phenomenal.

Have a look at this - I don’t know how many people would get rid of them but even the steroid tank on any other 16mm mod like the mini ego would work. 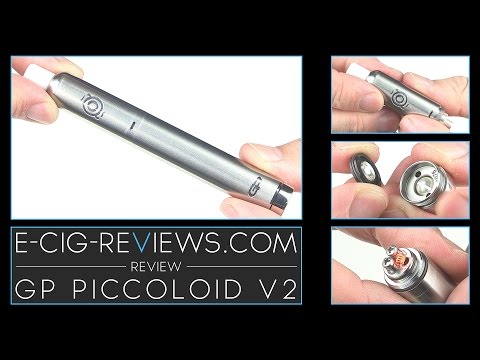 Anyway that’s the stuff I use, I stopped haing a lot of tanks due to height and weight. Like the bigger version of the piccoloid called the hnp. It’s amazing but unless I need something to load my fist on a late night walk home through london, it’s heavy.

Nice looking and I like the deck, it reminds me of the Silverplay 24 the way it wicks. Kind of an upside down Hurricane deck