You will get the longest battery life from:

3 batteries with 3000mah each will give you a total of 9000mah, which is more than you get from any of the two battery options you mention. The actual calculation is a bit more complicated then that, and also include things like internal resistance and other factors, but the result is the same.

Battery life depends on the combined mah of your batteries if you stay below the max CDR (continuous discharge rate). So yes, 3pc LG HG2 should theoretically last the longest. The age of your batteries and how they’ve been treated can also play a big role.

For accurate test information (which may differ from theoretical values), check out Mooch on e-cigarette-forum as well as his youtube channel, facebook and wherever else you can find him.

I’m going to go out on a limb here, do we know for sure if the OP was asking about the quantities as well ?? Almost looks copy/pasted from something.

With that confusing question made, I’ve been burned more than a few times by “questionable” brand named batteries. We all know there are only a few manufacturers, and the rest are re-sleeved, so even at face value I’d vote for LG as well.

With that confusing question made, I’ve been burned more than a few times by “questionable” brand named batteries. We all know there are only a few manufacturers, and the rest are re-sleeved, so even at face value I’d vote for LG as well.

That is a most excellent observation. Another vote for the LG Browns from me (the only cells I’ve used for all the years I’ve been at this hobby).

I started with LG Browns and switched to Samsung Qs. That experiment didn’t go as planned. All Li Ion batts have a lifecycle and the Samsung Qs did not have the extended life of the LGs …last order was back to LG HG2 (FTW!) I still have some of those original HG2s I use in my single battery mini-Vapes …they just don’t charge to the max MaH of my new ones but they do still charge and work after 3 years (not recommended)

No need for them to simply be laid to rest… They could have a nice second life in an 18650 flashlight.

18650 flashlights tend to require batteries with deep discharge protection. But not always.

It’s funny, my experience has been different and the LG HG2 was the first and only set I have retired. Instead of 2 days, they only lasted me a couple hours anymore and took forever to charge, to the point where they wouldn’t even charge to max anymore.
I had a set of VTC5 that I swapped with the LGs when one set was charging. It’s still performing strong a year later.

I did have chargers that charged up to 4.26V at the time, which isn’t ideal, but both LGs and Sony’s went in it.

I’ve swapped the LGs to a set of VTC6 and while they’re very good initially, now after about a year I notice they’ve lost a bit and are comparable to my 2.5 year old VTC5. Next set were Q30’s and while initially they may be just a little worse than the VTC6, they don’t fade as fast so they’re actually performing better than the VTC6 now.

Okay – From what I read, when you connect batteries in series, only the voltage increases, mAh stays the same. So, three LG HG2 should give aprox. 12,6V and 3000mAh. If you want to increase the mAh, you need to connect the batteries parallel.

So, if I understand this correct, I should go with either 26650 or 21700 batteries to get the longest battery time / vape time.

Also, when I enter resistance and wattage in Steam Engine, the “run time” doesn’t change when the are changed, only when I increase the mAh.

Or did I get it all backwards?

All this depends on the device you are using, which is? I feel as tho we are being trolled but i will try to answer the obscure questions. In a regulated device connected in series it will buck the voltage down to give you extended mah as a parallel would but its not common that u can connect your batteries in any scheme that you want, off hand the noisy crickets v2/v3 are only ones. It is true that the 26650 and 21700 are designed more for life then amperage but taxing the batteries close to there max amp will hurt the life too. Gl to you but again I hope you didnt waste mine or anyone elses time here.

only the voltage increases, mAh stays the same

I’m no expert, but the way I understand it:
Since your voltage increases, you’re having to push fewer amps … so it’s the same as adding the mAh’s together.
I’m talking here about regulated mods… i don’t know about mechs.

Just read this, it should light your lamp.

After reading all this, I looked at my batteries and it got me thinking. Maybe I should update too lol.

Last time I bought a bunch of batteries (48 to be precise) was around 2? Years ago or something like that.

I use the hohm base charger from hohm tech and once every 3 month I run it through the battery doctor etc.

Don’t have an issue with them not charging correctly etc. and they last me a full day, sometimes longer depending on device.

Only problem some have a tiny nick in the wrap on the top, nothing major so, and yes I should rewrap lol

But anyways, maybe some newer “better” batteries might be in order. Might look at the LG’s, my current ones are samsung.

Thanks everyone for taking the time to recommend batteries. Much appreciated.

I have the green Samsung 25 R. I never have problems with those. I have been vaping for 4 years and I still have the first set of 10 I got from Amazon. I get a full day at medium vape level of usage.

you would have to know more info about your which battery size, device, watts,etc before recommending
https://www.e-cigarette-forum.com/blogs/mooch.256958/

General tips (to no one in particular)

The best thing you can do (once you’ve determined your preferred vaping style) with respect to batteries and battery life is:

For instance, I use a very unique method of building/wrapping my 0.17-0.19ohm coils (SS), but typically only run between 32-40w. They get up to temp ultra fast, but still usually only consume around 15 amps.
The reason I mention this is because I used LG HG2’s (browns) and Samsung 25r5’s during the first two years.
The LG’s were great in less-efficient mods (typically because of the inefficiency, and the LG’s had power to spare/or “waste” without affecting the vape). While the 25r5’s performed better in higher efficiency mods. Durations of use were similar, though with a slight edge to the LG’s during the first 6-8 months. Later in their life span, the Samsungs gained the edge.

However, when I changed to using the Samsung 30q’s, the tracked lifespan (in length of time between charges) dramatically increased over the 25r5’s for me and because of my load, draw style, etc.

So, bottom line, one should really tailor the battery to the application. After all, that’s why they are rated the way they are, and have the associated lifespan (in mah). It’s meant to be “as an example of lifespan, in a similar application”. And that’s something that many either don’t understand, often forget about, or simply aren’t aware of!

Hope this helps someone (anyone) to get a better understanding of why there’s so many options out there! 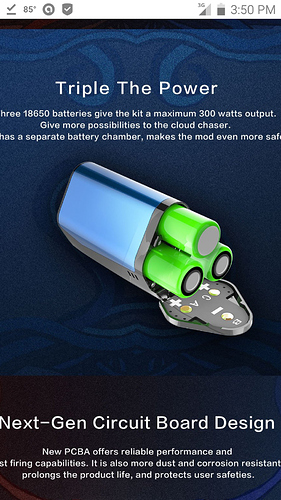 it goes to 300w so most likely in series.

It looks like a series-parallel mod to me (judging by the picture). In which case, given the current is divided between the two paths, the weakest link should always be your strongest consideration.

Given that batteries are recommended to be married (used as a matched set when there’s more than one in use in the same device), I would recommend using nothing less than a set of 25a batteries. And honestly, I’d suggest 30a batteries since it’s purportedly supposed to deliver 300w.

Whether it actually delivers that or not is immaterial to me personally. I always try to bare in mind the ‘what if’ moments… Because I’ve seen them (personally) happen. For instance, you’re carrying the mod, and it wasn’t locked or turned off, and the + button gets pushed without your realizing, and you go to fire it thinking “it’s still set where I left it” only to find its set to max temp (or God forbid, worse: max power) and you’re unexpectedly putting full juice through the device (and coil, etc).

In my opinion, Even if you don’t use it at levels near the max one should still be mindful of what CAN happen, and minimize the chances of things going wrong. Which also means maximizing chances for safety. To me, there is no separating the two in an example such as this.

Now, with that said, I do run Samsung 30Q’s in my Smoant Cylons.

However, while they are a “218w” device, I never run them in power mode unless I’m putting a new coil on and getting rid of hotspots (in which case, I’m only using 12w, which then gets set back into TC mode the instant I’m done.) I also never exceed the power available from those batteries (or even a single one) which as you pointed out (rightfully so) the coil plays an important role.

It would take a HUGELY unlikely chain of events (right combination of button presses) to change the power while in TC mode. And even though it’s not impossible, I still have to accept the risk of my choice.

How you use a device, and the overall design of the device (down to the way the options that selections are made, and settings are applied) should always be considered.