I’m on a quest. Let me preface that by saying the Dovpo Topside squonk mods are far and away the best I’ve tried - which to be honest is somewhat limited. However, this isn’t about a mod per se…well sort of.

The original Topside is a single battery (21700) and if you want decent vape time on a single charge you really need a single coil build. I know @JMak642 and I have been searching for some time for a great single coil RSA, but so far the ones I’ve had that are made for singles are not hitting the mark completely. I do enjoy the Recurve, but airflow is an issue. I like the Profile some, but flavor is not quite there. Like most people I’m sure, these two would suffice unless something better is out there. And I have a hunch there is. Did see a video or two about the Skyfall, but not spending $200+ on one. Call me cheap.

At present I’m vaping a bonza on the single battery, with a single coil build. It’s very decent but still would love a great RSA made for singles. What you got to share?

If you’re prepared to buy a clone, there is a very good version of the Skyfall available.
I actually buy quite a bit of genuine high end gear, but apart from the very high price, it’s not easy to find a Skyfall for sale, so I tried the clone and it’s perfect.

I ordered this one, should be stateside this week.

If airflow is your issue on the Recurve I don’t think I can be much help…but. The Recurve IMO sucks on flavor. The draw on the Ammit MTL RDA is decent for a DL hit with all 5 holes open and the flavor is awesome. I would say it is a touch more restrictive than the Recurve but it kills it on flavor.

The Drop Solo has good airflow, flavor is mediocre but better than the Recurve.

These are just my opinions, I know some that have good luck with the Recurve.

Asmodus bunker has great flavour.
Also blank seems to be a newer version of it although not had the blank myself

I have a few Aladdins and I like them. Close off the top airflow.

I was looking at that. Seems to have good reviews but with your recommendation I’m buying one. Got from Fasttech for just over $20

While I was there I thought I’d check out the Topside dual. I dropped mine recently and it damaged the little notches that keep the batter door securely closed. Fasttech has the dual for $90. Checked Element Vape and they have it $13 cheaper. Tariffs? I don’t know, but I’ll take the faster shipping and lower cost all day long!

Thanks for the tip. And everyone else as well. I’ll be sure to report my impressions once this clone arrives.

When it comes to single coil rsa’s I use my entheon from psyclone mods. Flavor is on point and better with a small fused Clapton.

The original Topside is a single battery (21700) and if you want decent vape time on a single charge you really need a single coil build.

The Hermetic does what I was looking for. And it was a steal of a deal here:

Blitz X Suck My Mod Hermetic 24MM BF RDA is the coil makers dream with the build deck being able to fit massive coils of any kind it'll vastly increase the style of coils you love. The build deck utilizes a single ceramic clamp for easy coil...

So much so that I have one on the original Topside and the Pulse Dual, and one for spare.

Blows the hell out of the Profile, the Recurve, and the Asmodus C4 LP.

While I think the hermetic is a good rda I do prefer the recurve.

Glad it worked for you!

The Recurve just didn’t fit the bill for me on a couple of fronts. The biggest problem was the airflow was just a bit too restricted. The other was that when using a complex mix on it, there were certain components that were either muted or missing altogether.

I wish I could love the Recurve. I bought 2

Hope i don’t derail the conversation, but generally curious about the difference between single and dual. Only ever used dual but was thinking of getting a single battery squonk and single coil rda for travelling. 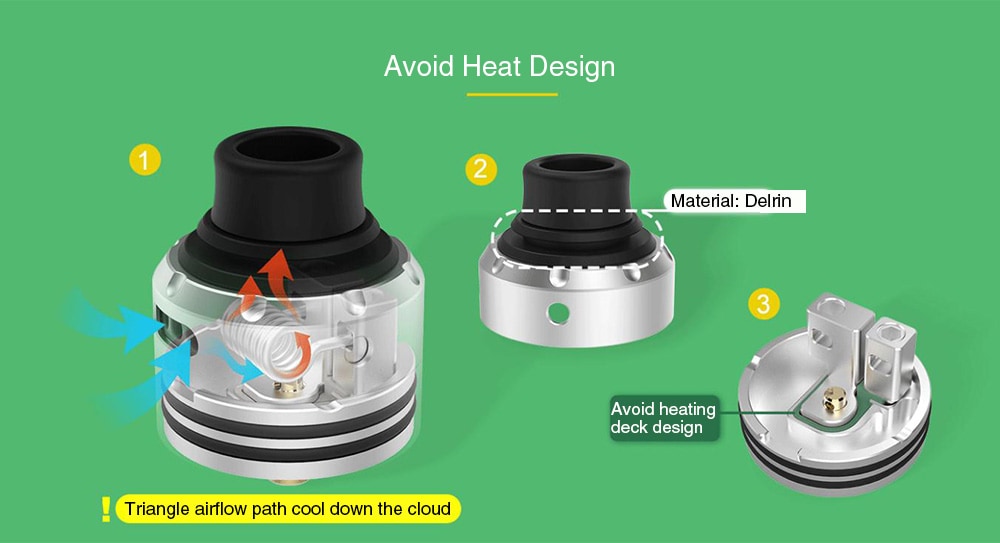 Lol, just the opposite for me with flavor for me. Hermetic gets used for dripping and recurve for squonking.

For me it’s as simple as I need more af than I prefer with a dual build.

I’m a bronie vaping on my pixie

I’m going to give this one a try, the airflow looks to be my speed. Bit worried about 510 driptip, been on 810 so long.