Having decided that I like the Nautilus 2 tank my Aspire Zelos mod came with, I got another for my CBD juice. The original tank was still going strong at about a month’s use, so I was really surprised to get that telltale burnt taste after less than a week.

I shrugged and assumed that it was because I’d used it more heavily than usual, though I can only have used about 3ml of juice when I looked at how much was left in the bottle later. That’s when I saw that it’s a 50/50 mix and thought I should change from a sub coil.

So, basically, I have the correct coil for my juice and have been trying to run it at the recommended wattage. So why do I need to change the coil again after only 5 days when I haven’t changed the coil in the other once in a month and a half? It’s not the juice, I’ve used it in all my tanks and have thus far only had to change one coil after over a month heavy (for me) use

I don’t have that tank, but based on the tanks I use, I find that the coil that comes pre-installed is super quality and lasts a good while, but the replacement coils that you buy are very hit and miss…generally I can get 10 days out of one, but sometimes it’s 2-3 days. IMHO quality control goes out the window for the production of replacement coils.

replacement coils that you buy are very hit and miss…generally I can get 10 days out of one, but sometimes it’s 2-3 days. IMHO quality control goes out the window for the production of replacement coils.

Completely agree.
My primary reason for switching to atomizers that allow for building your own coils (and using your own cotton) was to escape the maddening frustration of inconsistent coils.

I don’t care who the manufacturer is, I’ve read problems about so many that I decided very early in that I wasn’t putting up with that.

It might have been totally different if there was consistency in even one or two brands. But it certainly didn’t seem that way the more I read.

@Ken_O_Where care to comment on if CBC shortens the life of the coil? This is what I suspect as a contributing factor but since I don is cbd I can’t expertly say.

Me and my wife both run a nautilus 2 tank with 1.6ohm coils and they last a fair amount of time with 60vg/40pg fruit e-liquid.

I’m with @Chrispdx and also suspect the CBD is heavier on the coil.

Assumed that it’s not the cbd, as I’ve used the same juice with other tanks no problem. I even used it in my other Nautlius2 tank without the same problem, though admittedly not as extensively. This particular juice does seem to flow through less easily than others, and it’s the only time I’ve deviated from a 70/30 mix. Could the extra pg be causing issues?

Is rebuilding hard? I looked into it as far as seeing that pliers are involved. I used to use scissors instead of pliers for jewellery-making because I completely failed in their use

Rebuilding can be difficult if you have arthritis or really bad eye sight… otherwise, give it a go because it’s easy.
You don’t need to spend a fortune on tools and everything from the start, just begin with a single coil RTA, some cheap japanese cotton and get a few different premade coils that you just need to place and wick.
If you think that building is something you don’t mind to do, then you can always invest a little extra.

I recommend scanning this forum for a single coil RTA with a good reputation and checking out some building and wicking examples on youtube.

Is rebuilding hard? I looked into it as far as seeing that pliers are involved.

Rebuilding can be difficult if you have arthritis or really bad eye sight… otherwise, give it a go because it’s easy.

I’d have to agree with Suomynona… The only reason I can see for pliers in basic coil building, is a lack of dexterity, or “normal” finger strength.

There’s no need for the overpriced tool kits, as long as you have a fair assortment of basic screwdrivers. The one thing most folks might have to buy is a good set of flush cutters.

I use these (because I’ve used them in my electronics work for decades now): 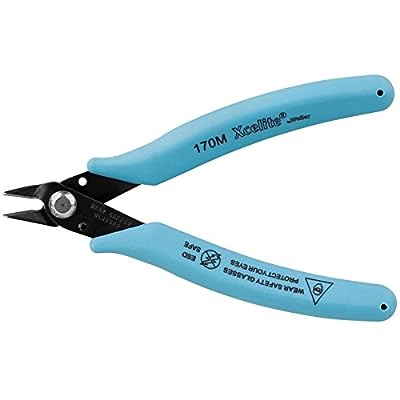 You can find cheaper, but by the time you’ve gone through 3 or 4 pair of the cheapo’s, you’ll wish you would have bought these to start with. (The blades don’t dull as easily, and they don’t get misaligned nearly as easily as the cheaper ones.) Should you decide to get into more intricate builds (thicker Guage or more strands in the core), then you might want a set that’s more heavy duty.

Wrapping your own coils is super easy though, and even if you don’t want to build/wrap your own, you can still get far more consistent results by buying pre-made coils (not to be confused with pre-made cartridges), and using your own cotton!

NOTE
It’s important to remember that when they say “Flush cuts soft wire up to 20 AWG” they mean nothing bigger than that (translation 18ga, 16ga, 14ga, etc). Remember, the higher the numbers, the smaller (more fine) the wire gets!

You need one of these if you are going to build your own coils, it helps immensely when it comes to time and mucking about with a screwdriver. https://www.coil-master.net/product/coil-master-coiling-kit-v4 for example.

I have done the screwdriver thing, but this winds the coils tighter and its worth the 20 bucks or where ever you find one at a price your willing to pay shopping around.

It’s what I do now for my RDA’s. I used to make my own coils, but … arthritis. yeah.

+1 for coil building and RTA’s . It’s easy, cheap and the improvement in flavor is huge, was for me anyway.

@anon45050679 how do you find the flavor on the nautilus 2?. I began vaping with the original nautilus and when I purchased my first RTA I realised how crap the nautilus was. All of a sudden I could taste the flavors in my juice! I never looked back and I haven’t installed a factory coil since my first RTA purchase.

Thanks. So I guess I can’t blame the pg. It seems to only really be causing a problem in this one tank, but that may be because of more extensive use here

I have a number of issues with grip, sight, and ability to hold stuff reliably. I get good days where I can do fiddly things, bug they can’t be replied on

I have a number of issues with grip, sight, and ability to hold stuff reliably.

There’s a few great (and friendly) folks you might talk to further about such things… @Alisa (who posted above) obviously is one of them, @GPC2012 is another that I can think of offhand.

I wish you success in whichever direction that you determine you need to proceed with! =)

Rebuilding is wonderful, of course that’s if you don’t have beat up old arthritic hands like mine. I just can’t do it without a ton a pain during and moreso after for at least two days.

Wish I could on the occasion that my son or one of my vape buddies has done a coil for me for one of my RDA’s I love it, the flavor is good and pure my only problem when trying to serve two masters is that I forget I’m using an RDA and all of a sudden it’s dry and hot and nasty. Tanks last so much longer.

IMHO the three best tank brands for no leaking and coil life are (in no order) Eleaf, Vaporesso, and Joytech**

**the Ultimo has an issue with collecting juice in the bottom and dripping it our when I forget and it ends up on it’s side for a few minutes but that’s a matter of cleaning it more often. So it’s kinda my fault there for bein lazy

Thanks. It’s certainly something to think on. I’m aware that I’m fairly new to this, so maybe not for a while

So, I’ve been thinking that the taste from problems with separation and a couple of other hitches produce the same burnt taste as needing to change a coil. I don’t know whether there’s any visible difference when the BBC coils get burnt, and I thought that a different coil had gone until I saw cloudy patches in the tank. I noticed it before with this juice, though can’t remember if there was burnt taste then.

I can’t seem to find a pic of what a burnt BBC looks like to tell whether there’s a noticeable difference. Anyone got one? The only other coil that I’ve taken out was a fixed CE4, and it was noticeably a little different even through the tank. So my hope is that I’ve been experiencing technical errors with my juice at times, which inexperience has lead me to believe was coil burn