Hey everyone, I just want to check in and see where everyone is buying their flavors concentrates from. I had a stock I have been using for a while and when going to my previously used spot I noticed they now are only selling in gallons and drums, which I don’t think I need that much. Any thoughts on where everyone is buying flavors from now would be great.

BCF? Sorry I have never been to them before but I will for sure check them out. Do you have a link or what does BCF stand for

I guess I don’t know this. What do you mean?

Yeah I wonder how BCF managed to pull that one off. Wasn’t there some sort of restriction with FA North America offering flavors with diketones… such as the Kitchen Line?

They are “not to be used for vaping” disclaimer says so, IFYAKNOWWHATI’MSAYIN

The flavors were never banned …FANA decided to pull them bc of diketones for no reason except to cover their ass. I think with all the flavor bans etc they said fuck it but @woftam had a great explanation bot to long ago , maybe he will chime in.

FANA decided to not stock any flavour that did not pass FlavourArt’s ClearStream testing to the point of refusing to supply any supplier in Nth America that bypassed them and bought & sold what Flavour Art now call their kitchen line directly from FA.

Now with many of the Vape Flavour suppliers diversifying into general flavour suppliers, I think some are finding their way through to Nth America. Ultimately I think it was a business decision based on liability down the road.

Personally, DAAP is of very little concern to me since the relative risk of vaping DAAP to smoking is very very small (Analogues containing up to 750x more DAAP than the DAAPiest juice). 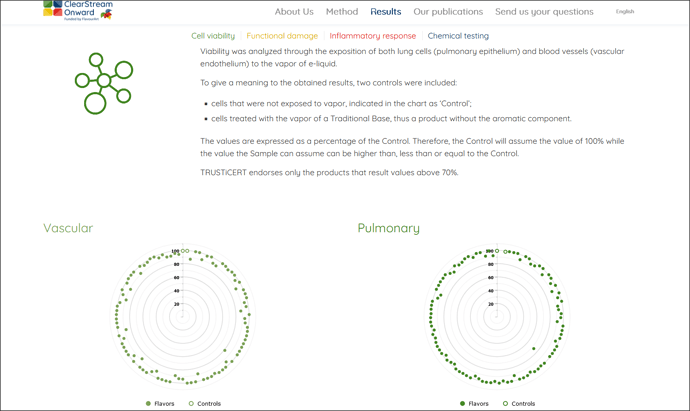 Yet none still show on ClearStream so we can see for ourselves AND as I predicted in their new 20+ flavor thread which still doesn’t show any.

IIRC it was done around the same time as their Minimum/Manufacturer Pricing mandate (to help the smaller rebottlers)
Remember they supplied WW with his own Custard Premium in Canada?

IMHO they were trying to convince the gooberment they were tested and safe, hoping to increase sales that way. But others like I thought if I’m gonna buy offshore and have to pay very reasonable shipping, why would I only buy banned flavors? Nope, buy 'em all from Chef’s. I’d imagine chef’s get their supplies from FAUK or Italy. So FANA and American sellers lose out on missed sales.
It got really hilarious when the simpleton head of FANA threatened legal action over this recipe name. 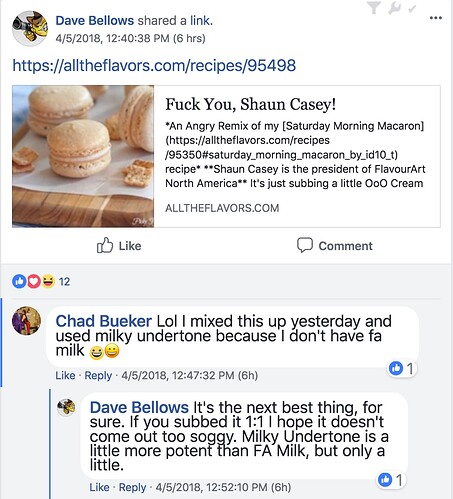 Sometimes ya gotta make up a word just to make it work. Nicely done my friend!!

But others like I thought if I’m gonna buy offshore and have to pay very reasonable shipping, why would I only buy banned flavors? Nope, buy 'em all from Chefs. I’d imagine chefs get their supplies from FAUK or Italy. So FANA and American sellers lose out on missed sales.

It got really hilarious when the simpleton head of FANA threatened legal action over this recipe name.

haha, That is hilarious!! I think I’ll import that recipe lol

@big_vape how can I get that recipe? I don’t think it’s on the site anymore.

This is the one it’s based on:

They’re talking about subbing milky undertone for FA milk, which I don’t have yet. It looks good so I’m going to mix it up with that substitution right now.

Edit: my bad, the original is on atf without the sub (1% FA Milk) this is the sub version that I just mixed.

Yeah, me thinks it’s a goner, brother Dan. But his other Macaron recipes are pretty bang on.