Got a new tank I thought I might share with you, as it’s chucking out the flavour with precision and ease of use I haven’t seen so far. The tank we’re talking about is CeraVape’s Cerabis, a 4.5 ml tank with prebuilt ceramic coils and a lot of pretty original features.

If you prefer a professional review, here’s a good one: 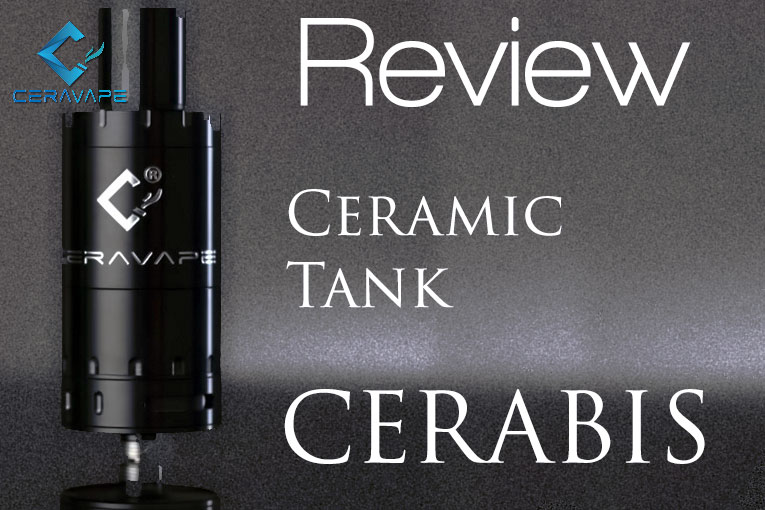 So who’s CeraVape? I assume you haven’t heard about them, not until recently. They have been keeping a low profile, only one (badly maintained) website in the UK. However, they’re the pioneers of ceramic prebuilts - although ceramic coils have been making quite a splash this year, CeraVape has been R&D’ing them since three years ago. No wonder they’re holding a few patents in that market. Their earlier products weren’t too well received though - but this time, with their new tank the Cerabis, they should be on their way to being well-known.

What kept me from using any prebuilts, was that prebuilt coil heads are expensive (and I’m cheap), have significant ghosting (to my taste buds anyways) and couldn’t keep up in terms of performance with the coils I make myself - and I’m far from being skilled! Noticed the past tense? Yep, the Cerabis has solved these issues for me, so now I can enjoy my vape even when I’m too busy to dry burn, rewick and do all the other voodoo stuff necessary. Whenever I change flavours (or every third tank or so), I clean the tank under running water, dry burn the coil at 30W 3 seconds each for four times, refill, wait for a minute or two and the flavour and vapour production is just as new! Takes about five minutes tops and I’m off the go again. Doesn’t get more convenient than that.
As there’s no cotton that needs to be changed (and no ghosting, woohoo!) the next limit to the coil head’s service time is the Kanthal inside. I wish they would have put the Kanthal inside the ceramic wick, then we could use one coil head until God-knows-when, but this is ok, too. I suppose one coil head should last around three months of daily use, maybe a little less. We’ll see. They got 0.9 and 0.5 ohms versions of them and they aren’t even that expensive.

The other cool feature is the liquid control. The Cerabis is a telescopic tank, so you pull the tank out so that liquid can reach the coil head, and collapse the tank to prevent liquid from reaching any outlets, all the while protecting the pyrex glass tank inside. Work pretty neatly, never had a drop of spillage and it looks like it could take a beating.

Normal operating wattages are 30-80W, and you’ll really need at least 40W to get the ceramic coil head going. The airflow allows for rather tight MTL hits or - the main purpose it seems to me - lung hits. This is def. a flavour tank, complex juice shines, comparable to mesh builds. I tested this with some heavy creams and tobaccos I have and compared it to my Origen 2 and it was almost the same (different build, I have a dual coil build in my Origen 2).

OK, so the only downsides I can see so far, are heat dissipation and my laziness. This tank will make me lazy, I could rebuild and rewick and all, or I could just wip out my Cerabis and go… Now about the heat. The tank has a rather restricted draw even with everything wide open, compared to other sub-tanks and drippers on the market right now. And it gets pretty hot, more quickly than I expected! I vape around 45W in my Aromamizer, too, and it doesn’t get hot at all - warm is all I get. But in the Cerabis, after the 8th hit it starts to run hot.
Not a big problem, but worth mentioning. Good thing the drip tip (standard 510) is well isolated and does a fairly good job at preventing lip burn.

So that’s about it, hope you enjoyed the read! I think it’s well worth the 40$ and it’s a formidable work horse for when you’re too busy being delicious.

I discovered this product yesterday, but haven’t found a vendor. Can you recommend one? How are the prices for replacement coil heads?

Can’t recommend any vendor, mate. I got it directly from CeraVape, as I’m in China. Normally I wouldn’t have been able to get one, haha.

OK, thanks. The search continues…