Yes… It’s quite something, that experience. Glad you are ok though. Some didn’t make it.

I’ve heard it said that a tornado sounds like a freight train approaching. Is that true?

@TorturedZen, I’ve lived in tornado alley most of my grown life. It sounds much like a freight train, at full speed, making rapturous, though noisy, love to the biggest rain storm you can imagine. . .

Best description I can come up with, ATM.

Scary AF, though. Luckily, never been hit by one but it’s been a near thing, several times. The last big one that hit Moore, OK …?

I was working at Tinker AFB and a little one touched down in a field (at about the same time) near my building. It was not fun.

Thanks for the kind words and thoughts. Since the tornado came thru the power has been out in Hermitage. It took out the main power grid for Hermitage and Mt. Juliet TN. They say power should be restored in 3 or 4 days.

I tried to reply last night, but I had my phone in power saving mode which shutdown data usage… (figured that out this morning).

There is a lot of damage to this area. It’s really a mess right now, but I’m hopeful things will start to normalize soon.

Glad you and yours are ok mate - I hope to never experience a tornado, I cannot even imagine.

@Pro_Vapes seeing as though the power’s out and all that THAT involves, do you need anything ??

https://www.wsmv.com/news/putnam-county-releases-list-of-people-considered-missing-after-tornado/article_72056c40-5dc4-11ea-b71c-e762ea0416ba.html praying we aren’t going to see another 2011

Luckily I recently mixed are large batch of my adv and I have 2 mods in rotation and a power bank to keep them charged up at work. So I should be okay… I really appreciate the offer @SessionDrummer.

I’ve heard it said that a tornado sounds like a freight train approaching. Is that true?

I’ve heard the same myself. From a distance it sounded like a jet engine, but when its bearing down it does sound like speeding train times 3… scary stuff my friend.

So I should be okay…

Where I live in NE Italy, there’s a gale wind called Bora, it’s not like as scary as an F3 tornado but the windspeed is from an F1 to an F2, every single winter, it can lift a car and push it in the sea, trees get uprooted and things like that… every single winter… on the sidewalk there are chains that you can hold on to… it’s funny when people get used to things like that and hear them say… well last night wasn’t that bad we only had 100mph gusts. but it can peak at 130mph in no time…
I had a big marble tabletop in my garden once, it got lifted and got thrown away… believe me it was four of us that put it there… I never glued it down thinking no chance the bora is going to lift that… wishful thinking…

A tornado comes and goes, the bora stays there… all day and all night… for 3 to 5 days you sleep (maybe) with that jet engine sound and worry… is there something I forgot outside?
Fortunately it builds up and you already know what you have to do, you get used to it.

@Pro_Vapes I’m glad you’re ok! I (almost) know what it feels like!!

Thanks for the heads up!

My electricity was restored today and I’m soooo happy!

Today the streets were opened where the tornado hit. After talking with a coworker that’s also from this area we were able to determine that I was in the path of the tornado or at least a very close proximity.

This first photo is near where the tornado either lifted or ended ripping through this shopping center. Far right is the Outback Steakhouse, Panera Bread and the Pet Smart which was destroyed. The community behind this Shopping Center was also hit pretty hard. I live about 3/4 mile behind that community in the direction the tornado was traveling. 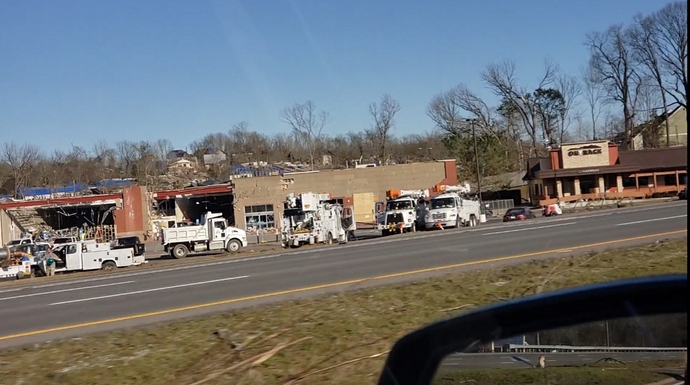 It’s my belief that it was rising when it passed over just feet above the ground. Here’s another photo taken from my driveway about 75 ft away. The top of this tree on the left side of the photo was shredded and dumped on top the neighbors house and yard. 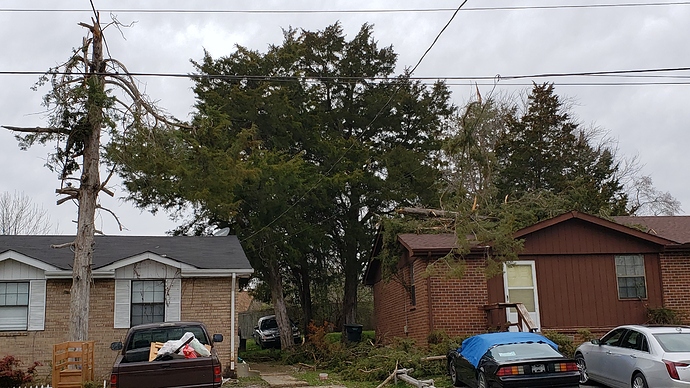 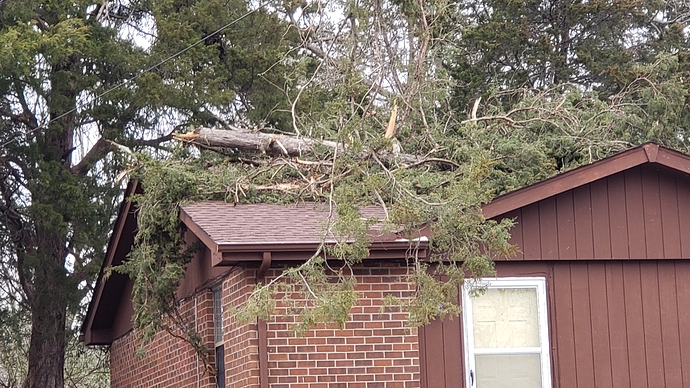 It hit ground again about 2-3 miles behind me on Central Pike, Hermitage Tn on in to Mt. Juliet TN which also took a lot of damage.

EDIT: Now that I have power I’ll charge the batteries for my drone and see if I can trace the path back to that shopping center.

Glad you were missed! Tornadoes are no joke, man!