Once in a while if I want to try a SnV right away I’ll plop the bottle of juice in hot water from the tap for about five minutes or less just to make sure it’s thin enough to shake up really well. I’ve noticed that when I do this a lot of times the juice gets a bit cloudy and it never completely goes away. And I know it’s not the specific flavors I’m using because I can make up the exact same recipe but without any heat and it’ll be crystal clear. Anyone else have this happen? What’s going on here? I don’t want to be changing or damaging my liquid, but I know lots of people here use heat and seem to prefer mixing that way.

Here’s the same recipe, the first was mixed without heat and the second with. These were mixed about a week ago. (Sorry for the crappy pics, hopefully you can see the difference I’m talking about). 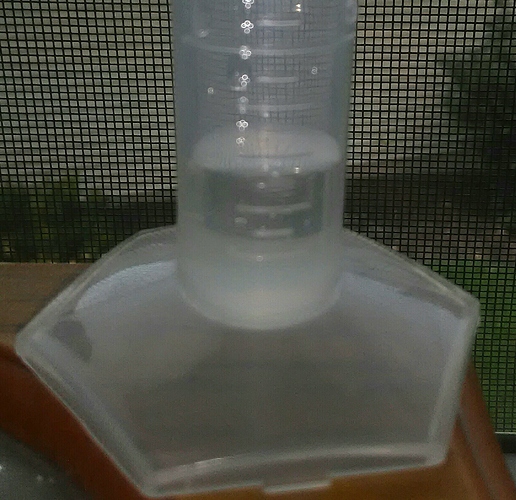 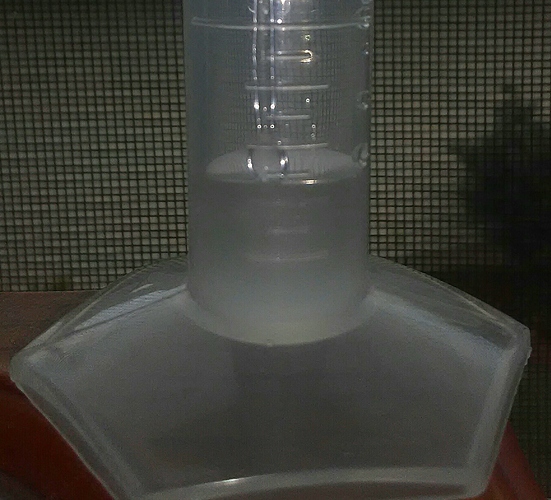 Are you heating these in plastic ? I have plenty of times used my plastic bottles LPDE and HPDE w/ no issues…I don’t have this issue wonder what it is that’s happening.

I use glass mostly.

The only thing I’d say is check to see what type of plastic your beaker is and also what your temperature is ?

I’d have to say there is some sort of chemical composition changing going on for this reaction to occur…weird and it never goes away huh ?

It’s happened in both plastic and glass. This one was mixed and heated in a glass bottle. The only thing I use my beaker for is measuring vg, I just put the samples for the picture in it because the juice is in an amber bottle and it’s difficult to see.

And yeah, it never goes away.

Tecnically that would be UNLIKE

Wish I knew more about the effects of what’s happening. I know I have a floating thermometer and check my lil dipper crock pot often to make sure it stays below 120 F I hardly doubt your warm tap water is that high but you could check your water heater settings just to be sure. That’s mainly for the Nicotine’s sake as flavors that we use often get used in baking and that’s a lot higher degrees than what were talking here.

Mikes melons goes very cloudy and stays cloudy after shaking, it’s the only one that does it.

As for heat… Personally I would not apply any heat to my e liquids, I feel that none of the ingredients would benefit from it.

ecto cooler is another one that stays cloudy, I’ve had some lemonade recipes do it too, I warm most of mine up in a slow cooker prior to the long steep I just find it thins it out which helps with the mixing, but apart from the ones I mentioned I don’t normally have a problem with it. do you think that’s a bad idea then?..I’ve heard of so many people doing it I just thought it was normal?..

I’ve never done it, I know some people swear on it.

This is my preferred method:

Vigorously shake your mix for at least a minute upside down and right side up, it will mix just fine, steep it in a dark place at room temperature, it will settle and slightly separate, remove and shake again every 1-2 days.

Doing it this way, my liquids darken quick and the flavours come together nicely.

I should try other methods just so I can see the difference, maybe I’ll do some 10ml batches.

She said if she makes the exact same batch and doesn’t heat it up it will not turn cloudy.

I know there are several flavors that cloud regardless of heat used or not.

@VapeyMama Have you tried shaking it up before you heat it?

I get that sometimes. It vapes ok. It happens more with menthol stuff though…and it is heat that seems to do it.

Most of my mixes today are a bit cloudy, but I’m not too worried since I know tomorrow it will go away. Most of the cloudy aspect are the micro bubbles. The other part I believe is the chemical process of blending it starting.

I’ve noticed that when I do this a lot of times the juice gets a bit cloudy and it never completely goes away.

Do you have pineapple in the mix? I have noticed that every time I use pineapple it is cloudy AND leaves a cloudiness on my bottles. Pineapple is some bad sh@t. Noticed this with a couple of others but don’t remember which ones…

Oh yes, as @Maureeenie said, Menthol was another…

I just lightly shake it before heating, then afterwards I shake it up better.

Nope, no pineapple. And no menthol.

Nope, no pineapple. And no menthol.

Regardless, I say don’t worry about it as long as the juice is good. Some flavors make clouds before you get to make clouds. Fact of life…

I know it’s not the specific flavors I’m using because I can make up the exact same recipe but without any heat and it’ll be crystal clear.

Mine get pretty hot in the USC, easily as hot as hot tap water, and never look this cloudy.

What if you mix up some unflavored and do this same process?

Or just do this process to a sample of your pg and/or vg?

That’s a good idea. I just mix max vg with pg nic, so I think I’ll test it out with just those. I’ve been using vg and 48mg nicselect nicotine both from from nicotine river.

First of all, if you use ANY heat, you must use a thermometer. Even magnetic stirring without a hot plate will create enough heat from friction to ruin your nicotine, which should never exceed 118F. An infrared thermometer works best, and I never let my batches exceed 110F while stirring, and usually slow the rpm’s at 105F-107F

As far as tap water, it can easily be above 118F in many homes. Factory water heater settings are between 120F and 140F

Yes, flavorings are used in foods like cakes, etc. and heated 4 times higher than normal e-juice, but when is the last time you said “my cookies look cloudy”.

I, too, (only) use NR VG, VG nic, and PG…and I use the same flavorings as you do. I never have those problems. I also only mix with mag stirrers, and never have made e-juice any other way, because it mixes more at a molecular level, the ingredients begin at room temperature and gradually increase in temperature WHILE MIXING. They blend better…and stay blended.

This is for objects…not set for taking temperatures of humans. 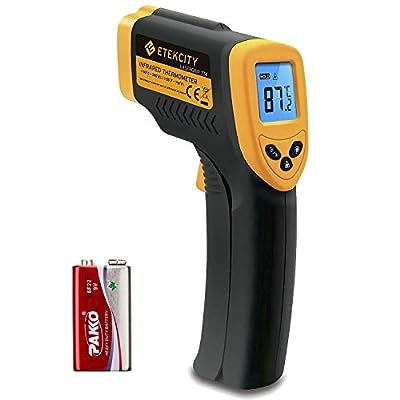 The Standard of Measurement Practical for both indoor and outdoor use, the Lasergrip 774 lets you safely measure surface temperatures from a distance while still maintaining laser-sharp accuracy. Meas ...

OK sweet cheeks I got one question for you. are you completely submerging the bottle in the hot water or just up to the cap? If the bottle is submerged in hot water and the water heats the liquid then cools down the atmospheric pressure is lowered and if the lid isn’t 100% water tight you may suck a tiny bit of water back into the bottle. Your safest bet is to bag ina ziplock bag then use a weight to hold the bottle down into the water. The only other possibility I can think of is- does the juice you’re mixing have any citurs in it. heating citrus may mke it a bit cloudy.