How long is the stick length you start off at? Are you looking for 1-2 finished coils a stick?

Most of the time I make enough for two coils so around 7 to eight inches long. With harder variations, I only make one coil. The one in my last picture started off as a two and a half foot (maybe less?) spaced clapton. I took that one long spaced Clapton and cut it into 7 pieces. Then I fuse them all together.

I haven’t posted in a while. Here’s some aliens I’ve been working on: 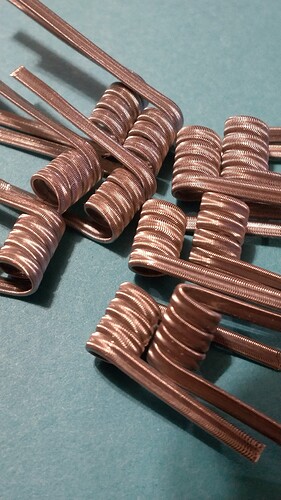 7 core Alien in a gold Dragon: 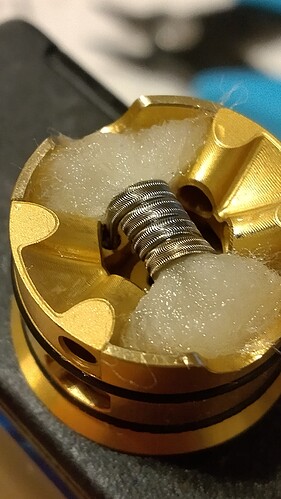 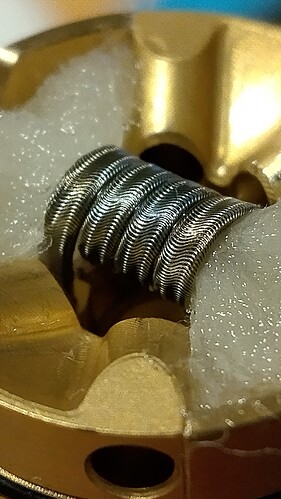 A while back I made a bunch of N80 SSFC coils: 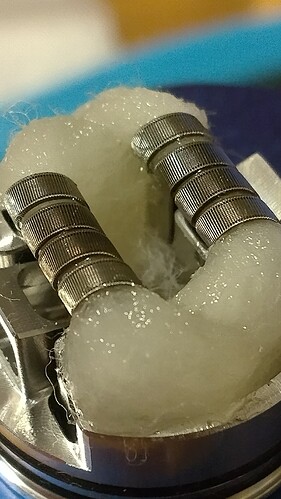 Dam nice work.I’d need binoculars to make them I struggle with 36 let alone Clapton it

Thanks! I mainly stagger coils these days but practice aliens every so often. I can make SFC coils with 42ga but I can’t really see what’s going on lol. Mistakes show up and I can spot those but for the most part I’m going by feel.

A while back I made some all ribbon SSFC coils. 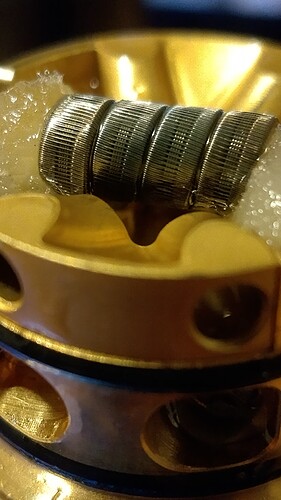 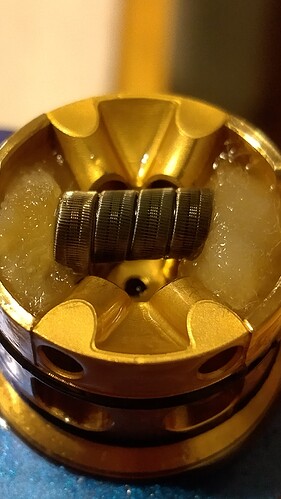 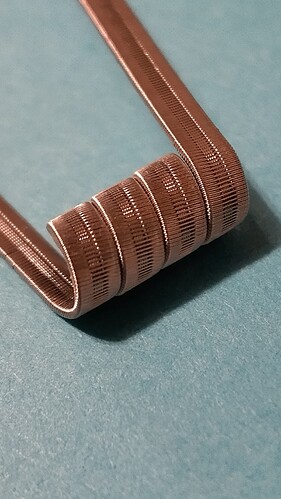 Another mesh-like SFC coil in a Wasp King RDA 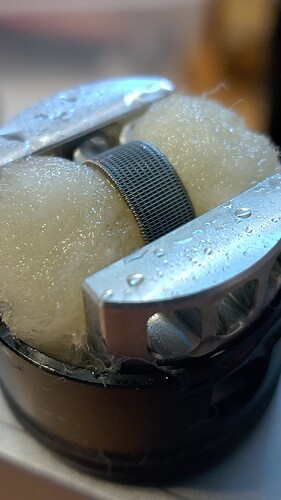 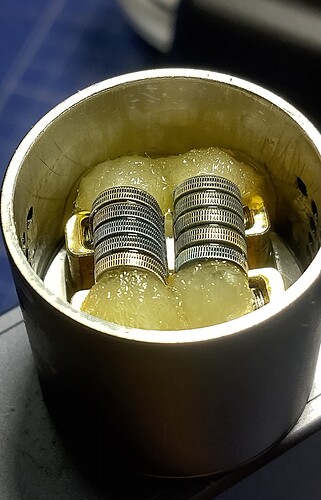 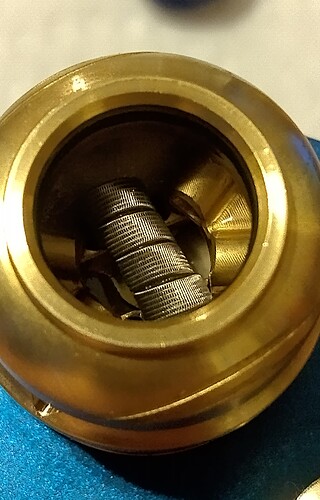 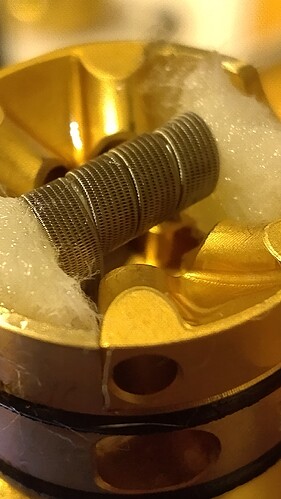 Some staggertons in a Bonza: 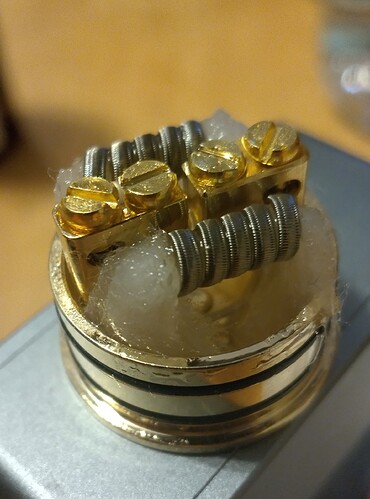 Groove fused variation in a Nightmare: 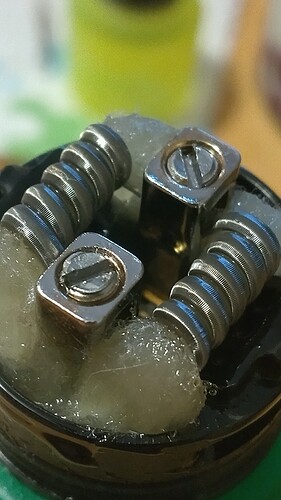 Lastly some series stags in a Valhalla V2 Mini: 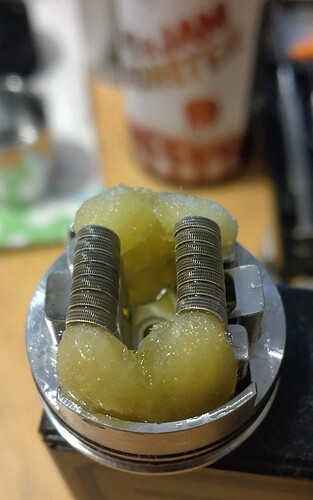 Some serious nice work there so if I’m right in saying in the dragon 7x spaced 31gauge then you stapled them altogether.Buying myself a new magnifying glass so I can see what I’m doing you must have the patience of a saint nice

I start by making one really long 31/42ga clapton wire. The clapton wrap is spaced though, not tightly wound. I cut it into seven pieces, positioning them side by side. Lastly, it’s fused together with a separate 42ga wire. The fusing wire falls into the spaces I initially created.

I took a photo a while ago that should give you an idea of how it goes. I spread the ends out just for visibility.

I’ve been trying to make atleast one set of these whenever I spin. Here’s a cool photo I took of coils and legs 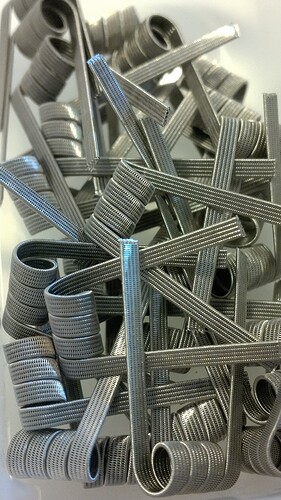 Those some sweet looking Legs you got there @INOIROC 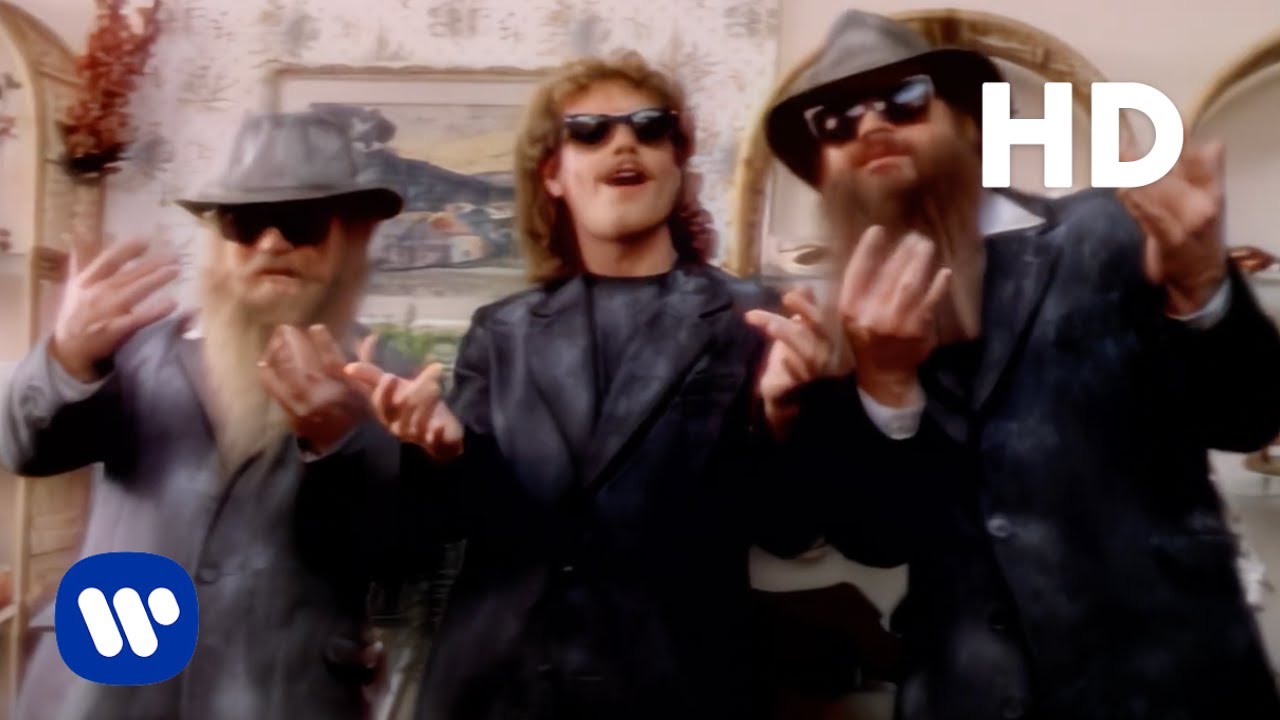 Crazy nice work. Best i ever came up with was twisted coils, i used a coffee mug.

I had a bit of free time today and didn’t know what to make. I went with something simple. I grabbed some thin N90 wire and twisted it up to make some funky coils

. You have to sing Chubby Checker in your head while viewing this coil

C’mon baby, let’s do the twist. 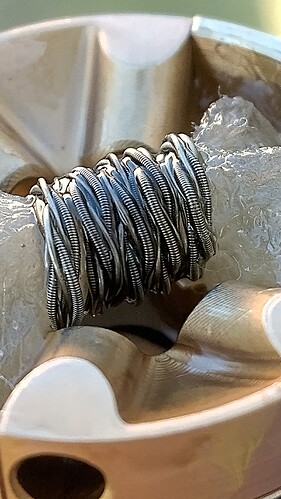 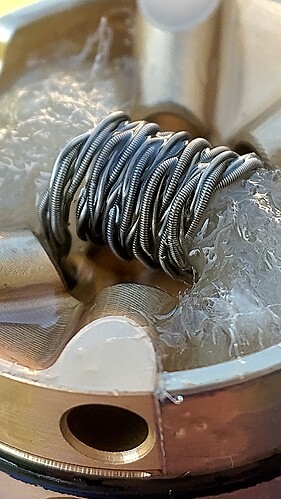 I started by twisting a regular round wire with a clapton wire. I spun those clockwise. I cut that stick into 3 pieces and spun those in the opposite direction. It ended up at .24Ω and works good at 55W. It vapes a lot better than I expected. Getting some nice tasty flavor from the gold dragon tonight

I tend to think of ramp-up time when I see coils like that. It wouldn’t be very practical if it took 5 sec to fire.

You mean those twisted coils I posted last? They fire up pretty quick at 55W. 32ga isn’t very big and N90 wire seems to ramp up faster than anything I’ve tried. People still use Amazon wire like fused claptons with 32ga clapton wraps. Those kind of coils always make me think of ramp up

I made some stainless staggered coils: 5x30/40ga. They read .09 so a bit low. The colors seemed to jump out of this one. 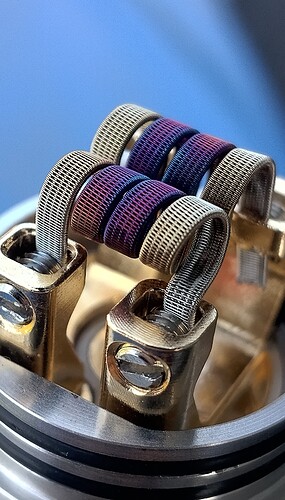 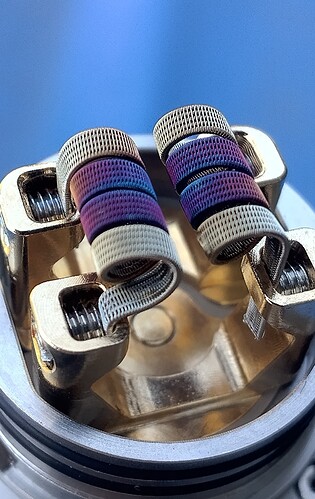 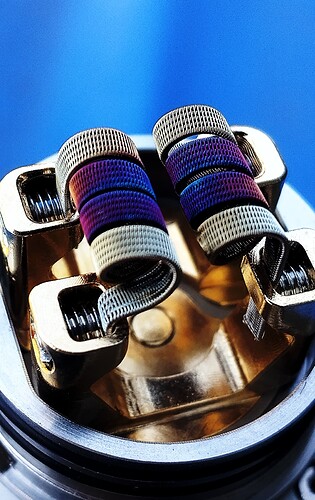 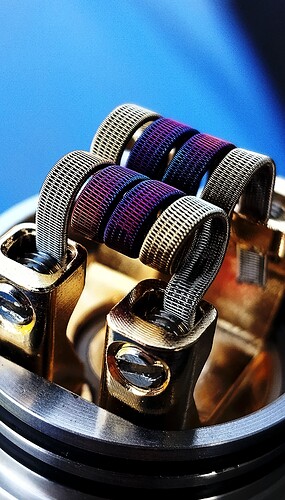 I’ve been practicing my corrugating skills lately too 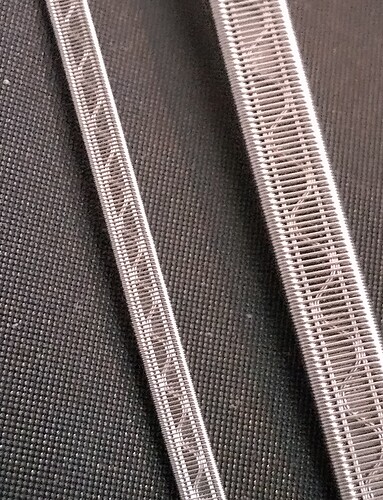 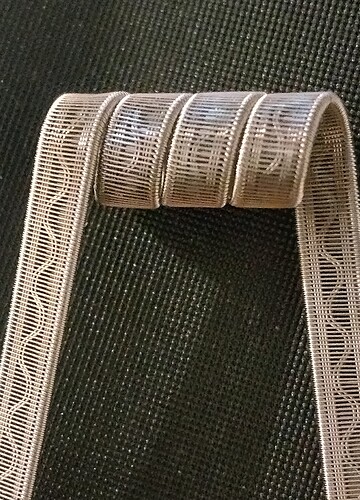 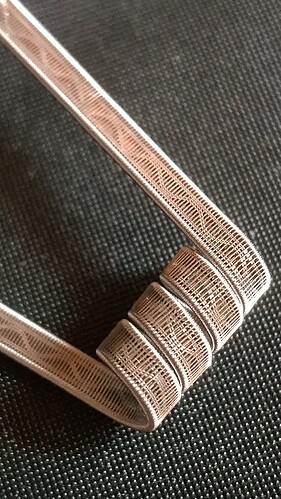 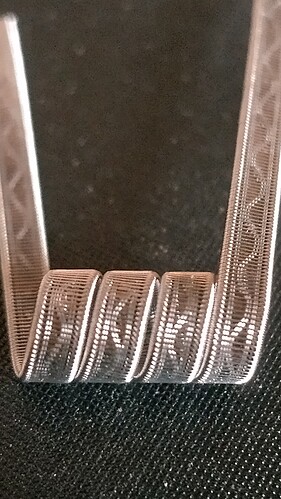 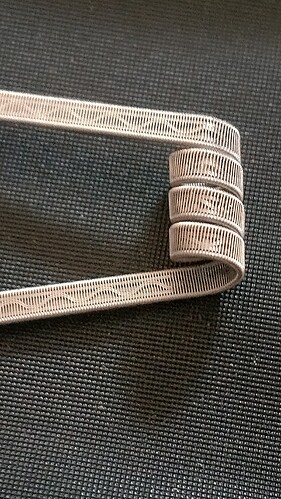 The larger one in the sticks photo was just for fun. It has 20ga frames and .8 ribbon /34ga

. Not sure if anybody would ever try use that big of a coil…

Beautiful! And here I am struggling to make simple staggered duals. 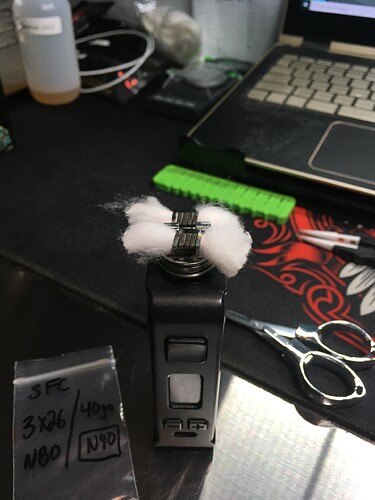 Luckily I’ve been blessed with good vision my whole life. Steady hands is probably another major asset. When I first started, I used a two-hole button. I’ve tried just about every spacing technique there is except for the weighted loop method. It’s never interested me because I avoid putting too much weight on my line. I like using spring clamps (Trick that Nick Dumas posted on YouTube), but mainly keep going back to my button.

Once you learn how to tighten it properly, stags can be a piece of cake. Another thing that I started doing is: For all SFC coils, only one of my cores gets hooked up to the swivel side. I’ve made them with up to 15 or 16 cores, and still only one goes to the swivel. They all get hot glue on the chuck end, but the rest fly freely. The spaces need to move, and most will eventually slide off the core on the end. I keep them grouped together with small pieces of straws. I usually only need one piece so that the wires don’t fly around wildly.

The thing about the button is: You need to get it tightened but without breaking the wire. You want it pretty secure, and one more half turn can potentially snap the wire. It takes practice is all… It also needs to be in the right place. I only use magnification when needed. Double checking my button is one of those times, and fixing mistakes is another. Otherwise, I just spin away looking with my eyes. Good lighting helps a lot. I use two lamps, with the room light on.

I’ve tried folding one piece in half, and it always gave me trouble. It might go good for a ways, but it’ll eventually start bunching up. I started with 36ga and it went pretty well. When I moved to 38ga, I had a lot of trouble. That’s when I found out how critical even spacing was… I started getting better with practice and eventually moved to 40ga, and lastly 42ga. That stuff is like a piece of hair but I figured out how to stagger it

. 44ga has proven to be impossible for me. I’ve only tried N80 but it’s just too thin. It doesn’t hold it’s form very well and the spacing is really hard to keep consistent. I might figure it out one day (just for the challenge), but 42 is thin enough. Some of my favorite coils have that size. I don’t think anybody else uses it often.

That’s probably a lot of info, but I have lots to share about staggering