Coils.. Do we really need to pulse them?

Has anyone tried just wicking the coil as is, painting it and vaping?

The reason I ask is, all the pre built coil heads I’ve used like the SSOCC’s and BVC’s look like fresh never before fired coils and they work perfectly fine.

If you don’t pulse coils you made yourself, the risk is that they suffer from hot spots and if you just wick them and start vaping on them it might just taste disgusting due to the hot spots.
I would say it is a necessary evil we have to do to get the best vape possible out of our coils.

Then the question remains? Do stock coils not get hot spots. If not why, is there a process perhaps they do to the wire.

I am more concerned about machine oil and things like that. Yes, pulse the coils to get rid of hot spots as well, but when you dry burn the coils you will also burn off other shit that might be on your wires which you dont want to vape.

Same reason I do it, to burn off any residue that may be on the wire.

Yeah better do so. I bet if some people would take a random regular wire and clean a bit with a napkin, they will be surprised how much there is on those wires. Regular wires could be cleaned using other methods, as with napkin before burning, but it is not that easy with more complex wires such as fused clapton. To be able to clean such wires i guess you will need to throw them in an ultrasonic cleaner or something like that, and even if that was done, better burn the coils to be on the safe side.

Like @Fenrir1 said, you need to get those hot spots worked out.

Then the question remains? Do stock coils not get hot spots. If not why, is there a process perhaps they do to the wire.

The thing with stock coils is that they’re machine made unlike our hand-made coils. So they’re more consistent in applied pressure and tension. Still, I remember how many “bad coils” I got back when I was buying pre-builts, so there are inconsistencies in machine-made coils, too. It’d be cool if anyone could acquire a bad coil, break it open, install it in an RDA and see whether its in fact hot spots that are the problem. Any takers?

On a side note, I remember it happened several times that I pulsed the coils, found no hot spots, installed it afterwards and bleh - nasty. Because I didn’t pulse them enough (enough is indicated by colour change, afaik - oxidation). Also, the pulsing helps in preventing electricity from switching between wraps instead of going through the wire - notice how all (at least all that I’ve seen) pre-built coils are spaced? Guess why.

Some great info here, I have tested an RDA with an un pulsed ready made simple round wire coil and it worked fine, no weird taste and looked to heat evenly…

I’ll try with a more exotic coil next

Ya won’t smell CO2 but it can really mess up your day… lol
I’d still suggest pulsing to burn off any residue, but that is of course just personal opinion, for all I know pulsing just might make any residue on the wire turn into a more harmful ash or other compound that is even worse than it originally is/was.

When you vape, your coil never glows it only heats up due to the moisture, would anything on the coil burn?? 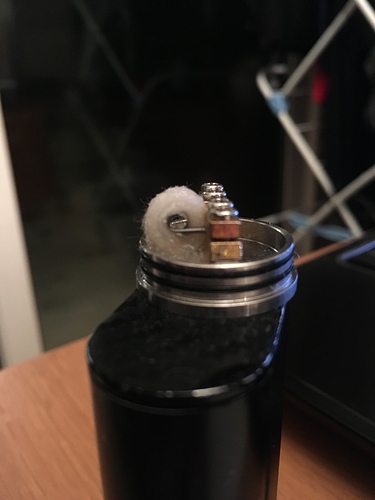 Never seen that before! What’s the deal? Thoughts on dragon builds?

Besides the hot spot check & residue burn off, I’ll use a pair of ceramic tweezers to squeeze the coil tighter while hot… if needed (before wicking).

Differences I can see:

Airflow has to go from end to end of coil

Just my 2 cents worth

I only make SPACED coils now because you never have hot spot problems with them.

Every pre-made coil I have ever taken apart has been a spaced coil and I would have to think the wire is cleaned somehow before it is made into a coil.

I do remember several members here made mention of some of the pre-made crown coils having a funny taste. I would suspect that was caused by the wire having residual machine oil that did not get cleaned off before the coil was made.

Why did I get a notification for this reply

Because your ‘Tracking’ button is on.