I am alarmed after seeing a list on the “tiki roar fa” thread showing that some of the flavor concentrates we purchase contain sugar syrup, corn syrup , fructose and even splenda! (flavor west grape soda) i have looked at the msds on sugar syrup info alas decomposition temperate is listed as unknown boiling point however is 105 C or 212F fairly certain my RDA exceeds these temperatures. Thoughts? Anyone contacted flavor west regarding their use of sugar syrup?

Here’s a list that’s been out for a while…

Read this posted over at Reddit DIY_eJuice https://www.reddit.com/r/DIY_eJuice/comments/49f487/just_got_off_the_phone_with_flavor_west/ I only have a few FW flavors, yellow cake being one (and apparently a big offender). What are your thoughts and concerns regarding this information?

keep in mind alot of these companies were making flavors for other things way before vaping , the use of these things in baking , candy making etc are common

Thank you gave the reddit thread a look. I have been aware of the issue for only a few months now but did not realize how many FW flavors included sugar syrup. I have and use(d) 13 Flavor west flavors that contain sugars. Flavors i will not be purchasing again. Have you ceased to use FW flavorings containing sugar syrup? Do you think if everyone boycotts these flavors FW will take a hint and take steps to remove the sugar syrup?

Agreed but FW is marketed for E liquids. When i began my DIY journey i had no clue where to get flavors. I began by searching for PG based, sugar free flavor extracts. Found many results and ordered many flavorings not marketed as vape flavoring. After dicovering TFA, FW, Capella and so on i just assumed they were sugar free

Have you ceased to use FW flavorings containing sugar syrup?

I’ve phased out their whole line from my mixes. I am interested in their Blueberry after conversations with @Ken_O_Where though.

Do you think if everyone boycotts these flavors FW will take a hint and take steps to remove the sugar syrup?

I can’t answer that one. Some people/vendors make a living on these low cost flavors.

Not to resurrect an old thread, but what exactly is the danger of vaping sugar? I’ve searched, and maybe my google-fu is lacking but all I found was a bunch of vague warnings about possible ingestion of Acrylamide from eating burnt foods. The info mostly pertains to sugary barbecue sauce and Acrylamide formation from the sugar. What am I missing? 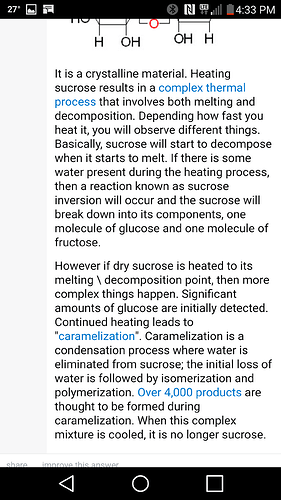 This is about sucrose (sugar) whereas FW include Sugar Syrup and or Fructose. The issue here is the carmelization. This is what occurs on your coils with FW yellow cake other FW no no flavors and in my opinion sucralose should also never be used. That “coil cake” would almost certaintly release whatever those 4000 products of chemical decomposition are, certainly those are nasties and many would be carcinogens…

Yeah, that’s the kind of thing I was looking for, where did you get it? Got a link?

Never mind, I found it
Thanks!

Why do other sugars melt whereas sucrose decomposes?

I also noticed that the presence of water will effect the rate and temperature at which “nasties” will appear. VG “breaks”(decomposition) before PG and releases Acrelion further heating then releases Formaldahyde. The presence of PG in the solution will increase the temperature required for chemical decomposition. This is not speculation but proven scientific finding and not NASA style religous science lol i read somewhere that adding distilled water may also reduce possibility of nasties being released and after reading more i am convinced. I will be testing at 75%VG/ 22-23PG% /2-3% DW now…

I noticed that they were talking about dry sucrose and how it had to shed water after breaking down into fructose and glucose before carmelization could take place but that isn’t necessarily true for dissolved sucrose in VG/PG though. And it seems the temperature threshold for the beginning of the process is 366F so below that temp it theoretically doesn’t happen. Anyway, there are some good links to follow and a study to read from that page you posted so I’ll get back to research!

This is actually a really good point and definitely worth exploring…

I swear Element Pink Lemonade uses real sugar; the vape literally smells sweet like no other and the liquid itself is foggy… Don’t know what they use or how they achieve it but it has to be bad for you because it is sooooo good, haha.

I think so too and if I was rich I’d send a sample in to be analyzed for chemical contents and percentages. Unfortunately I have more pressing things to spend $250 on, like bills!

Been looking into sugar, Malic, citric, and ascorbic test strips to perhaps derive what exactly they are using. The amounts can be tuned in as long as I am using the correct ingredients but those allude me.

Where would you send something to get tested for such things anyway? 250$ seems almost worth it to crack the damn recipe, it just tastes like nothing else.

It was $250 to have my well water tested after a well pump replacement, testing e-juice might be more expensive but there are a bunch of different testing labs on the net. These guys did my water testing and they also do food type testing.
http://www.intertek.com/food-healthcare/
I hadn’t put any serious thought into getting a sample tested, at least not yet. I’m content to continue to experiment for now. If we can’t crack it then yeah, I’d be up for cost sharing on a professional analysis.

Been looking into sugar, Malic, citric, and ascorbic test strips

Excellent idea! I didn’t even know there were such things.

In case we do decide to go that route