Impatience while “steeping”. It’s what makes the creation of e liquids so dang challenging.

I decided to try microwaving my fresh recipes in the nuke because of what I heard about the waves causing a reaction or disturbance at the molecular level. Then, I saw a posting on Reddit about it and they seemed to think aging sped up. Mixed with some streathing/breathing/cap off overnight/shaking, I think it’s worth considering. I actually put in 4-ish 10-15mL bottles for 3 minutes at power level 1, let them set out or put them in the freezer, then do it again over several days. I had nothing to compare to, which is my next experiment, but the flavors were accurate and one of them matched my 2-week “steep” of a recipe.

Considering juice gets pretty damn hot in the tank with no negative results (and in my opinion, better taste), I think 140° could be considered on the cool side where 180° might not be too hot to kill it, if that’s even possible. Either way, I pull out the bottles and they’re really warm but not scalding. I heard that something in the 180 range you can hold for 3 seconds without uber-discomfort so they’re getting to 160 or so. Temperature aside, the molecular agitation caused by microwave oven, imho, is worth considering.

The potential negative results (aside from overheating and melting the bottle) would be the effect on the nicotine. NIC doesn’t like heat. Best to add it after you’ve done your nuking. *Note, I am not an expert. I mention this because of things I’ve read here and elsewhere about nicotine and heat exposure. Hopefully a real expert will come along and add to this.

Hmmm. It may work but I would be worried about…

Molten ejuice from the microwave…hasn’t everybody burned a finger using the micro. Now let’s compound that with ejuice.

Ejuice bottles that are glass may not be microwave safe. Especially after multiple heat ups and coil downs. Let compound that with exploading glass. Funny story. I had a mason jar expload due to going from cold too warm due to pressure change on my birthday last year.

Yes. I believe in natural selection. But I die believe in at least a warning of… you mileage may vary and shit can get bad. So yeah. Go for it.

But another true story. Back in the day two years ago…I swore I would only really need 12 or so bottles, and i would just rotate through them. I did for a short period of time screw around with crock pot heating. Yup. It was really popular 2 years ago. But as I transitioned…crock pots and screwing around with water then rice and so on was a waste. So now I have way too many glass dripper bottles (yup I could mix enough juice to last me 3 months and still have empties) and I just let time do it’s magic.

Sure, it’s tough starting out…only have 12 bottles and the need to buy more flavors pg vg and such. But my life has been better just mixing 12-20 bottles ever 2-3 weeks on Saturday and age/steeping taking on all that work.

And yes I have had a 30ml bottle explode while attached to an electric knife for shaking. (It was a green cheap tinted bottle). So now I wear safety googles. Lol.

Your juice can be vaped at 180°… what are you going on about?

Maybe it’s Celsius? But yes. Many people like to vape with tc between the range of 400-500 F for a warm vape depending on the topper.

Reading it over again… I can only assume it’s in fahrenheit. nobody can hold anything that’s 180C without 3rd degree burns.

Would be nice to get the correct units in questions though. Only 5 countries in the world work with fahrenheit (the other 190 with celsius) so forgive my confusion.

Only 5 countries in the world work with fahrenheit (the other 190 with celsius) so forgive my confusion.

I had to go look it up 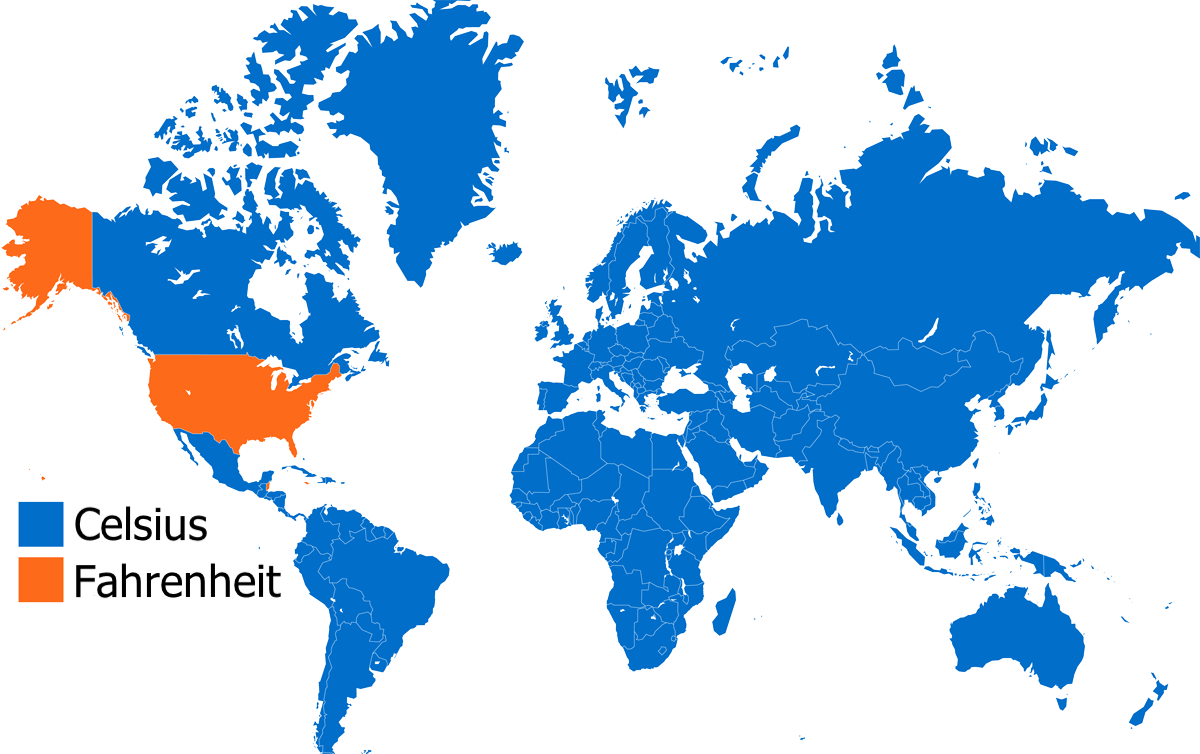 By the end of the 20th century, Fahrenheit was used as the official temperature scale only in the United States (including its unincorporated territories), its freely associated states in the Western Pacific (Palau, the Federated States of Micronesia and the Marshall Islands), the Bahamas, Belize, and the Cayman Islands.[4] All other countries in the world now use the Celsius scale, named after Swedish astronomer Anders Celsius, defined since 1954 by absolute zero being −273.15 °C and the triple point of water being at 0.01 °C.[5] (Before 1954, the Celsius scale was based on 0 °C for the freezing point of water and 100 °C for the boiling point of water at 1 atm.)

Dude just take a coffee cup third full of water nuke it for 30 seconds then sit your bottle in it to get warm then you can shake the crap out of it easily! That’s what I like to do! Not the same I know but ya!

Microwaves are infamous for creating hotspots with volcano like eruptions and third degree burns as a result. Remember e-juice both has a much higher viscosity and boiling point than water, so when things go wrong they can really go very wrong very fast!

And if the safety concern wasn’t enough, you also get serious nicotine degradation at the temperatures you are mentioning (I assume its Fahrenheit and not Celsius, which would be even worse), and it is pretty much impossible to actually control the temperature.

I’m also a bit surprised that you found this recipe for disaster on Reddit, as Reddit is normally full of warnings against using microwaves to heat e-juice. What subreddit was it on?

Interested in hearing what you come up with. I am currently using a protocol which involves heat, ultra sonic waves and homogenization.

I don’t own a microwave and have not interest in speed steeping with one. A pressure cooker that I might use for a low temp 8 hour bath… perhaps. I think time is the best friend to a flavor. A simple hot bath in a mug to make the vg more viscous for the initial mix is helpful… beyond that, time works for me. How many recipes are you making a week that you really want to rush things. I try to create things which come of age at over a range of time. 1 which blooms within the week, another which benefits form 4-6 weeks, as well as something that truly is exceptional after a 8-12 week hiatus (which I usually break into 2 portions, one for use around week 6 and the other so I can discover what it turns into much further down the road. Am I doing something wrong. I still haven;'t found a recipe which loses its flavor after the 2nd or 3rd week. I think it may have lost its ZING from the sharp notes that time softens into a confection yes, but that zing is usually something I consider an off note.

This sounds interesting i think ill try it in pyrex or borosilicate glass and without nicotine, ill add that later at room temp on a mag mixer.

Exactly. I usually don’t add nic for the aging as I don’t feel it’s an age-needed ingredient) and definitely don’t for the microwave. A day at most after adding nic, all is well and flavorful.

Side note, I have seen a dramatic drop in harshness within just a few minutes. Add it, vape it, cough. Or, add it, wait for just a little while, fine.

Farenheit temperature of the liquid in the bottle upon removing from the microwave. In other words, it’s not being toasted in this process, just being agitated.

True. But I’m not at all referring to the temperature of the juice; that’s an after-affect of the jiggling of the molecules. I just microwave it enough to (maybe) simulate mechanical homogenizing then cool it down to do it again. Sort of like using the ultrasonic cleaner devices - not just shaking things around but really getting everything moving at the microscopic level.

True. I’ve absolutely tasted the results of time and there is no substitute. I’m just sharing an idea and it appears it hasn’t been considered much, aside from the one article I read on Reddit. Like I said, I need to experiment.

appears it hasn’t been considered much

A quick search of the term “microwave” nets some results. This may tickle your fancy.

What happens to your juice during a “speed steep” is much like what happens to a wool sweater when “speed drying” instead of hanging it out to dry. You’re diminishing your flavors; degrading them with the prolonged exposure to heat. Your flavors are made up of volatiles- chemicals that are already fairly unstable in a solution. By adding heat to these volatiles, you’re causing them to change their structure entirely. The recommended way to use heat while mixing is to just warm the bottle to about 90F to make the VG thinner and easier to mix. DO NOT KEEP THE BOTTLE WARMER THAN ROOM TEMPERATURE FOR LONG PERIODS. The next layer of the steeping myth is of course the “best way to steep.” This includes ultrasonic steeping, venting, tumbling, Saws All (or similar power tool), shaking, and good ol’ time.

I've noticed a lot of misinformation being passed around within the new users, and I would like to take this time to address some of it. You're...

I have used the microwave a few times to help things along. Sadly, I don’t have much to add apart from the fact that I didn’t burn my fingers (‘hasn’t everybody burned a finger using the micro’). Nope.

There don’t seem to have been detrimental effects to microwaving if, like most things, it is done in moderation and common sense.
I zap a few bottles at a time for no longer than 15 seconds about twice and am sure to remove the caps before placing them on the revolving tray in the microwave. Then I ‘air out’ the bottles, close them and shake.
Done with all types of container - some plastic ones do get a little soft, but nothing too bad.

Let us know what you come up with! Thx